Ask Question
Asked 6 years, 2 months ago
Active 3 years, 11 months ago
Viewed 1k times
7
This question already has an answer here:
Cartoon with a young unicorn and a demon (1 answer)
Closed 2 years ago.

This was a movie I saw as a young child, which means it was probably made in the 80's or earlier, though conceivably it could have been early 90's. It was animated, but I don't recall if it was Japanese or Western.

The scene I remember most clearly is a young man coming to a house where an older man and woman live; I believe it was a son coming home to his parents. However, he now serves some sort of monstrous big-bad and has magical powers. I remember he made flowers grow out of his father's hair and one grow out of his nose. His mother brushes away the flowers from the hair but not the one on the nose.

Later, the big bad has some evil scheme going on that turns humans into these nondescript block people that look like they are crude stone carvings of people. They all start marching together, and you can tell that one of them is the boy's father because it still has a flower coming out of its nose.

I also remember a scene where the block people are climbing on each others' shoulders to make a big tower, and I think the main badguy is inside. The badguy himself is some sort of ghost or monster - I don't remember specifically, but I'm pretty sure he was non-human.

There might have been a unicorn as a major character in this story, but I may be confusing it with a different movie.

Does anyone know what show I'm talking about?

Unico in the Island of Magic.

The main character, Unico, is a unicorn.

Here's some excerpts from a plot summary:

The stranger winds up agreeing to let the cat serve him, as he needs someone to help him find other forest animals to turn into "living puppets." Unfortunately, the stranger can't seem to hit a moving target when it's the size of a rabbit or smaller, and when Melvin tries to point him towards Unico, Unico manages to get away and makes the two guys chasing him crash their tree into another tree.

Oh, and apparently the stranger is serving a "master" somewhere, which means we now have three layers of evilness going on.

He shows off a few magic tricks to his family, including making a small log turn into a doll, swinging a door shut, and making flowers sprout out of his father's head and face.

The link includes images of the flower magic, as well as the transformed parents. 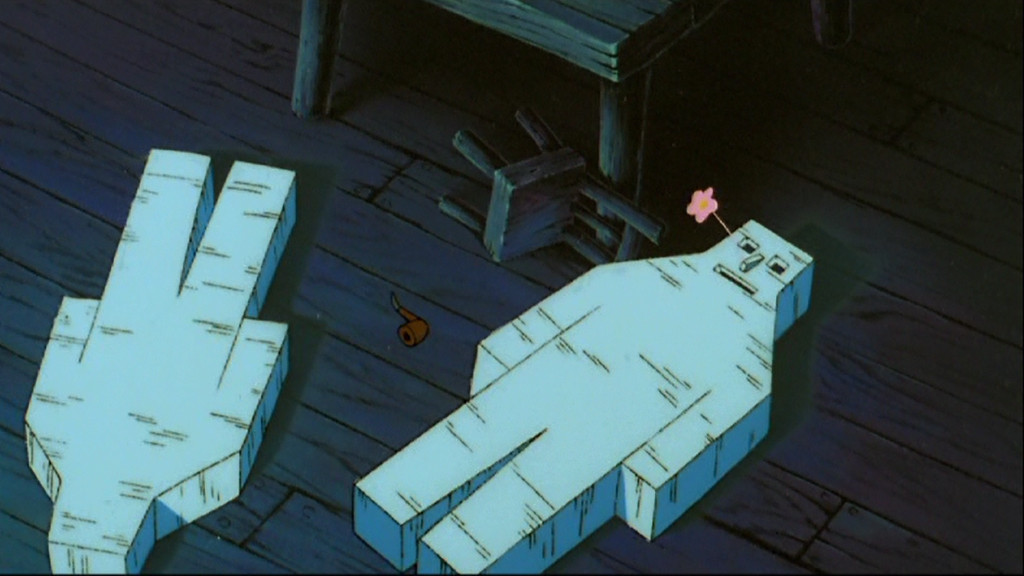 11
Cartoon with a young unicorn and a demon

12
SciFi/Horror movie featuring alien city landing in a US desert, forshadowed by cave paintings
10
Book where a young man gathers memories from formaldehyde-preserved animals and minds
9
1970's Horror TV movie?- about parasitic house-it gets young as inhabitants get older (fast) or die
15
Looking for young adult book, possible from the last 10-15 years
8
Looking for title of 1990s movie from memories of scenes
10
I’m looking for a fantasy book with a female protagonist with red hair, who climbs a sacred rock and sparks civil unrest
6
Father and Daughter land on Alien World
7
TV series in the 90s where people get superpower by sniffing flowers
5
Movie about aliens disguised as humans that turn out to be allergic to latex
9
A fantasy saga with big bad trees that suddenly appear, and make demons appear