What German movie has a woman in prison holding a wire in her mouth to survive?

I’m trying to identify a German sci-fi film that seemed to be based around a prison. It had lots of fetish wear in it. I saw it around 2000, so it’s from before that.

I think there was an escapee plot, with the two leads (male 30s / female 20s) also concerned with where they would go after they escaped.

The scene that I particularly remember is a predicament scene where a woman is holding a wire in her mouth and if she lets it go, she or someone else will die.

I realise this is a long shot but I would appreciate any help.

This is "The Perils of Gwendoline". There's a strong futuristic element, a concrete prison underground and extensive wearing of leather fetishwear (oh, mercy).

There's also a scene where the female character is placed into an eleborate trap where she'll be shot if she lets go of an object placed in her mouth. 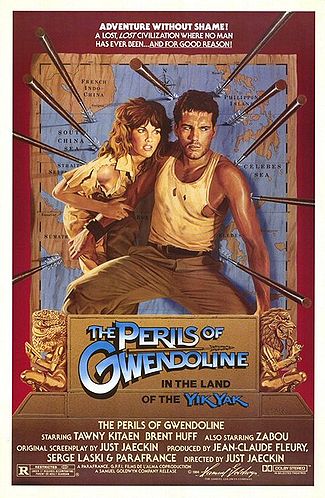 10
Short story about a woman who has lost her right to use science
9
Movie about a woman and her young daughter; a person they know killed her in her past life
9
animated movie about a man who falls in love with an alien who has no mouth
19
Movie where a bereaved woman raises an angel to help her cross over
7
Space sci-fi movie where a woman goes to space and loses her memory
12
Old movie (1950?) where a ghost protects a woman from her husband
7
Book series with a game designer getting shot by a crazed fan and being forced to be an NPC in a game session. Real world artifacts show up in game