How did Clara end up on Gallifrey?

When Clara is scattered throughout the Doctor's timeline, she's basically born several times (we see a child version of her, growing up). But she's still human. They're all copies of the original.

What's up with the Clara we see on Gallifrey, though? She's human, so she couldn't have been born to a Gallifreyan family, could she?

Hence, she should have been born within a human society (do we even know the Earth year?) and then traveled to Gallifrey to advise some Time Lord about which TARDIS to steal...

... This all sounds like a bunch of rubbish, especially because her copies didn't have proper memory of the Doctor. So my question is: how did Clara end up on Gallifrey?

Clara's mind was scattered throughout the Doctor's timestream, to help him at important points when the Great Intelligence tried to kill him. Different individuals lived wholly different lives, but had the same personality; there is nothing in there that suggests that each copy of her personality has to be human. Why would a tear in time be limited by mere biology?

If you want to go a bit esoteric, you can go and read Lungbarrow and learn that Time Lords are artificially created in 'looms'; it is possible, then, that the Time Lord!Clara came out of the loom as a human by some technically-possible-but-hilariously-improbable glitch in the system (hey, if the Doctor himself can be half-human...). But this is not actually necessary, for the reason stated above.

she's still human. They're all copies of the original.

Ah, my friend. You’re confusing the soufflé and the recipe. The recipe is for Clara to save the Doctor. That doesn’t have to mean human Clara, any more than it means the original Clara who was born in late-20th century England thanks to a leaf falling off a tree.

But, assuming the Clara we see on Gallifrey is human:

she should have been born within a human society (do we even know the Earth year?) and then traveled to Gallifrey to advise some Time Lord about which TARDIS to steal...

... This all sounds like a bunch of rubbish, especially because her copies didn't have proper memory of the Doctor.

No more rubbish, I’d argue, than Victorian nanny/tavern wench Clara following a stranger from an alleyway up an invisible ladder — there’s an assumption that even if some fragments of Clara don’t consciously remember the Doctor, they all have some sort of compulsion to get to where he is and help.

But given that we see Gallifreyan Clara in the repair shop for machines that can travel anywhere in time and space, it’s not unreasonable for this one to have been born anywheren (a new word I just invented to refer to the entirety of spacetime, tell your friends) and then made it to Gallifrey.

Then that's how an echo was on Gallifrey to help the Doctor. I'd like to know what her name was I suppose she had a long life; at least I hope so.

I was thinking that maybe Bonnie from the Zygon Invasion could be a Zygon version of her.

Someone I know was rather puzzled by the echoes where they born along Claras family tree or random families - I think it was random families because River said a million copies of Clara they could be anywhere any-time along the doctors timeline and even The Master noticed them at some time.

First, I don't think we can prove that every echo is human.  We don't know exactly how her echoes are produced.  For all we know, there could be Gallefreyan echoes, Sontaran echoes, Androgummy echoes and who knows what else.

But, for the sake of argument, let's pretend that they are.  Let's assume that each of Clara's echoes are physically identical clones.  Let's assume that they're all born to human parents in unsurprising ways.  Then the question is "how could a post-War human being end up on pre-War Gallifrey?"

But, in the general case, how does a pre-War human end up on pre-War Gallifrey?  By TARDIS, most likely (or did we call them SIDRATs in that era?)  Pre-War, very few Time Lords did the gallivanting about, rebel-without-a-cause renegade thing.  Very few -- but more than just the Doctor himself.  She could have been the companion of the Mad Monk, or the Corsair, or the Rani, or the Master, or any other Renegade Lord.

This doesn't seem far-fetched.  It almost seems inevitable.  The echoes of the Great Intelligence are all dedicated to giving the Doctor an endless series of really bad days.  At least some of them would try to nudge any of these Rival Renegades into the Doctor's way.  The simplest method for nudging them back out of the way is to give them distracting Companions.

I think at least one Clara had to become an earlier Renegade's Companion, and she was just left to her own devices in the repair bay long enough to recommend Sexy as a TARDIS worth stealing.  I figure she also caused a big enough distraction to keep that Renegade from following the Doctor and prematurely ending his career, in spite of whatever the GI did to put the Rival Renegade on the Doctor's heels.

If there's one comparison we can make to past stories, it's Scaroth of the Jagaroth. Like Clara, he was scattered across time; unlike Clara he was able to communicate with his other time-forms. But the idea is similar.

We know of at least two examples of her having a complete life before The Doctor - those from Snowmen and Asylum. but there's also the possibility that sometimes she "pops into" time, possible even into other bodies, a la Quantum Leap,to help The Doctor when needed, fading away when the deed is done. 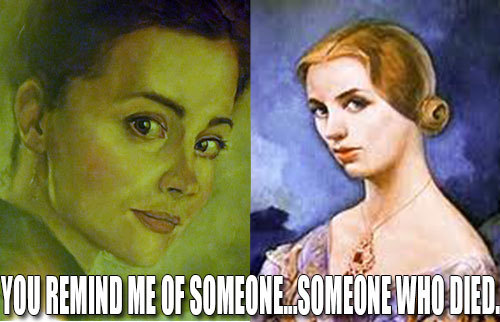 (It's okay if you don't get this reference)

Imagine if you will the idea that some of those "Clarallels" have a better awareness of their mission than others. So in the montage of Clarae showing up in past episodes, sometimes she seems to know what she needs to do - tirn a knob, bonk an alien, etc. So let's suppose that the further back she goes, perhaps the more awareness she knows of the job she has to do. So by the time she's back at (effectively) the beginning of The Doctor's story, she knows exactly where she needs to be, and what she needs to do. That's slightly more easy to accept that by the sheerest chance she's born to a Gallifreyan family, gets a job guarding the disused Types 40, and stands right by the "right" one to advise the about to be Renegade to take it instead of the one he planned to take.

We only ever see the original Clara as a baby. The original Clara, born to human parents, is the one that "came into this world on a leaf"; that is she carried around the leaf that her parents found when they met and kept. It is this Clara that enters The Doctor's timestream on Trenzalore and gets scattered throughout his timeline. The Doctor rescues her from this state and she returns to travelling with him, but she is already scattered throughout his life.

All of the other 'Claras' that The Doctor encounters have different backstories, born in different places at different times, but all crossing over with The Doctor's timestream. I see no reason why she couldn't have been born on Gallifrey, as the majority of the first Doctor's life appears to have been on that planet.

17
How was Clara supposed to save the Doctor if she actually lost her memory?
7
Why doesn't the Doctor go back to Gallifrey before the Time War?
8
Time of the Doctor v/s happenings of Name of the Doctor
6
In "Listen", how did Clara manage to land on the past Gallifrey?

4
Why was the Tardis in a museum?
20
Why couldn't Clara see future incarnations past the "11th" doctor?
32
How did the Timelords give the Doctor New Regenerations without messing up the Universe?
9
How did the meta-crisis Doctor survive (or remain sane) when Doctor-Donna didn’t?
7
Why doesn't the Doctor go back to Gallifrey before the Time War?
19
Hasn't The Doctor broken his promise before?
15
How can Ashildr pilot a TARDIS?
6
In "Listen", how did Clara manage to land on the past Gallifrey?