Has the Star Wars universe caught up to our time?

Star Wars is set "a long time ago", but I know there have been an expanded universe. Has that universe's time caught up to our time line yet?

The only answer I can find is what I call a Lucasism. In other words, it's a situation that was developed to fit, as one person called it, The Rule of Cool, without regard for fact or science. Once it's been created and fit into official canon, then there's a lot of rationalization to explain it, so, in the long run you end up with more explanation than cool. In the end, I feel like there's a lot of contradictory facts, but then again, this is the Lucasverse.

(I'm not going to focus on what has already been stated or proven in other questions on SE:SF&F, but I will summarize.) 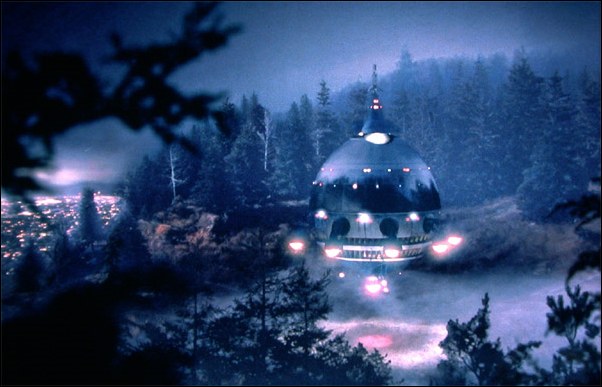 By putting the Brodo Asogi onscreen in The Phantom Menace, Lucas linked the two worlds. When the expedition was included, that not only establishes the two as being in the same universe, but since that expedition was intended the one that reached Earth, it joins Earth in the 1980s with Star Wars, no matter how long ago or far away it supposedly took place.

So allowing for a lifespan of, say, somewhere under 200 years for the Brodo Asogi, by putting them on screen, Lucas has essentially given us a connection to say that 22 BBY was less than a few hundred years ago.

While this may not seem to be "a long time ago," if we accept the Star Wars references to the Brodo Asogi, then, while the light from the Star Wars galaxy may not reach us for millions of years, a ship on an expedition planned before the birth of Luke Skywalker already has reached us about 30 years ago.

Which would lead to the conclusion that Luke Skywalker was born less then a few hundred years ago. That would put the time line, which currently ends approximately 140 BBY recent enough to be concurrent with recorded human history.

It's also possible that, since the expedition left and might take a couple hundred years, that the Star Wars timeline has not quite caught up to the time when that expedition reaches Earth, but it's certainly a lot closer than it feels when we think of "A long time ago in a galaxy far, far away."

No. Based on the answer in the related question (thanks, DampeS8N!) the SW galaxy is roughly 3 million light years away.

The Expanded Universe has a latest date of 138 ABY (138 years after the battle of Yavin).

The Vong traveled for generations in extragalactic space without finding another galaxy, so it seems unlikely that the Battle of Yavin happened less than 140 years ago, there's simply no time from word of the events to have traveled 3 million light years.

If the species seen in The Phantom Menace which resembles E.T. DID create engines capable of extragalactic travel, such engines would have (by necessity) given ships much higher speed within a galaxy - empty space is pretty much the same, whether it's between two fairly close stars or two fairly close galaxies.

We see no such advances in engine technology anywhere in the Expanded Universe. Therefore, I doubt the EU happens within the past 140 years. It's far more likely that another thousand or so generations have gone bye.

I just found a interesting article : A Chart That Explains How Long Ago Star Wars Actually Took Place on io9. It places Cade Skywalker leaving the Jedi Order in 1941. So no, it would not have caught up to our time line yet.

So, it's not really canon, but it's the best I could find.

There was a proposed SW novel, never finished and now held non-cannon, that intended to link Lucas' first film THX-1138 with the Star Wars universe as an explanation for how humans got to the SW galaxy. In it THX and about 500 other humans from the 25th century escape Earth in a rocket ship. The ship falls through a wormhole in BOTH TIME AND SPACE that drops them in the distant SW galaxy many thousands of years ago, either before or at the beginning of the Infinite Empire. It establishes a genealogy of sorts for the origin of some family names like Skywalker and why some historians believe Coruscant may be the UNKNOWN original homeworld of humanity. You can research it all up on Wookieepedia.

What we do get from this is that there is no official SW explanation of where humans came from and that the distances between major galaxies is too far for even hyperdrive engines to traverse. If the E.T. Easter-egg appearance is taken seriously as the same race as in the film E.T., then we'd have to assume that this exploration craft of theirs fell through the same wormhole which is bridging 1980s on our end to whenever they launched (20 ABY?) on the SW end.

This still would allow for millions of years difference between Star Wars time and our time since all that is defined in canon is that the Star Wars saga occurs "a long time ago in a galaxy far, far away." This is why every date in Star Wars is measured from either before or after the Battle of Yavin because its the only touchstone we have for the saga.

Even if SW occurred in the Andromeda galaxy, our nearest neighbor, it would be 2,538,000 light years away. So a hyperdrive ship used to refueling after a few weeks of flight at less than 130,000 LY (diameter of the galaxy) wouldn't make it to there and back without a lot of tweaking. Nobody is going to be willing to take a near lightspeed journey for 2.5 million years. Even if ship time was dilated to near zero there would be no point in returning. Either E.T. has escaped the SW galaxy in a multi-million year colony ship, is an unrelated species and just happens to look the same, or found a lost wormhole between the SW and our galaxies that possibly could explain how humans got from one to the other in the past. If E.T. gets back to Coruscant and tells the Senate how he met some humans on a lost world in another galaxy, he could become rich as the discoverer of humanity's lost homeworld. E.T. could be his species' version of Indiana Jones.

78
Why are there humans in the Star Wars Universe?
205
Are E.T. and Star Wars in the same universe?
35
When did Star Wars take place?
37
Is "My Little Pony: Friendship is Magic" canon with Star Trek?
49
Has the light from the Star Wars galaxy reached us yet?
14
What was the thermal exhaust port on the first Death Star venting?