I am referring specifically to the MCU version, but if it's ever shown in the comics continuity that will work too.

During the films there are times when Cap will either sling his shield on his back or pull it from his back very smoothly, without pulling his arms through the straps in the shield. Is this just for "Rule of Cool" or is there an actual way he's attaching and removing it from his back? Is it maybe magnetic, a hook and loop, Hulk level velcro? You can clearly see on all three versions of his uniform he wears some kind of shoulder holster apparatus that's not attached to the shield itself, but it just looks like two loops of leather and a metal bracket in the center of his back. The forearm straps would have to remain tight in order to maintain a snug fit for protection when in use, so I don't think he's loosening them and sliding his arms through in such a fluid motion.

The shield system used in Captain America could be facilitated without a whole lot of super-science using an electromagnetic system mounted inside the shield or using the shield itself.

This system makes the most sense since we don't see Captain America strapping the shield back on, like he does in the comics, and there is no visible harness being used in the movies. 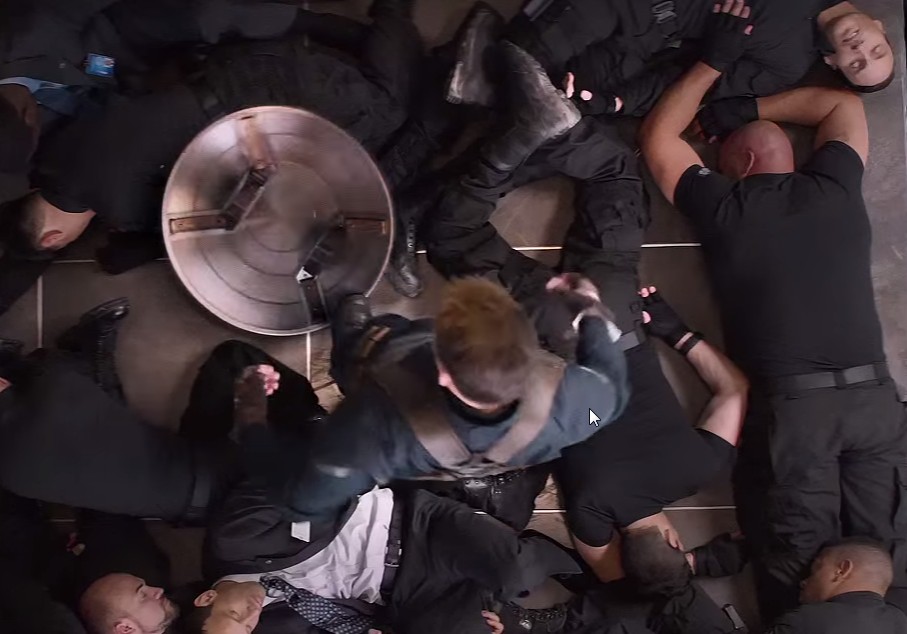 Here is a clip showing the inside of the shield from the awesome elevator fight scene. Note there are arm clips for his arms and hands and nothing else.

This is mostly an educated guess based on experience building practical props. I haven't been able to find any interviews or articles discussing the practicality of wearing the shield yet.

As far as the movie goes, I think the only method that makes any sense is a magnet. In the comic version, the straps of the shield are often visible over Cap's shoulders, indicating that an arm goes through each strap. In the movie, though, he just slaps that thing on his back and keeps going. It's obviously separate from the straps seen on the uniform shoulders, which is the harness you described.

If the metal bracket on his back had a magnet strong enough to hold the shield in place, it would snap on fairly effortlessly. The problem would be getting it to snap in place the same time every time. Of course, that's where the movie magic comes in - we don't see the numerous takes where Chris Evans went to slap that shield on his back and it clasped in place crooked or went flying off to hit a crew-member.

I would also assume that they have two versions of the shield, with one being a bit flatter than the "hero" version which is pretty curved. The curved version we see in several close-ups would be difficult to attach via magnet, since the center would be the furthest point away from the magnet. A flatter version with only a moderate curve (or a non-concave center and curved edges) would snap into place much easier, and would be used for the separate shots where he puts the shield on his back.

If you're interested in further reading, here's an RPF discussion where the topic is looked at from a more practical angle:

UPDATE: So far I've only been able to find one production photo that shows the back of the suit, and this is a stuntman so this version of the shield harness may be for looks only. If it IS functional, it supports either the magnet theory (probably located in the flat center section) or the slot/notch theory discussed in the forum link above. 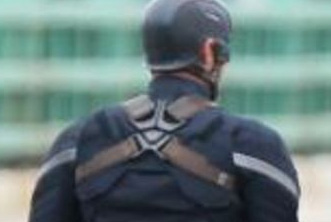 I noticed in the second movie, all of "The Winter Soldier's" holsters were magnetic. There's nothing covering the firearms like a conventional holster, they just kinda stick to him where the harness is. He wears a similar shoulder rig to Caps and he has that small SMG on his back. He has a drop holster on each hip with his handguns stuck in place too.

Based on this, a magnetic harness for Caps shield seems plausible.

Listening to the sound it makes whenever he slings the shield on his back as well as the "snapping" nature in how it looks when he does so leads me to believe the creators want you to think its magnetic. This doesn't prove that the practical application is actually magnetic as foley artists could add whatever sound they were directed to add in. But it does make sense that the prop was actually built with a magnet as well. If the shield was made light enough it wouldn't be much of a problem with the proper design and magnet placement.

I always assumed Cap has a magnet on his back and that that's how it is supposed to work in the movies.

However, I just read Magneto has no power over Cap's shield. Either the movies did not take this into account or they are hoping they never meet because if they do SOMEBODY has some double talking to do.

The again maybe it is a Stark reverse repulsor device...

Not the answer you're looking for? Browse other questions tagged marvel-cinematic-universe avengers marvel captain-america captain-america-the-winter-soldier or ask your own question.

31
Is Magneto able to manipulate Vibranium?