Was the original Death Star prop actually blown up for the movie?

I've read in the past that the original Death Star prop was blown up for the movie scene. Today I came across this and was wondering if there was any truth to that rumor. 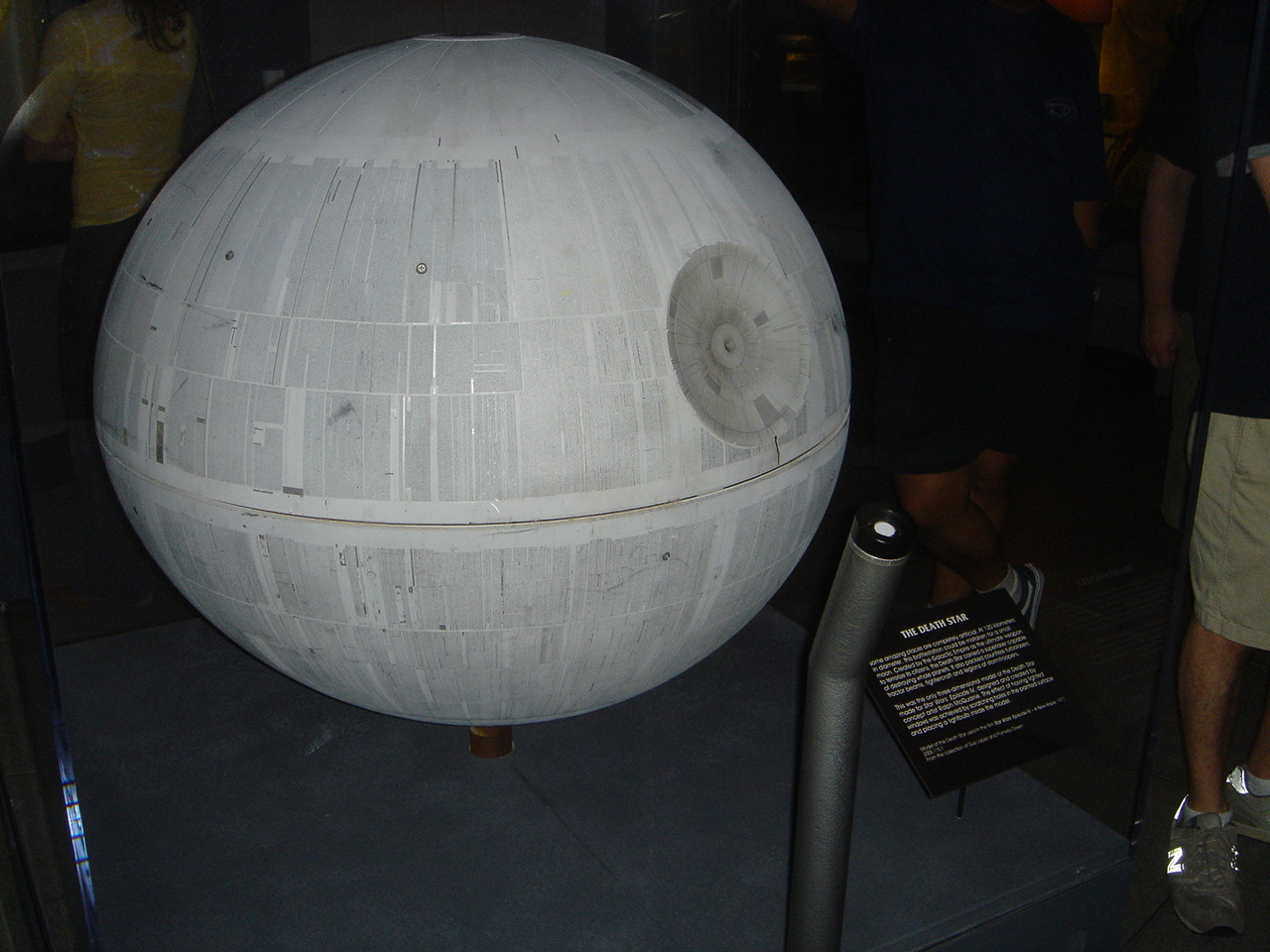 According to the description in the last page of this article (pdf), it doesn't sound like they blew up the prop itself, since they describe creating the effect by filming the explosion of a "cardboard container of black powder mixed with titanium shavings" against a black background.

He [special effects artist Joe Viskocil] reasoned that since there is no air and no gravity in space, the explosion should be perfectly spherical and not lopsided or squashed. To get a perfectly symmetric effect, he put the camera on the ground and filmed straight up.

A cardboard container of black powder mixed with titanium shavings was suspended from the studio’s ceiling. Black powder is a mixture of sulfur, potassium nitrate (kNo3), and charcoal—a black substance made mostly of carbon, along with other chemicals, and resulting from the heating of wood. When the black powder ignited, sparks and debris were propelled toward the camera as if travel- ling outward in the vacuum of space. The technique was so successful that it has been copied many times since then.

Looking on Google Books, I found a series of helpful snippets in this bundle of Cinefantastique issues (it says it includes volumes 5-7, googling around I see each volume was for a different year and those volumes 5-7 were from 1976, 1977 and 1978... my guess is that the snippet would be from their "Star Wars Special Double Issue", vol 6 #4 and vol 7 #1, published in 1978). If you plug any sentence or extended phrase from the following into a Google Books search you get that Cinefantastique collection:

So, it seems they first filmed the explosion, then double-exposed it over the Death Star miniature. Also found this snippet from the same bundle addressing why they didn't blow up the actual prop (typos are left unedited):

It certainly seems to be real. You can see the same prop in the photo below, which the one on display in Missouri matches perfectly.

That doesn't obviously mean that it's real (e.g. as opposed to merely being a very very convincing replica) but the lack of a debunking statement from LucasFilm who then offered to buy it and the interesting provenance lend a large amount of weight to the suggestion that the model was simply disposed of.

Ultimately it was purchased by Gus Lopez, the owner of the largest collection of SW memorabilia (outside of Skywalker Ranch) who's happy to vouch for its authenticity, along with the EMP Science Fiction Museum in Seattle who had the model on loan for nearly three years.

Since it exists, I think we can be fairly sure that they didn't blow it up. 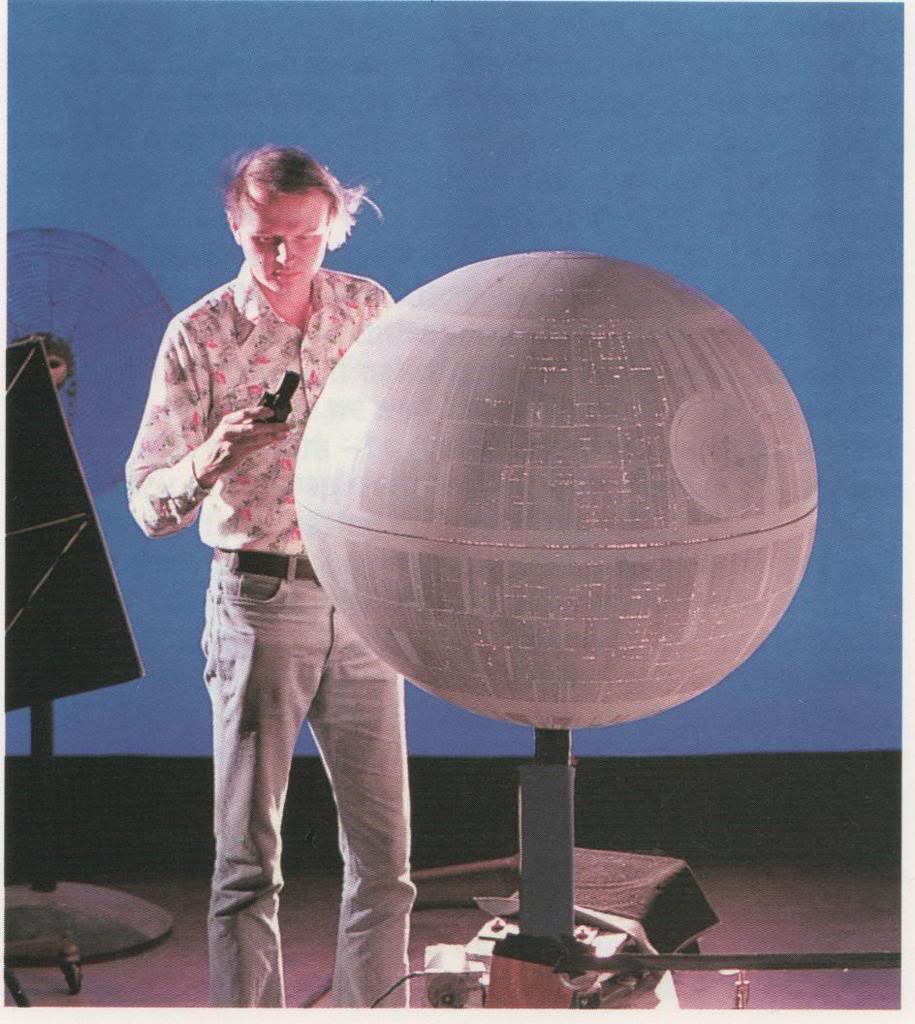 The Death Star was blown up, Joe Viskocil told me so. I was Joe's girlfriend for nine years before he passed away last summer. I love Sci-fi and I was privileged to attend many comic conventions with Joe, see the making of several explosions and pick his brain about how it was all done.

The FX department created several models of the same ship at different scales, some are used to film different angles and the smaller model is usually used to create pyrotechnics effects, explosions that are filmed at about 300 frames per second so that when they show the explosion it's in slow motion (so we can enjoy the debris and the roar of the fire) The "selling shot" he use to call it, the shot they use in the trailer that sells the movie. Ka-Boom!

Joe Viskocil was very proud of his work in Star Wars. He was extremely disappointed that George Lucas added a ring to the original explosion when he re-released the DVD. We saw the movie together "The People vs. George Lucas"; so many changes in the DVD release, disappointing the hardcore fans that he changed most of it back to the original for the blu-ray.

Secrets of movie magic; if you watch "A New Hope", the hand that puts the message into C3PO is not Leia's but Joe Viskocil's hand . There is another shot of his hand a little later pushing buttons of the ship (close up).

Not the answer you're looking for? Browse other questions tagged star-wars a-new-hope behind-the-scenes death-star props or ask your own question.

36
What evidence is there that proves/disproves there was a Gemini Earth Astronaut that appeared in the original Star Wars Cantina scene?
12
How far was the death star from Alderaan when it blew the planet up?
16
Was the Death Star built for use against the Yuuzhan Vong?
33
Why didn't the original Death Star's shields protect against small fighters?
59
Was the original Star Wars film originally called "The Star Wars"?
38
Did Vader actually die in the original Star Wars movie, now known as A New Hope?
19
Are there any designs for Sulu's rising targeting scanner prop from Star Trek: The Original Series?
27
Was the Batman statue in "Shazam!" a real piece of merch, or just a movie prop?
31
What is the reason for the adornments hidden under the dome of the hemispherical droid prop from A New Hope?