Is Quidditch an inherently flawed sport?

I realise it's self evidently impossible, since real people don't have flying broomsticks. But even allowing for its fantastic nature, am I not right in thinking that it's alse self evidently unworkable as a sport?

Why? Because catching the snitch is all that matters.

It's worth 150 points, and ends the game. Most matches we read about in the books don't have score lines that differ by more than 150 points, in which catching it wins the game for the seeker's team.

But even if a team is down by 150 points or more, it's logical that their seeker should then stop looking for the snitch. If they catch it, the game ends as a loss for their team.

Either way, only the seeker and the snitch matter. So why bother with the goals at all? Why not just beaters, bludgers, snitch and seekers?

I realised this at the very first description of a Quidditch match in the very first book. And while I appreciate it has some narrative value, allowing Harry to take center stage as a Quidditch player, it spoiled all the Quidditch sequences in the whole series for me.

Am I right, or did I miss something?

Harry Potter in a rationalist fanfic called Harry Potter and the Methods of Rationality discusses Quidditch's failings and comes up with a relatively simple solution: eliminate the Snitch and put the game on a timer. If something like that were done, Quidditch would end up looking something like basketball crossed with rugby, and would be an essentially normal sport.

Though it's true that Quidditch seems flawed, that may be the wrong question to ask. The real question is: does the unreasonable structure of the game make it a flaw in the world of the books? I don't think so: after all, the wizard world has many aspects that are satirical or frankly farcical; it's a place of commonplace fantasy, general whimsy, and frequent illogic. It's actually more difficult to name some everyday aspect of it that seems reasonable than the opposite. So, as a world-building decision, Quidditch fits right in: it's a satire of popular real sports that's accepted unquestioningly by the wizards because of its magical nature.

(This is not to say that there are no serious themes in that world; obviously, there are, as comes out as the series progresses. But the superficial aspects are silly, and this sport is very superficial.)

Yes. The sport is inherently flawed, and intentionally so.

In handwritten notes that she has added to an auction copy of Harry Potter and the Philosopher's Stone, Rowling admits that her goal was to create a sport that would fit in with the character of wizarding society, even at the cost of it making logical sense.

“Quidditch - was invented in a small hotel in Manchester after a row with my then boyfriend.

“I had been pondering the things that hold a society together, cause it to congregate and signify its particular character and knew I needed a sport.

“It infuriates men, in my experience (why is the Snitch so valuable etc), which is quite satisfying given my state of mind when I invented it.” 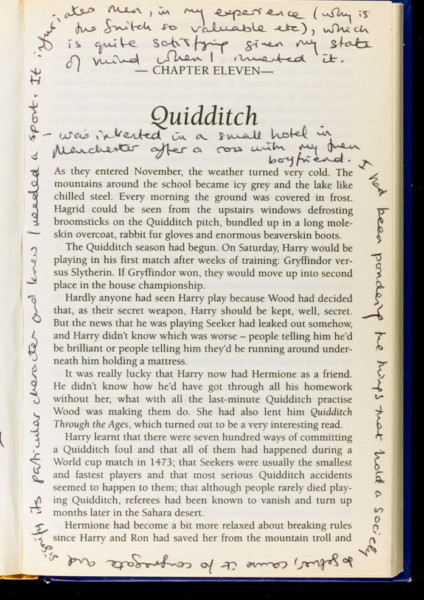 As they show in Harry Potter and Goblet of Fire, during the "Quidditch world cup" Victor Krum caught the snitch yet his team still lost. In the book, they talk a lot about how some Quidditch games can last for hours in which that case the score keeps going up. Should your team be loosing, your seeker still has to watch for the snitch to at least deter the opposing seeker from catching the snitch. And as in Goblet of Fire Krum knew his team was never going to catch back up so he ended the game on his terms. Another thing to think about is that yes at Hogwarts getting the snitch typically wins the game for that team, that is a team of high school aged players and not how it works on the professional level. Again, the snitch can show up after 2 minutes or after days as I believe Oliver Wood tells Harry in the first book.

According to J.K. Rowling, Quidditch is "not illogical" and "makes total sense".

Q: Can I ask about Quidditch?

They just think it’s illogical. But it’s not illogical and I had a speech by Dumbledore in the first book that never made it in explaining why Quidditch is not illogical, so at some point1 I will put that on the site. Thank you for reminding me.
J.K. Rowling - Pottermore Press Conference - June 2011

1. J.K. Rowling never ended up putting this on Pottermore.

Q. The scoring system of Quidditch makes no sense.

J.K. Rowling: It makes total sense. There's glamour in chasing an elusive lucky break, but teamwork and persistence can still win the day. Everyone's vulnerable to blows of fate and obstructive people, and success means rising above them. Quidditch is the human condition. You're welcome.
J.K. Rowling - Twitter - October 2018

There is a lot more to quidditch than you see in one game. There is a lot of strategy involved and all players have vital roles in that strategy. A team can catch the snitch and lose the game yet still when the cup if their points for the season are higher than the opponents. Even in the first game of the season the seeker would want to catch the snitch as soon as possible so the other team can't build up points that will matter later in the season.

My impression is that it is not a bad as it seems at first sight.

Firstly the idea that one key player can potentially dominate the game isn't a fatal flaw, for example in cycling and motor-sports the lead rider or driver respectively have a special role even though they are still very much collaborative team sports. Even in team field sports there is often a 'star player'...as noted in the comments this could be a quarterback in American Football, a fast bowler in cricket or a specialist place kicker in Rugby.

Secondly it does seem that in leagues the number of points scored in a match matters so it can still be an advantage to have a strong team who can rack up the points. Equally there is a strong random element to how quickly the snitch is caught so if a game drags on there is more chance that the overall stronger team will win.

There are even a few mainstream real-world sports which aren't so different for example in association football (soccer) matches tend to be low scoring and can easily be won by a stroke of luck against the run of play. Again cricket a game played where scores rack up to the hundreds and overs, balls, wickets and runs are counted it is still perfectly normal for a match to end in a draw and one really good player can dominate.

Indeed there is one match in the books where Harry has to keep an eye on the wining margin for the sake of the overall league result, this means not only not catching the snitch himself but preventing the opposing seeker from doing so too. You can also imagine a situation where you have more defensively minded seekers who are more focused on preventing the other seeker from catching the snitch untill his team have built up a winning margin.

Similarly you can see the beaters as the link which make the game make a bit more sense as they can act either defensively or offensively and target/protect either seekers, chasers or both so strong chasers may attract more bludger attention from the opposing beaters and take the heat off the seeker.

We also have to bear in mind that most of the Quidditch we see in the books is under 17 intra school level and so can't be really expected to demonstrate the full nuances of the professional game and most of the games we do see are there to demonstrate the unusual skill of the main protagonist. In fact the only professional game described in any detail is the World Cup Final in Goblet of Fire where the result goes against the snitch capture.

It's worth noting that from the readers eyes, with the exception of the Quidditch world cup, we're watching school children play it. Go watch a high school chess club and then watch the world chess tournament. In the high school chess club. The winner will effectively use the queen, but in the world chess tournament the queens power is mitigated by the knowledge and experience of the players*.

If I recall correctly, we do see some anti-seeker strategy utilized in the game, but it's portrayed in a negative light, because see it from the eyes of the seeker for a given team. For example, Draco Malfoy distracted Harry by feigning a dive for the snitch. Additionally, Opposition beaters would throw bludgers at Harry. We could probably expect more of this in pro-level quidditch matches.

*Chess people, it's an analogy, even if I'm wrong you get the point.

I agree that, based on the games that appear in the books, 150 points for catching the Snitch appears to be too many for the game-play to be balanced. However, I don't agree that makes Quidditch "inherently flawed", or that goals scored are necessarily irrelevant.

Let's say that the number of points for catching the Snitch is "Q". Throughout the match, both teams try to score goals and prevent their opponents from scoring. If neither team has a lead of more than Q points, both Seekers will try to catch the Snitch and will win the game if they do so.

If either team establishes a lead of more than Q points, that takes the opposing Seeker out of the game (he or she can't catch the Snitch as that would result in loosing the game). While this is the case, the trailing team must try to get back within Q points while the leading team's Seeker tries to catch the Snitch to end the game.

As long as it is feasible for a team to establish a lead of Q points before the Snitch is caught, the game-play seems reasonable. As I said at the beginning, it seems that, in the games described in the books, Q should be less than 150 points.

Proponents of limited over cricket and those concerned with productivity in the wizarding world might also want to impose a time limit of (perhaps) one day.

8
Does anyone express concerns about Quidditch?
1
Has JK Rowling ever commented on whether logical inconsistencies in her world are deliberate allegories?

13
In Quidditch could the Seeker play other positions?
33
Could another player catch the Snitch?
27
How can a Seeker practice if the Snitch can't be touched prior to a Quidditch match?
37
How would Quidditch resolve a tie?
6
Barring Acts of Dumbledore, does the House Cup always go to the Quidditch Cup Winners?
6
What sort of enchantments are placed on Snitches?
12
Are Quidditch teams restricted to 7 players in a squad?
48
Why didn't Gryffindor already have a Quidditch Seeker before Harry's appointment?
43
Why did Victor Krum catch the Snitch in the Quidditch World Cup?
3
If the seeker only touches the snitch, would that count as catching it?