Book about a time-traveling dinosaur hunter

I read a book back in the late 70's and here's what I remember:

There were a group of people who 'bought a tour' to time travel back to the dinosaur era.
They travel on a disc shaped platform.
There is some trouble and some die.
The main hunter/protagonist goes off and hunts down the T-Rex that is causing the problems.
In the end, the T-Rex almost destroys the platform, but at the end of the hunt/fight, the protagonist kills the T-Rex and only the head remains, on the saucer, so that the remainder of the party now has a trophy.

I remember that the weapons were discussed quite a bit, and were not 'big game/big bore rifles' like we have today. They were 'Sci-Fi', not laser, but maybe particle weapons, or mass weapons of some kind.

I do know it is not Turok nor “A Sound of Thunder”.

This might be David Gerrold's novel "Deathbeast" (1981, a little later than what you remember, but very close)

The plot has two guides leading a party of hunters and photographers on a disc-shaped time travel device to the late Cretaceous to hunt dinosaurs. They're attacked very soon after arriving by a massive Tyrannosaurus, which slaughters a third of the party and escapes after being heavily wounded. One of the hunters insists on tracking it, and a sort of Ahab vs. Moby Dick situation develops between the humans - some of whom only want to go home - and the pain-maddened dinosaur. There is lots of description about their computerized tracking devices and the weapons, which use a sort of heat beam to cook the dinosaurs alive from the inside out. The novels ends with a scene just like you describe, with the battered few humans racing the dinosaur back to their time-travel platform, and managing to kill is just as it collapses on them. 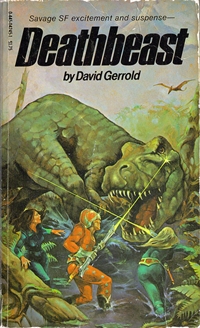 You seem to be describing A Sound of Thunder by Ray Bradbury.

It has time traveling hunters tracking down a T-Rex. They travel on a special path to avoid contaminating the timeline. One of them goes off and messes things up.

The points that don't match is the 'some trouble and some die'. The 'disk shaped platform' rather than a 'path' and the 'only the head remains' with the trophy. That said, there have been multiple adaptations of it (comic book for example) that could have changed some of the specifics of the original story.

You can read it at Scary For Kids that also contains some frames of a comic book version.

Sounds like one or more of the Time Safari stories by David Drake.

Henry Vickers's job is to keep clients safe from the dinosaurs they're hunting. That's the easy part. The hard part is to keep the clients safe from themselves and each other. Men with enough money to go into the past to hunt the largest land animals of all time are powerful and self-willed. Some make an effort to act like decent human beings, but more are selfish, stupid, sadistic--or all three together. The few women are likely to be worse.

But no matter how detached Vickers tries to be, eventually there are moral questions that he can't ignore. And when Henry Vickers starts to behave like a human being instead of a hunting guide, things get really dangerous.