I cannot remember the name of the story or the author. The story is about a soldier that gets abducted by aliens who are planning to invade Earth. They are reading his mind in order to discover Earth's military capabilities. This soldier happens to be a sci-fi reader and when he realizes what is happening, he uses his imagination to project images of advanced high tech weapons. The aliens are convinced that Earth is too powerful for them and leave, returning the soldier back to where and when it started with no one else aware that he saved the planet. I told my sons about this story and now they want to read it.

It's "The Last Full Measure" by George Alec Effinger. It appeared in the May-June 1978 issue of Isaac Asimov's Science Fiction Magazine. (ISFDB link) 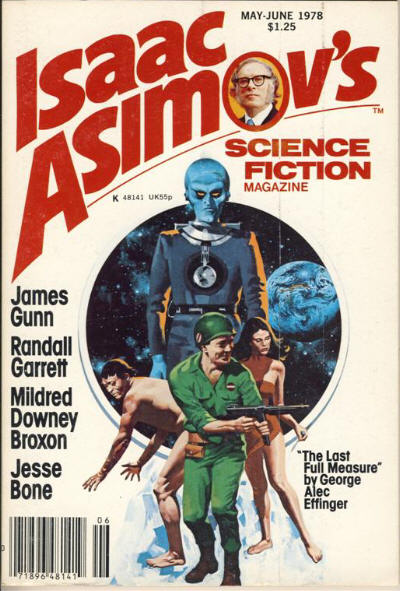 Bo Steaffler, a young US Army corporal is participating in the 1944 D-Day landings. Shortly after he hits the beach, he is killed by an explosion. However, he awakes to find himself uninjured and imprisoned in a dark dank cell. He is confronted by a strange creature with hypnotically luminous eyes, identified only as 'Aensa'. The creature communicates telepathically with him, questioning Steaffler as to the weapons and strategies used in the landings, but he's only a corporal and doesn't know much.

The Aensa sends him back to the beaches and when he is again killed, recovers him again. Steaffler, a pulp science fiction enthusiast, eventually realises that the creature is part of a potential invasion of Earth and seeks information on its defences. He projects telepathic visions of all the crazy weapons he has read about in magazines and creates a galaxy-wide scenario for the war.

The Aensa is more and more concerned that Earth may not be ready for invasion, and flings Steaffler back into his own time and place. He is again - finally - killed and as his thoughts fade, he remembers only "We won".

20
Identify short story in which invention of music redeems humanity from alien death sentence
10
Aliens try to invade Earth, but are quickly caught because their template was socially unusual
30
Searching this story: Invasion of tiny aliens who are destroyed by a single footstep
10
Short story about mind-hijacking aliens (60s or 70s)
7
Sci-fi book series with modern Arthurian legends with Excalibur as a spaceship
12
Wealthy businessman makes a deal with aliens to remove non-productive people from Earth