I saw this movie a while ago and I remember a lot of images of huge desert landscapes and a man/woman fighting over the control of a huge truck (or maybe they had a truck each and were fighting over something else, I can't remember straight).

The truck was an armored vehicle roughly the size of a semi-truck without the trailer. The movie should have been relatively recent but seemed to be quite low-budget.

I believe it should have been a post-apocalyptic movie but I can't really remember anything about the story, just those images.

The footage of the movie had colour editing and it was saturated in tones of orange, it should be easy to identify by this colour treatment since it's something you don't see very often.

Could it be the 1983 film Spacehunter: Adventures in the Forbidden Zone?

As can be seen in this clip from YouTube, it has some very saturated oranges.

If so, yours is a duplicate of this question.

As @iliveunderawesomerock mentioned, this could be "Terminal Virus", a low-budget made-for-TV movie from 1995.

As you can see from the screenshots, the film was set in a post-apocalyptic desert. There was extensive use of an orange filter (presumably to disguise the poor quality of the film-stock used) and a scene where one of the film's many large-breasted amazonian women strangles a man who's been hiding behind a vehicle. 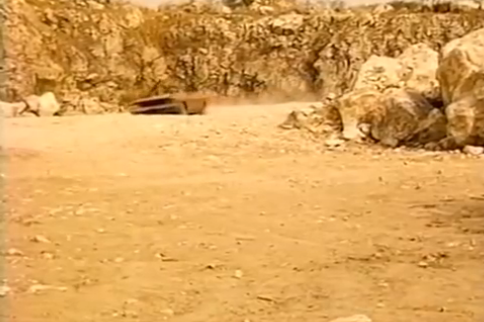 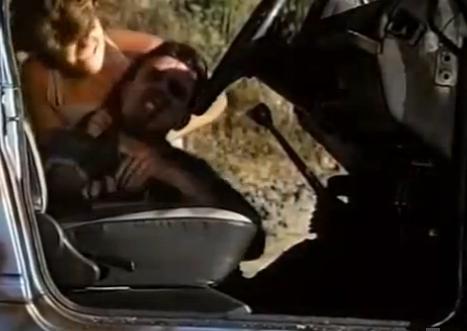 You can view the film (alas, with Russian dubbing) online here

The 1977 film Damnation Alley has some scenes with over-saturated oranges as well, as can be seen on YouTube.

It is based on a book by Roger Zelazny of the same title.

In the year 2037, an international sport has been established, wherein a driver of a truck must cross the country and arrive at a designated terminus, while confronting obstacles and enemies along the way. The lead truck, named "Monster", has been designed by a boy genius (Gabriel Damon) and is to be piloted through the course by a woman named Gus (Karen Allen). Eventually, the truck's AI fails and Gus ends up in uncharted territories. There, she encounters leather-clad "hoods" (hoodlums) that torture her and eventually kill her. Prior to dying, she befriends a fellow prisoner (Johnny Hallyday), who later uses the truck to rescue himself and a young orphan. Meanwhile, the boy genius watches them by an artificial satellite so that he may see how well the truck's software works. The conclusion reveals that as he watches the truck, he is himself watched and evaluated by the sinister doctor (Jürgen Prochnow) who cloned him.

The 1984 film Starship, also released as Lorca and the Outlaws, and 2084, does involve a fight over a giant truck in a desert landscape, although I feel like you would have mentioned the android.

This review specifically mentions the fight.

On returning, he is captured by Danny (Hugh Keays-Byrne: Mad Max, Les Patterson Saves the World, Farscape: The Peacekeeper Wars and the 1999 version of Journey to the Centre of the Earth), a grimacing, unkempt bounty hunter employed by Captain Jowitt (tick another cliché box, folks; heck, tick a bunch of them) who has already captured Grid and uses him as bait. The two rebels are thrown into the back of a giant truck with a single droid guard who is easily overcome. There follows a deeply unthrilling ‘fight’ between Lorca and Danny which ends with the truck rolling gently into a wall of earth with a small explosion to suggest that it has crashed in some way (they couldn’t actually damage the thing of course, on account of how much those trucks cost). Danny is thrown into the earthbank but we later see his hand emerge so he’s - gasp - not dead. Lorca repairs Grid, whose head has come off.

You can see some clips of the movie in this bit featuring the music of Genesis, who scored the film:

5
80's/90's movie: man and woman driving through a red desert planet
9
Post apocalypse movie from the 70s or 80s with a truck in it

7
70's or 80's movie with flying bikes over a desert
5
80's/90's movie: man and woman driving through a red desert planet
16
Movie identification: Movie with alien type insects fighting on desert type planet against marines
3
80's or maybe early 90's movie, nuclear wasteland, bunch of people in a truck driving through the desert
6
Movie played on Sci-Fi about people with blue or green blood
12
An animated sci-fi movie with a fully armoured antagonist and a pale looking child
13
80s sci-fi movie, man walking from a desert, gets to a road and stops an aerodynamic autonomous semi
5
Movie about space rangers fighting giant yellow bugs