Was the conception of Angel's baby ever explained?

Watching Angel, I have become curious if the mysterious conception of his child, Connor was ever explained (other than it being fortold, obviously)? 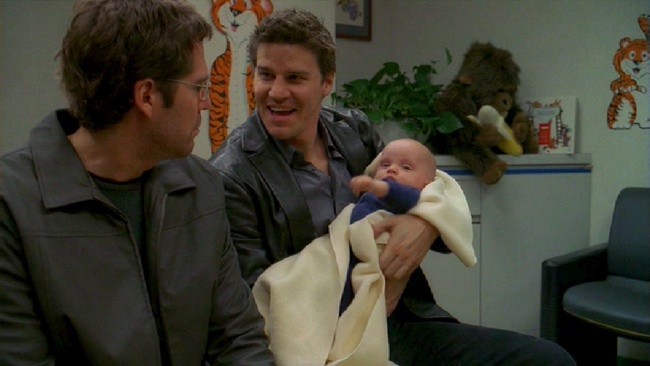 The end of season 4 explained it...Jasmine claimed to have arranged it. In order to enter into the world she needed a body fathered by someone like Connor. So she arranged for his conception, then manipulated Cordelia into ascending, then took over her body when she returned, then seduced Connor, and Jasmine then inhabited their baby.

I don't believe any other explanation was given in the series.

It was ...not the most convincing plotting the series ever did.

There are a number of theories, even in-universe, as no explanation was ever fully revealed.

However, a prominent and likely one is that Angel won it in The Trial.

Let's back up, though.

In the episode, Epiphany, Angel and Vampire-Darla have sex, in a plot to turn Angel back into Angelus with a moment of pure happiness.. (Un)fortunately, Angel doesn't love Darla, and remains as Angel.

Later, when Darla is dying, Angel undergoes a series of trials in order to save Darla's life. Even though Angel is successful at completing the trials, he is told that since Darla's life was already supernaturally saved, nothing more can be done for her.

While never explicitly stated, it is theorized that in lieu of saving Darla's life, a new one was granted - resulting in Darla's pregnancy.

46
In what order should Buffy and Angel be watched?
9
Why is Angel the only vampire to be forcibly re-ensouled?
22
Why are Slayers always women and not men?
20
What was Cordelia's original fate as intended by the writers?
3
How did Angel escape hell?
2
Why did Spike get brought back to the Angel series?
16
Why does having a soul make Angel non-evil compared to evil humans?
0
Do Buffyverse Vampire teeth have magical piercing properties?
4
Buffy the Vampire Slayer - was Angel killing when he had a soul?
3
Does Pardoning mean something different in Pylea?