What are the shiny circles on Thor's costume? 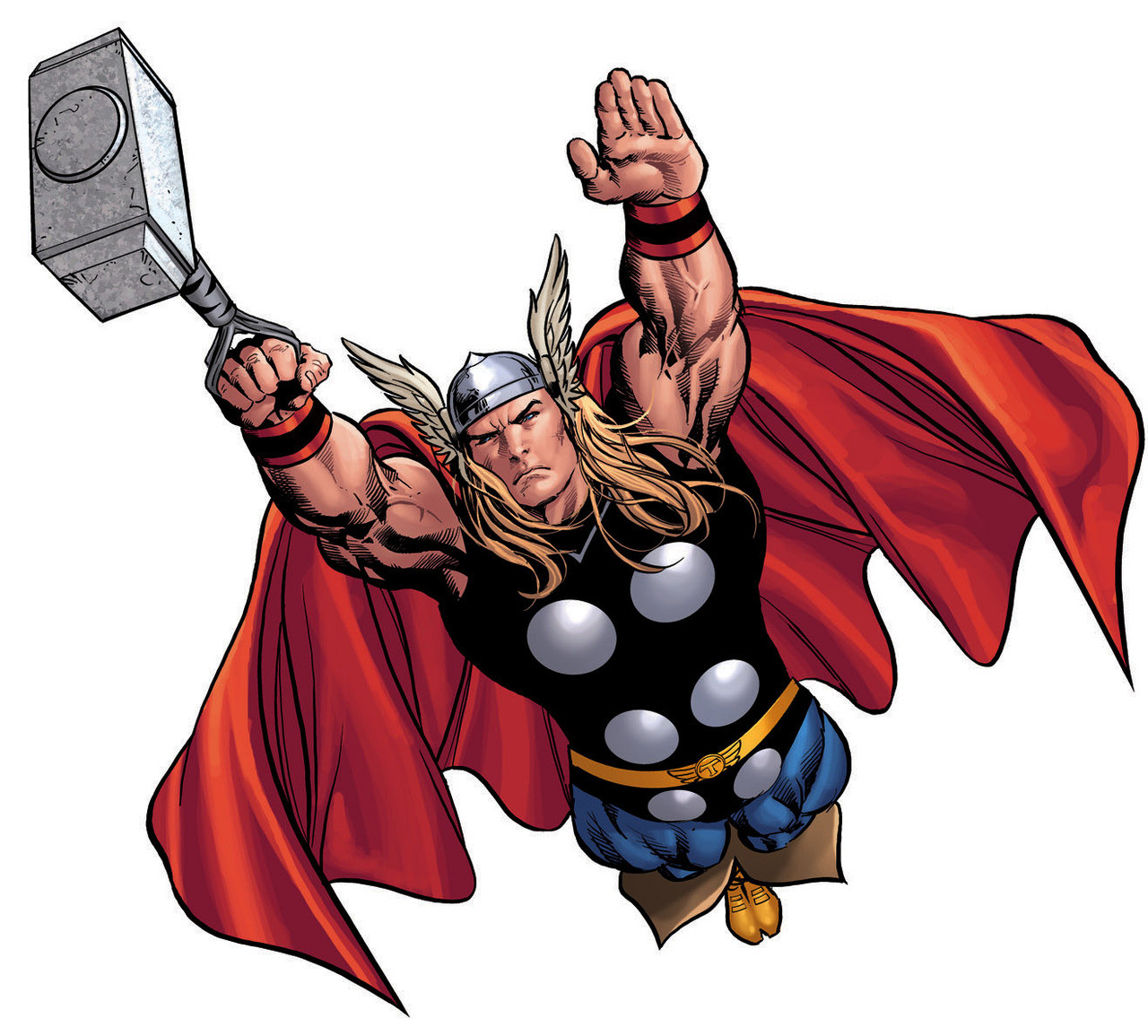 Anyone have any idea what they are or what they're for?

I'll take a Marvel Universe explanation or even a Norse mythology answer. Thank you!

This answer'slinks are mostly conjecture and fan theories. I have some canon material, but I lacked to find anything solid.

It appears if they are just for protection(theory), also on a lesser note they appear to keep his cape on(in some designs).

My theory that they were for protection and were also symbols of his honor and status is shown when Odin rips them off and tells him that he is not worthy of his friends and of his title.

Gotten from this source.

[Incensed about Thor and the Warriors Three's mission to Jotunheim, Odin brings them back to Asgard]

Thor: Why did you bring us back?

Odin: Do you realize what you've done? What you've started?

Thor: I was protecting my home.

Odin: You cannot even protect your friends! How can you hope to protect a kingdom? [speaking to Heimdall] Get him to a healing room! Now!

Thor: There won't be a kingdom to protect if you're afraid to act. The Jotuns must learn to fear me, just as they once feared you.

Odin: That's pride and vanity talking, not leadership. You've forgotten everything I taught you about a warrior's patience.

Thor: While you wait and be patient, The Nine Realms laugh at us. The old ways are done. You'd stand giving speeches while Asgard falls.

Odin: You are a vain, greedy, cruel boy!

Thor: And you are an old man and a fool!

Odin: Yes. I was a fool to think you were ready.

Odin: [to Loki] HEY! [to Thor] Thor Odinson, you have betrayed the express command of your king. Through your arrogance and stupidity, you have opened these peaceful realms and innocent lives to the horror and desolation of war! You are unworthy of these realms! You're unworthy of your TITLE! YOU'RE UNWORTHY!.. of the loved ones you have betrayed. I now take from you your power! In the name of my father and his father before, I, Odin Allfather, CAST YOU OUT! [banishes Thor to Earth] Whosoever holds this hammer, if he be worthy, shall possess the power of Thor. [throws Mjolnir to Earth]

I do not put much into the theory that they are for protection as Thor has his belt and hammer for protection. Also, if I remember correctly the disks have things hit it and are reflected or the lessen the impact, so they might have some protective qualities.

This is a forum that explains that, but it is fan talk(so beware).

Thor's armor was an amalgamation of the versions seen in both the original Marvel and the "Ultimate Marvel" comics.

As you probably saw in the Thor movie, Odin rips them off of Thor when he is banished to Earth and his armor disintegrates. The six of them compromise Thor's hauberk, a highly complex biological weave made of some kind of durable nanocarbon. In addition to its physical hardness, the armor indirectly protects Thor from ballistics, extreme heat and cold, cutting weapons, energy weapons, psychic attacks, vacuum, and it also protects against a few things that are hard to describe (due to Earth's primitive level of technology).

This is why Thor doesn't usually bother with a helmet, his armor is advanced enough that even his face is protect even though it's not covered. Anyways, the point is that the discs are the major component of his armor. Most of the rest of his armor (and a fair amount of Thor's combat toughness) is generated by the discs.

This is why Yasgardians prefer melee weapons. Their defensive technology is so good that range is almost immaterial in combat. Bear in mind, Yasgardians are just sufficiently advanced aliens. Their technology may look like medieval armor and weaponry, but it only looks like that because Yasgardians like the aesthetics.

The primary example of this is Thor's hammer, a simple-looking weapon that can demolish buildings, call lightning, and exert enough force to pin a medium-angry Hulk to the floor.

Note: Most of this is speculation taken from SHIELD's data vault and compiled into the official report given to Congress on extraterrestrial threat assessment. The description is vague because Thor has to follow strict Yasgardian policies regarding civilizations which are less technologically-advanced. And even if he wanted to share his technology he would have a hard time explaining it because Thor is a warrior, not an engineer.

If you believe them.

This talks about the mythology that the movie got wrong.

This talks about aspects of the movie and Thor's powers.

You can read all about it at the above link, but basically, a team in Brussels was trying to create their own super soldier, using symbols from Norse mythology to create a suit that gave its wearer the ability to fly and super-strength. 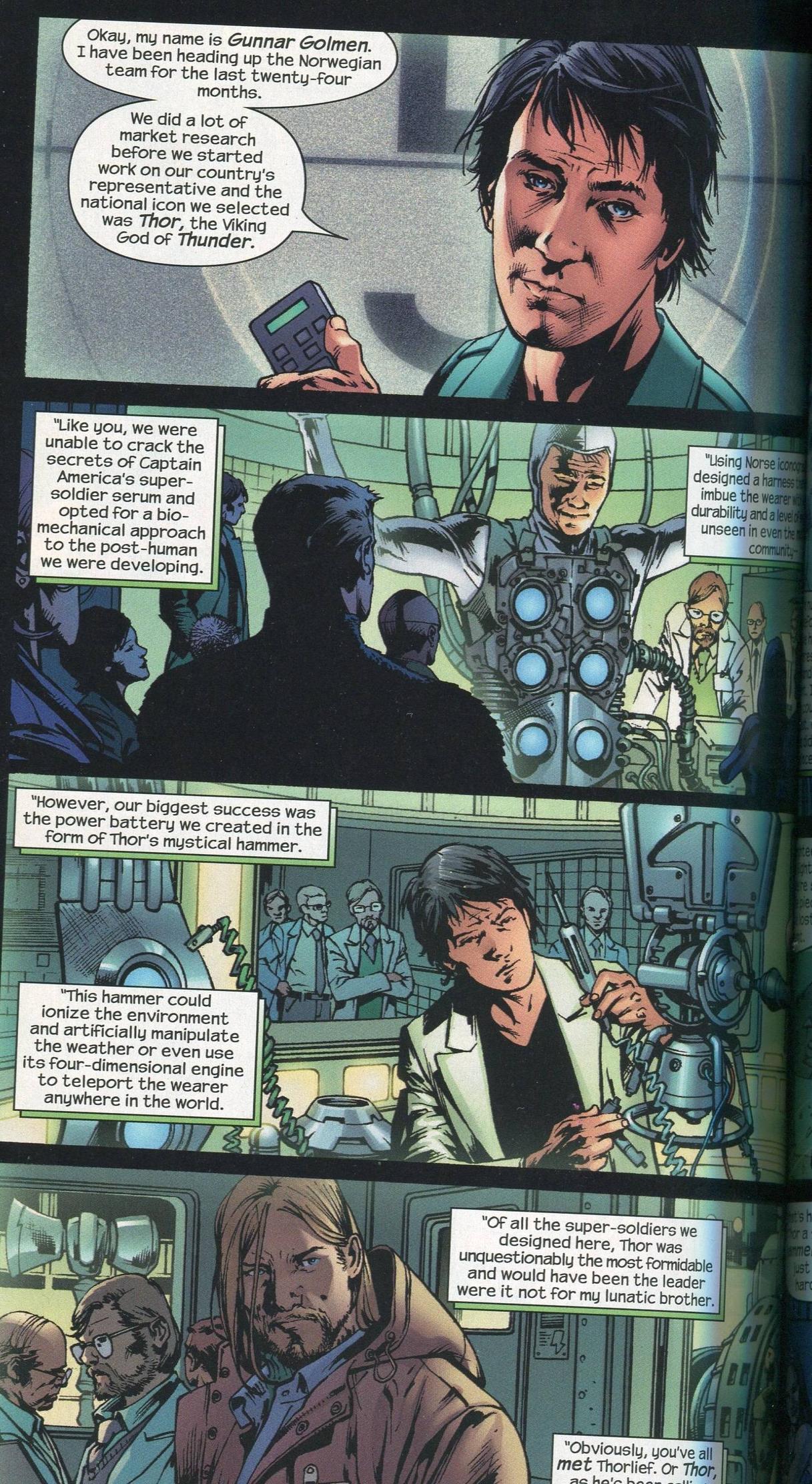 One of the team members, Thorlief Golmen, had a mental breakdown and started to believe that he was Thor, the Norse god of Thunder. The team actually incorporated some of his ideas into the suit, adding things like weather control to its repertoire.

This answers your question: the circles were part of the suit, which gave its wearer Thor's powers.

Thorlief eventually escaped with the suit and became Thor. Loki, having infiltrated the team from Brussels, later convinced The Ultimates that Thor was just an escaped mental patient. They do manage to get the suit (the belt part of it) away from Thor, and he seemingly loses his powers, giving credence to the claim.

Perun, aka "Soviet Thor" at this point wears Thor's belt and circle-vest, which give him Thor's powers.

Thorlief then learns that he is indeed Thor, reborn in a human form. He then gets Thor's true powers and no longer requires the suit, or the circles.

And for more background on Ultimate Thor's use of his suit versus his god powers, wikipedia is always a good start.

The shiny circles on his shirt serve no clear purpose, even they are not a clear symbol like the Superman's "S" because there already a "T" symbol on Thor's belt.

The circles provide a nice disruption of the monotony and their shiny nature contrasts well with the black of Thor's tunic and the six circles are arranged in perfect symmetry and its served as the perfect look for an Asgardian God of Thunder.

There is little historical references in Marvel canon for the circles on Thor's chest tunic. He has had this costume since his first appearance in Journey into Mystery #83 (1952). 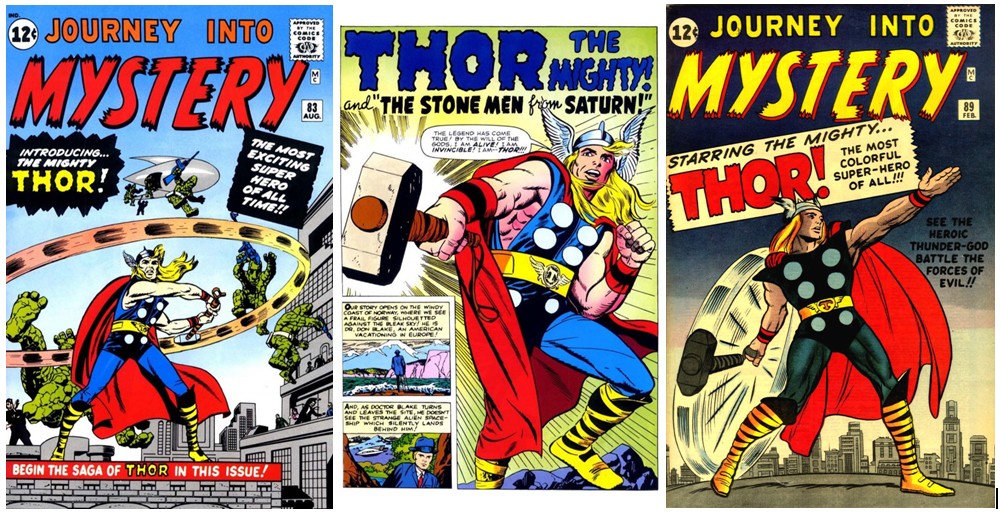 Can history be our guide?

With that said, we can look perhaps into history and see if we can determine what the artist Jack Kirby was hoping to show in this costume design. If we can assume this design was inspired by Thor being an ancient god of war, then perhaps it would be considered a stylized armor design. Thor being a superhuman being might have little use for armor in his day to day life, but might want to remind his enemies of his valor with a costume that could resemble an armor he may have worn at one time. 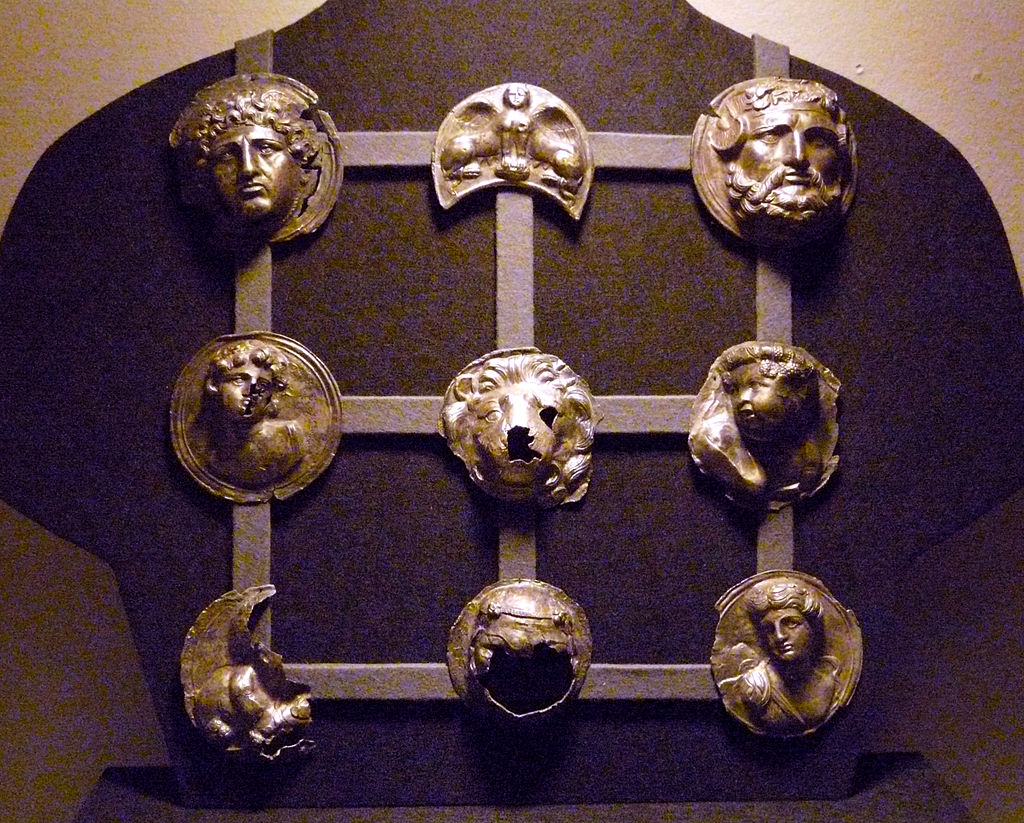 One of the first and earliest potential armor designs which bears more than a passing resemblance would be the 120 AD, Legionary Roman armor. The phalerae medallions, the large disks share a similar placement (though not exact) on the Roman armor. The disk were usually covered with the faces of prominent leaders or mythical beasts denoting bravery or skill in battle.

From the Augustan period, both infantrymen and cavalry men received the same award when an opponent was killed and his equipment seized: a series of nine phalerae which gravestone reliefs show were worn on leather straps on the upper torso. Once again, these decorations were intended for soldiers up to the rank of centurions. --Armed Batavarians: Use and Significance of Weaponry and Horse Gear, by Johan Nicolay; Amsterdam University Press. 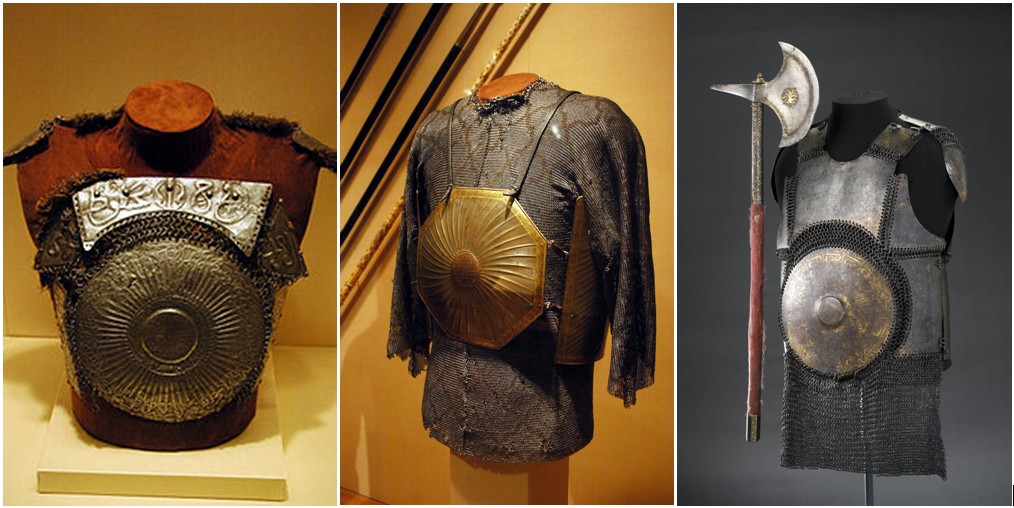 The phalerae medallions were not unique to the Romans. The Celts wore similar devices for religious reasons and similarities could be found in ancient Mongolian, Chinese, Russian, Ottoman and Japanese armors, often designated mirror armors for their shiny appearance.

Thor has had many different costume designs, many actually resembling armor rather than the cloth or leather of his early designs. These later designs were more inclined to use actual armor plates to depict the circles in his early costume designs, strengthening the appearance to phalerae medallions, even including ornate designs in some of them.

While we have no definitive proof the circles on Thor's early costume were indeed a representation of phalerae medallions, it is at least historically possible the original design may have been inspired by early armors from the Roman, Ottoman and Persian armor designs which incorporated similar elements.

Note: While Vikings did wear armor into battle, it has not been shown to be an integral part of the armor designs to wear phaelara into battle. Most vikings wore leather furs, cuirboilli (boiled hardened leather) or chainmail tunics with shields into battle. 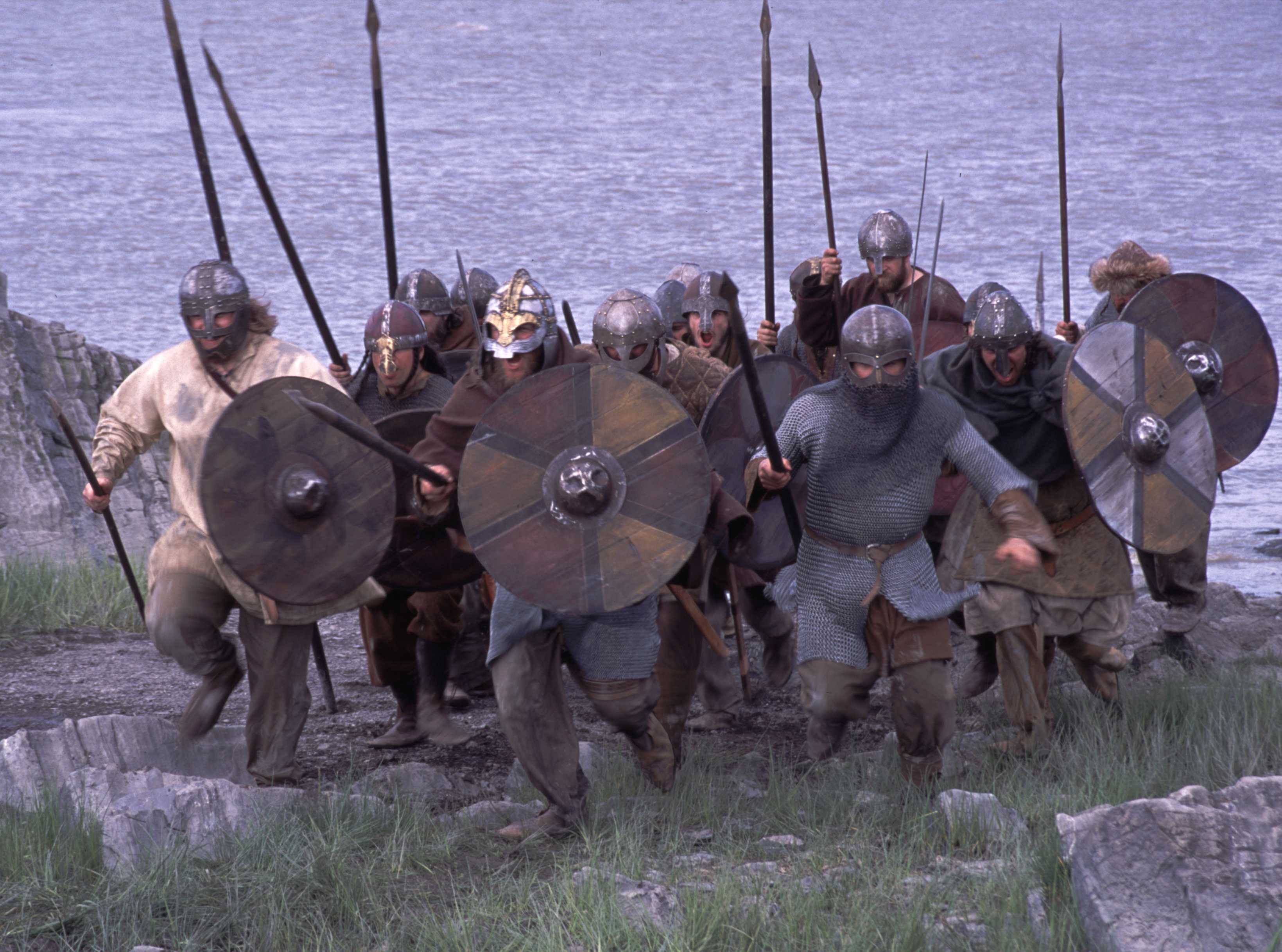 A fairly realistic depiction of Viking armor and weapons circa the 5th century AD.

Not the answer you're looking for? Browse other questions tagged marvel thor-marvel super-hero or ask your own question.

14
In Marvel Comics, why did the Asgardians cut off contact with Midgard (i.e. Earth)?
6
In “Fear Itself,” did Matt Fraction base his additions to the Thor-canon on actual Norse mythology?
40
How much of Thor's power could Rogue steal?
14
How could Thor's hammer Mjölnir be forged in the heart of a dying star?
8
Why are the Frost Giants in 'Thor' so short?
3
What is the in universe relationship between the Asgardians and Nordic cultures?
3
How do Marvel universes have “standardized” numbers?