Any reference from Harry Potter books, movies or canons that all the pureblood Slytherin family tree is tracked back to Salazar Slytherin?

In the family tree drawing of Sirius Black's house (12 Grimmauld Place) it's been mentioned that most of the Slytherin families are inter-related with each other.

harry-potter slytherin genealogy
Share
Improve this question
edited May 27 '17 at 17:32

There is no way to know this as I can't find anything saying this straight forwardly, but since intermarrying occurs then people are going to be related. I know that Dumbledore said in The Chamber of Secrets that Voldemort is the last descendant of Slytherin, but in defense of my statement, I think he meant that Voldemort is the last one to be directly from the Slytherin bloodline, as Harry is related to Voldemort and therefore related to Slytherin, but in a roundabout way.

"You can speak Parseltongue, Harry," said Dumbledore calmly, "because Lord Voldemort – who is the last remaining descendant of Salazar Slytherin – can speak Parseltongue. Unless I'm much mistaken, he transferred some of his own powers to you the night he gave you that scar. Not something he intended to do, I'm sure…"

I would hazard to say no, the Slytherin lineage can not be traced back to Salazar Slytherin through canon alone. I would say that it is possible through mostly canon material, though, to trace back some of their lineages.

We know the Gaunts are related to him for sure, and since many pure-blood families intermarry, then that would also indicate that they too would be related to him. But since the whole of the wizard community that cares about "magiciness" or being pureblood intermarry within anyone that would mean that most of the wizards from any house have not only Slytherin blood but also some other blood (like Hufflepuff or the Peverell's). Thus, while not proven it is obvious that a lot of the wizards in Slytherin are probably very distinctly related to Salazar Slytherin.

On another note we can see from the Harry Potter and the Voldemort situation that anybody can be related to anybody, as wizards interbreed.

Yes, they are very distantly related through the Peverell Bloodline, this is revealed in Deathly Hallows. Marvolo boasts about being descended from the Peverells, which is why he has the ring (which turns out to be the resurrection stone). Harry then discovers that the reason he has the invisibility cloak is because he is descended from the brother who owned the cloak, Ignotus Peverell, which means Harry and Voldemort are distantly related. However, most people don't generally consider people to be related after so many generations have passed.

"The pure-blood families are all interrelated. If you’re only going to let your sons and daughters marry pure-bloods your choice is very limited; there are hardly any of us left." —Sirius Black

Harry and Voldemort are related through the Peverells, this was talked about in Deathly Hallows. Also, it depends on how you see that people were created or otherwise, but are technically distinctly related.

Possibly the reason you mistook all Slytherins for being related to Slytherin is because they are chosen by the sorting hat. But the sorting hat doesn't just choose based on of blood, it chooses based on your qualities and what you say to him (at least in Harry's case).

The Sorting Hat on Pottermore uses a set of question to determine the house of a user. The questions vary in style and do not necessarily have four answers (one for each house). There are 27 questions in all, and each user can be asked a maximum of 7, or 8 if the hat cannot decide between houses and asks your opinion. Generally, a set of a few questions can be given to a user for each question, there are, of course, occasional exceptions to the order.

Also, from non-canon sources there are these pictures. If you search for "Slytherin family tree" you get a lot results. 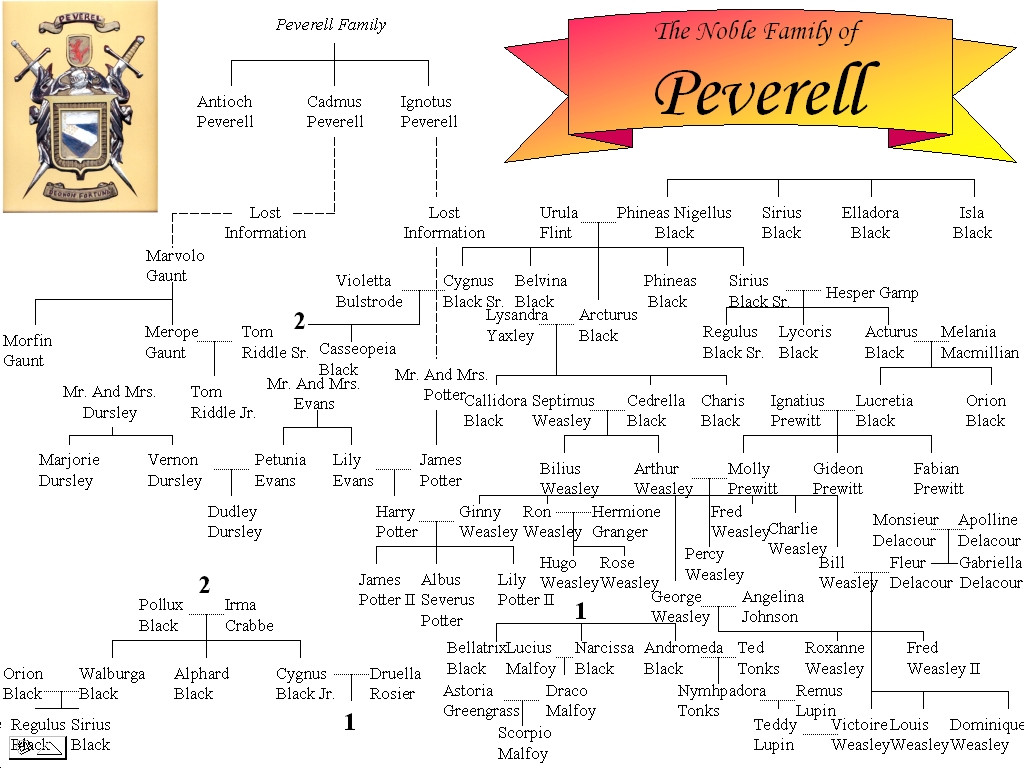 I think it was stated in the second book that Tom Riddle was the only living direct descendant of Salazar.

Quote from "Harry Potter and the Chamber of Secrets" :

"You can speak Parseltongue, Harry," said Dumbledore calmly, "because Lord Voldemort – who is the last remaining descendant of Salazar Slytherin – can speak Parseltongue. Unless I'm much mistaken, he transferred some of his own powers to you the night he gave you that scar. Not something he intended to do, I'm sure…"

Not the answer you're looking for? Browse other questions tagged harry-potter slytherin genealogy or ask your own question.

23
What constitutes a “Dark Wizard?”
9
In the Harry Potter universe is there any mention of just how many Pure blood families there are?
18
Why did Sirius Black's family live among Muggles?
14
Reference for the first name of Sirius Black's mother, known from her portrait: Walburga
24
Did Sirius' family assume he was a Death Eater and like him post-arrest?
17
Are Harry Potter and Ginny Weasley Distant Relatives?
20
What was Helga Hufflepuff’s animal ‘avatar’?
9
Are Draco and Harry related?
4
What is the definition of “pure-blood”?
1
Are pure-bloods actually a distinct species from Muggles?