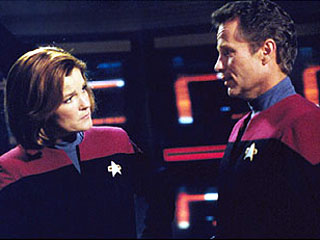 41
Why didn't Seven of Nine assimilate the Voyager crew when she was separated from the collective?
90
Was Voyager really significantly slower than the Enterprise-D?
12
Why does Janeway go on so many away missions?
6
What of the time loop in Voyager episode, "Coda"?
23
Were the Maquis who returned on Voyager punished for having been Maquis?
5
Why didn't Tuvok tell Janeway that R'Mor would die before giving him the messages?
10
Why did Chakotay agree to have the Maquis serve as a Starfleet crew?
12
When was the earliest opportunity the Voyager crew had to return to the Alpha quadrant after being stranded?
2
Why didn't the Voyager crew take the shortcut in Prime Factors, abandoning the ship?
5
What new technology did Voyager bring home?