Is Middle Earth supposed to be a pre-historic England?

I understand that Arda is supposed to be set somewhere in a sort of vaguely ancient Earth, but does that mean that Middle Earth is supposed to take place in the area that eventually becomes modern-day England? I read that J.R.R Tolkien wrote LOTR because he wanted to create a mythology for the English, as they didn't really have one before.

See this page--presumably the shape of the continents was meant to be fairly different back then since the coast in Tolkien's maps (not drawn directly by him, but in some cases with guidance from him and authorized by him, see here for details) doesn't look like the coast of modern Europe, but Tolkien does say that "the action of the story takes place in the North-West of ‘Middle-earth’, equivalent in latitude to the coastlands of Europe", and he also says that Hobbiton is "about the latitude of Oxford". Someone has made a detailed attempt to assign latitudes and longitudes to places in Middle Earth (using various clues from Tolkien's writings), and use this assignment to superimpose Middle Earth on modern-day Europe, on this page: 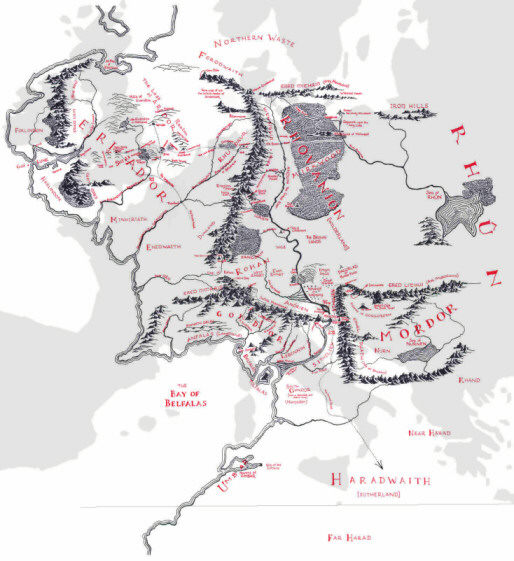 JRRT actually wrote the original Lost Tales as a supposed "Mythology for England" but that concept was abandoned before Lord of the Rings was published. The Hobbit was originally an independent work that used elements of the older stories to provide "flavour", and Lord of the Rings grew out of a sequel to the Hobbit which was in it's own turn drawn back to the older stories.

Much of this is described in Letter 131:

I had a mind to make a body of more or less connected legend, ranging from the large and cosmogonic, to the level of romantic fairy-story-the larger founded on the lesser in contact with the earth, the lesser drawing splendour from the vast backcloths – which I could dedicate simply to: to England...

The Hobbit, which has much more essential life in it, was quite independently conceived: I did not know as I began it that it belonged.

At the time when he wrote the Quenta Noldorinwa, published in History of Middle-earth 4 and roughly contemporaneous with his writing of the Hobbit, the concept was that the British Isles were leftovers from the destruction of Beleriand in the War of Wrath, as Christopher Tolkien notes in his commentary:

...it seems plain from the conclusion of Q that England was one of the great isles that remained after the destruction of Beleriand...

Of course, the stories of the Second and Third Ages didn't exist at that time (although the Fall of Numenor was shortly to be written), so this idea - in serious disharmony with the geography of Lord of the Rings - is not the contradiction it may seem to be at first.

As the mythology developed JRRT abandoned this idea, and came to view north-western Middle-earth as being a pre-historic, (possibly pre-Ice-Age) Europe, as is well-documented elsewhere, e.g on this site.

I recall hearing or reading, once, that Tolkien considered Middle Earth to be a real place (i.e., England) at a fictional time, which always struck me as an interesting concept.  I seem to recall getting this from an authoritative source, but I can’t find it now.  But my recollection is supported by this scifi.SE answer:

Bear in mind that Tolkien was a Roman Catholic and this strongly influenced his conception of Middle Earth, which he considered to be a fictional time and place in our world, and not a fantasy world set apart from it.

Tolkien himself was known to say that the world in which his imaginings occurred was a version of our own world in a fictional time.

(Although, that one does go on, in the very next sentence, to say,

While he claimed that the events of The Hobbit and The Lord of the Rings were supposed to take place about 6000 years before his own time, he was also clear that the geography and history did not quite match up with reality.

This page goes on to say “… Mordor [would be] around somewhere in the vicinity of Asia Minor.”, suggesting that Middle Earth is Eurasia and The Shire is England.)

I am convinced of the fact that Middle Earth matches the modern day British Isles. Evidence for this assumption can be found in the map of Middle Earth.

For example: compare the West coast of Eriador to the West coast of modern day Ireland. Follow the lines of the South coast of Ireland, Southwest England and Wales and you will notice that there is a match with the coastlines of Anfalas, Belfalas, Tolfalas and Harondor.

Even the names Eriador and Khand and the way they are pronounced suggest that there is a connection with Ireland and Kent. In this case the Misty Mountains are equivalent to the east coast of Ireland, and Ered Mithrim is equivalent to the southern Scottish Highlands.

Mordor has to be located in the Midlands and East Anglia. (Interesting to know that these regions have, since the time of the Industrial Revolution, also known as the Black Land, since it was the heart of England's industrialization.)

This means that Minas Tirith is Birmingham and the Ered Nimrais is somewhere between Dublin and Birmingham, dividing Wales into a northern and southern part.

Although Tolkien eventually dropped any "English connection" in his myths, he never dropped the idea that all those events took place on Earth.

The Shire is specifically modelled on English countryside, and Gondor is somewhere in Italy.

Of course, to Tolkien's own admission, all the lands got changed since then, so the Middle-Earth map doesn't look like modern Europe.

51
In what time period does The Lord of the Rings take place in the real world?
73
Is Tolkien's Middle-earth in our Universe?
22
How exactly is Arda supposed to be an ancient Earth?
24
Why was Melkor aka Morgoth created without a female counterpart?
3
Source for info on Middle-Earth's 'Real World' Geographic counterpart

14
Are the Middle-earth languages spoken in the LOTR/Hobbit films faithfully pronounced from the texts written by Tolkien?
11
Sailing West from Middle Earth as a Human
7
Do I need to learn reading Runes to fully understand Tolkien's Middle-Earth series?
34
How much of the Middle Earth universe had Tolkien invented when he wrote The Hobbit?
15
How did non-native plants find their way to Middle-earth?
16
Is there a way to determine the respective canonical status of Tolkien's Middle-earth related works?
6
Did Tolkien abandon his goal to make an English mythology?