Teens stranded in eco-system within alien ship, fighting for survival

Looking for the name of a book series I read in middle school, 2001-2004 roughly. All I can remember about it was that there were a handful of teenagers who somehow ended up on an alien planet that they eventually found out to be a ship. They have to fight for survival against multiple different enemies, I think one of the kids could communicate with part of the ship telepathically. Some of the aliens were either blue or I think even transparent. There really isn't too much to work off of, but I figured someone might know what it is.

Since I don't think Katie is coming back, she realized (and posted in her question) that the series was Remnants by K.A. Applegate. 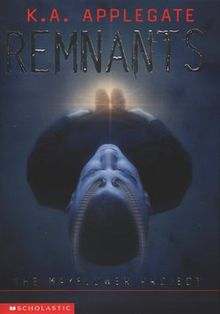 From the Wikipedia summary of the series:

It is the story of what happens to the survivors of a desperate mission to save a handful of human beings after an asteroid collides with the Earth. Eighty people are placed aboard a converted space shuttle using untested "quack" hibernation technology and fired blindly into space hours before all life on Earth is obliterated by a large asteroid called The Rock. They are then picked up by a large, sentient space craft of monumental proportions known as 'Mother' which is inhabited by various races. 'Mother' can manipulate the physical environment within the craft's limits and often does so. Only a few people placed in stasis actually were alive and capable of being reanimated when they reached 'Mother'.

Not the answer you're looking for? Browse other questions tagged story-identification aliens spaceship young-adult or ask your own question.

6
Novel where a meteor is about to destroy earth?
7
Space horror book series. Cryo-sleep spaceship escapes dying Earth but is captured en-route
6
Looking for a YA book series about teenagers who are the only ones to survive hypersleep
5
What is this young adult book series?
3
Young adult series, cryosleep, crashed spaceship. People were turned to “swiss cheese” by worms
4
YA book series kids on a spaceship called “Mother”
4
Help me find a story from my childhood: Deep Space Cryosleep (End of the World)
5
2000s (or earlier) sci-fi novel beginning with a boy who loses his skin
3
Scifi novel where a boy named Jobs is sent into space in a spaceship to avoid an asteroid

8
looking for early 2000's sci fi youth fiction set in future, kids have mental powers that let them simulate war
4
Looking for a childrens/young adult book about children exploring the dark side of a moon
7
Animated movie about a card game that came to life
6
Middle grade novel about two kids in an underwater city, one coming from the surface; they get involved with a gang
8
Obscure fantasy book, late 70s or early 80s, main characters are hobbit-like and can communicate with wolves