I was watching "The Secret Garden" film yesterday and it made me remember a TV fantasy drama I watched when I was young.

I would have watched this mid 80's but the program could have been a repeat. I can barely remember what it was about but it definitely had a group of children and teenagers. One very prominent feature was that it was based in the 19th Century, based from the clothing. I remember asking my mum why the boys had long hair (one was brown and wavy). The children may have all been related family I think possibly cousins. The program was also set in the grounds of a manor mainly and they played near / in a building (or could be pavilion).

Now I am not ruling out this was some adaptation of the secret garden but it wasn't the one I watched I think I would recognize the child actors if a picture of them is found (and I think that is the best way to identify). Of course I may be mixing up details here. One other point is I most likely watched it on CBBC I remember a lot of dramas been on at the time.

It's not 19th century, but The Children of Green Knowe might be what you're looking for. All I really remember about this show was that a statue of St Christopher came to life and waded through a river, and it really creeped me out (I must have been all of six at the time).

It was broadcast in the run up to Christmas 1986 and has boys with long hair: 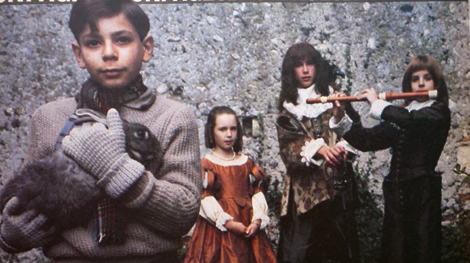 It was set around a mansion in the 20th century and featured ghosts, who were all from the same family line, and spirits.

There was an adaptation of The Secret Garden filmed and broadcast in 1975 on BBC television. As you can see from the image below, the main boy character had long(ish) wavy brown hair. 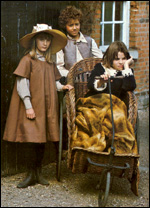 5
What 80s BBC kids’ TV show had children fitting together machinery they found in the countryside?
3
sci-fi series from early or mid 90's
5
Looking for title and author of children's science fiction book series and tv show
4
Book Series for MG/Children - About Kind/Gentle Alien Professor/Engineer Working in Basement Laboratory
10
Non-spooky ghost book where a boy sees ghost children in the garden and is told the stories of them
8
Children's ghost story in 1980s whose character names started A, B, C
9
Drama series with long/eternal life through child possession/reincarnation
4
Animated children's show from the early 2000's - drink turns you into an alien