Fantasy book - Evil Prince forces a Mage to use Black Magic; Mage is slowly dying from it Book cover background of a castle

I'm looking for a book from my youth I wish to share.

One of the main characters is forced by a snotty prince to use black magic. Black magic in this world is banned from use. The mage(wizard) cries(sulks) and is a sorry lot of a lad. Using black magic makes his body fall apart. On his skin he gets boils he has to hide(or people many think he is a black mage). He knows he will die early from its use. But its death if the general public find out he is practitioner of the dark arts. Also the Prince blackmails him at this point so he can't stop. I believe the Prince is using him to take the throne from his Father, brother? I forget from who.

There is a Coliseum of the gods each part of of coliseum is dedicated to a different God. But the Dark lord (god/goddess) is banned so doesn't have a place to worship that god.

But the mage needs to do a ritual of some sort at the altar. He ends up finding a black spot on the floor and thats the place he needed. ( I believe the moon(s?) was involved. or under the star constellation that exemplifies the dark god? )

I also have am image of my mind that the book cover had a castle on it. I reminder thinking that the cover looked retarded(in my 11-12 year old mind) but my mother said it was getting good reviews.(I could be wrong on this information within this paragraph).

Around this time frame I read The Death Gate Cycle books.

I think it's the Well of Darkess too, although the version I read had a different cover.

Well of Darkness is the first book in the Sovereign Stone series, written right after the Death Gate Cycle. It features a priest / mage who is blackmailed by Prince Dagnarus, the second son of the human king.

Each major race is associated with an elemental power - humans were earth; elves, orks and dwarves has their own element. The human king had been given the Sovereign Stone by the gods to create paladin-style knights.

The evil prince discovers the space between elements, the Void, has a power of it's own and can be used to create death knights. He forces the mage to switch focus from elementalism to the void, causing his own flesh to corrupt.

Jealous of his older brother, he wants to get rid of anyone in the way of him taking the throne.

They discover a fifth race, the Taarn, dedicate to the power of the void and use them to make war on the other races. 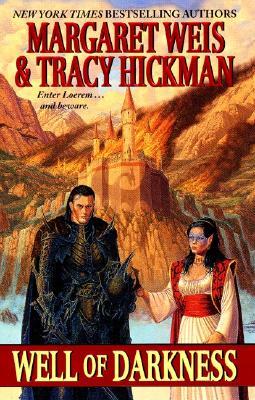 8
70s Young Adult science fiction short story collection available in schools
8
Fantasy book where a young prince becomes a mage
7
Fantasy series about twin boys from the 80's. One is stolen at birth by evil forces
3
Fantasy Book; Rapunzel-like Tower on Cover; Green in pallete; Mage; Short book; 70s-80s
12
Medieval fantasy book where an evil sorcerer tried to use magic to make the new weapon, a cannon, explode
6
Fantasy book about a rock band saving the world from evil