How does Shazam tell people his name?

Shazam turns into a superhero and back by saying his name. So how does he introduce himself?

As you see from the panel below from the Curse of Shazam, he's perfectly capable of introducing himself without transforming: 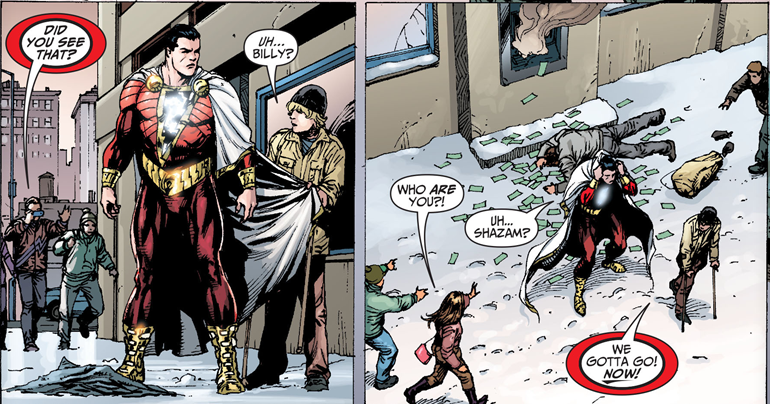 In short, he introduces himself by saying "Hello, I'm Shazam"

Saying Shazam! only matters when William Batson has focused his will and intent behind it. At any other time it's just a word.

In the New52 version of Shazam, we are introduced to the Justice League (Justice League #00, 2012) with the retelling of the origins of the Big Red Cheese. When Billy Batson appears in the tower of the Rock of Eternity, the last of the wizards awaits him. 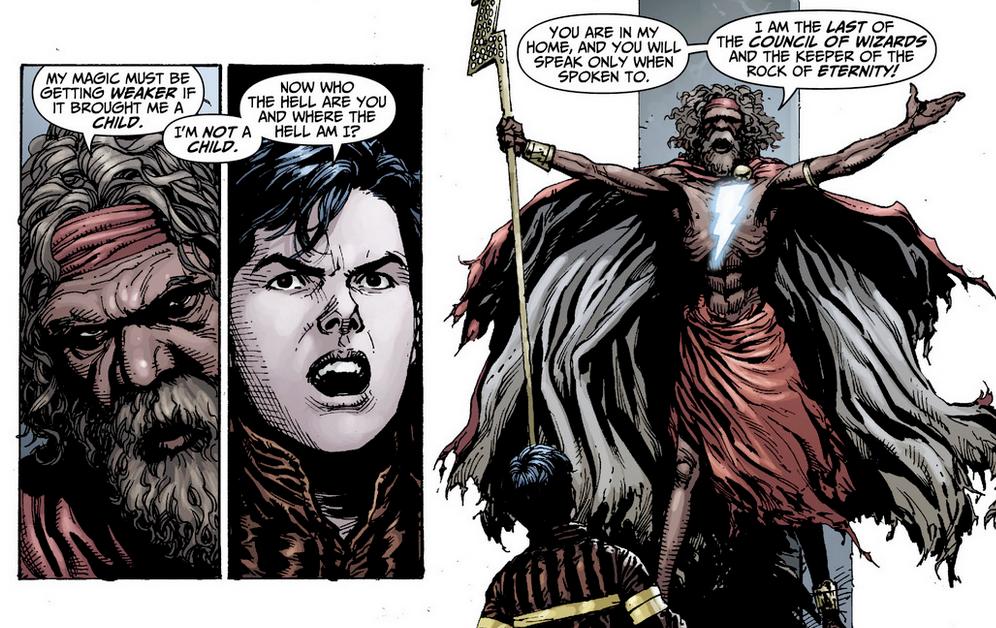 The wizard admonishes him when nothing happens. 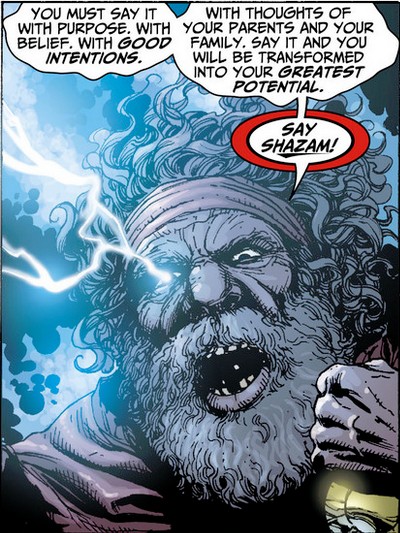 This time, when Batson says it with intent: 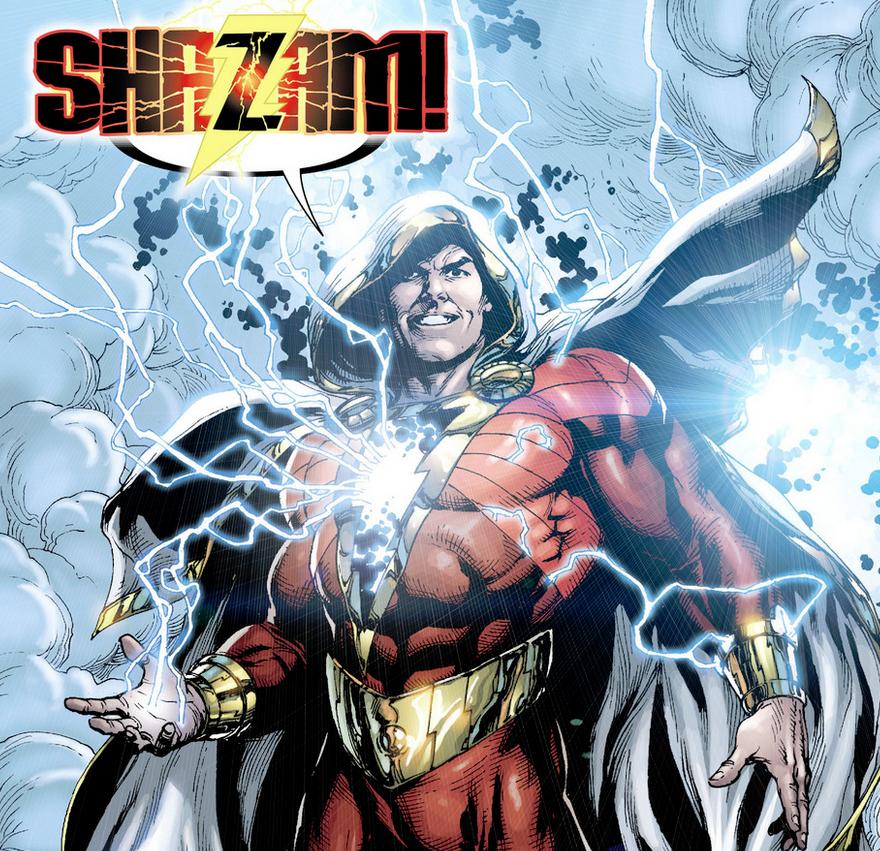 In previous continuities, it was possible for Batson (or any of his partners) to say their "magic word" by accident and be transformed or at least trigger the lightning. Likely this effect was played for humor in the early decades of the character's existence.

The movie reintroduces the problem Shazam has when introducing himself. During the scene where he explains himself to Darla, he mentions how the wizard made him say "Shazam". As soon as he said it, he transformed, and it was clear from the scene that he didn't mean to transform.

It was a problem that Captain Marvel Jr. had as HE transformed by saying "Captain Marvel". However, it appears that, as of Shazam! #1 (January 2019), Shazam has the same problem.

SHAZAM: You're going to have to guess. I've been having a bit of trouble saying my name recently. 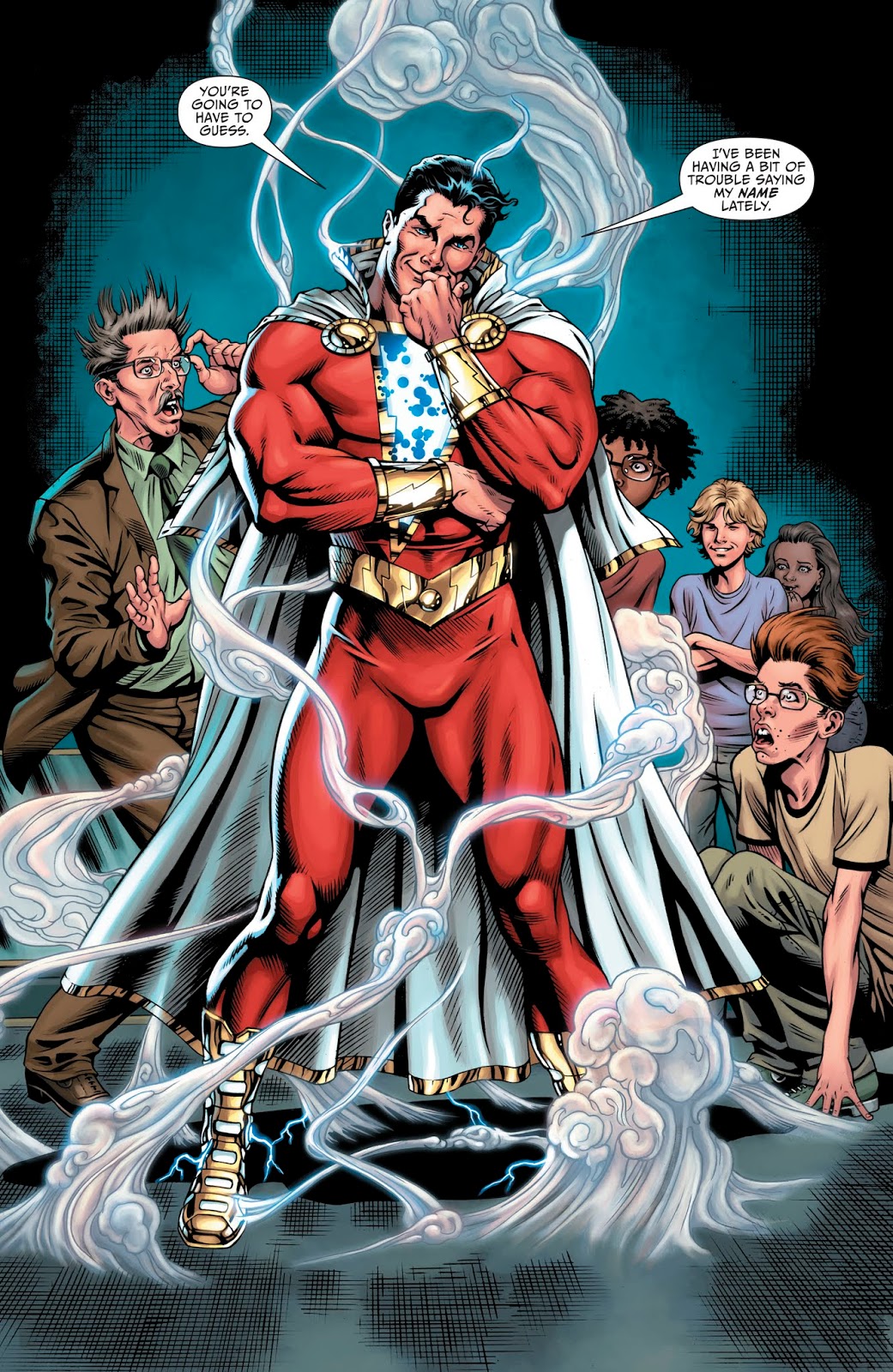 As you can see from the picture, Billy is saying that he no longer has control of the lightning when he says the Word.

The characters of the name SHAZAM! all represent a powerful champion, even the exclamation point.  "It took the combined might of Solomon, Hercules, Atlas, Zeus, Achilles, Mercury and ! to stop and contain Mister Mind." Shazam, current run, issue 2 tells us there was another champion, represented by "!" that is part of Billy's transformation. Therefore, the exclamation point is part of the name, and if only "Shazam" and not "Shazam!" is spoken, the transformation is not triggered.

16
What happens when adult Billy Batson says "Shazam"?
4
Can Shazam be transformed by someone else recording him and then playing it back?

23
How does Oliver Queen fund his "extra-curricular activities"?
16
Can Shazam/Captain Marvel's transformation be prevented by a roof?
4
Can Shazam be transformed by someone else recording him and then playing it back?
6
Does the transformation into Shazam help heal Billy's injuries?
16
What happens when adult Billy Batson says "Shazam"?
10
If he has the Wisdom of Solomon, why does Shazam make so many foolish mistakes in the 2019 film?
9
Were any elements from the Shazam! television series later integrated into the comics?
16
Can Shazam undress himself?
2
Did Andrea Thomas become Isis or just gain her powers?