Who is the child who gives a scorpion to Daenerys?

Is there any connection between the girl who gives a scorpion to Daenerys and Pyat Pree? Did Pyat Pree order the girl to do it? Because I thought Pyat Pree was already dead when the dragons burned him.

Yes, the young girl is a warlock, as she has blue-stained lips and uses magic to escape. Presumably she was sent by other warlocks of the House of the Undying to assassinate Dany for killing Pyat Pree: 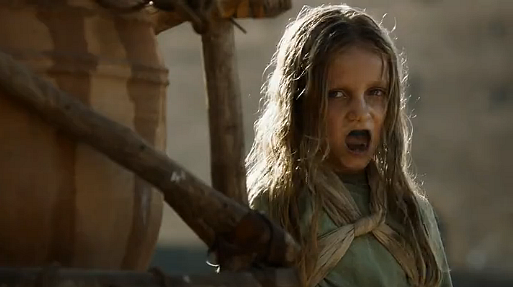 In the books the assassination attempt plays out slightly different. The warlocks want revenge on Dany for

burning down their House of the Undying. So they hire one of the Sorrowful Men to assassinate her.

Dany recalls in Chapter 8 of ASOS:

Back in Qarth, the warlock Pyat Pree had sent a Sorrowful Man after her to avenge the Undying she'd burned in their House of Dust. Warlocks never forgot a wrong, it was said, and the Sorrowful Men never failed to kill.

The child is an Unidentified Warlock, most likely a surviving member of the Warlocks of Qarth. Note that her lips only go the blue shade once her assassination attempt has failed and she escapes. 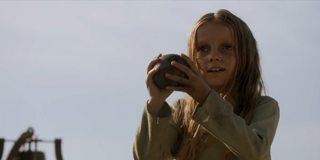 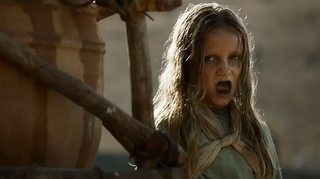 Compare the colour of her lips to those of Pyat Pree and you can see they are pretty much the same. 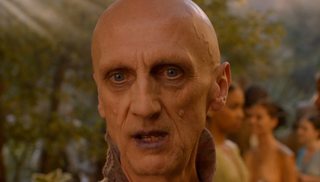 As for if there's any connection, well the warlock is probably from the same group as Pyat Pree. Though he is already dead, having dies in Season 2 Episode 10, "Valar Morghulis". They probably wanted to get revenge on Dany. After Barristan Selmy saves Dany from the Manticore she comes to the same conclusion.

You can watch the scene here.

On a side note it is a manticore that the warlock uses in the attempt not a scorpion. The venom of this creature is what Oberyn Martell uses on his weapon in his fight against the Mountain so you can see it is highly dangerous.