Is it ever revealed what Crookshanks is?

When Hermione first got her pet thing Crookshanks, there was a mention that it looked kinda like a cat, but wasn't.

Was it ever revealed what Crookshanks really was?

You might also want to check the Crookshanks page on the Harry Potter Wiki. 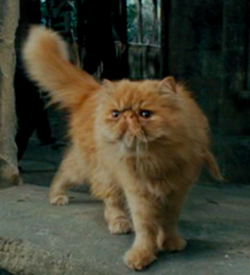 J.K. Rowling first hinted this in her description of a Kneazle in Fantastic Beasts and Where to Find Them and in a comment on her old website.

The Kneazle was originally bred in Britain, though it is now exported worldwide. A small catlike creature with flecked, speckled, or spotted fur, outsize ears, and a tail like a lion’s, the Kneazle is intelligent, independent, and occasionally aggressive, though if it takes a liking to a witch or wizard, it makes an excellent pet. The Kneazle has an uncanny ability to detect unsavoury or suspicious characters and can be relied upon to guide its owner safely home if they are lost. Kneazles have up to eight kittens in a litter and can interbreed with cats. Licences are required for ownership as (like Crups and Fwoopers) Kneazles are sufficiently unusual in appearance to attract Muggle interest.
(Fantastic Beasts and Where to Find Them)

Neither of these characters can perform magic (Filch’s Kwikspell course never worked), but they still function within the wizarding world because they have access to certain magical objects and creatures that can help them (Arabella Figg does a roaring trade in cross-bred cats and Kneazles, and if you don‘t know what a Kneazle is yet, shame on you).
(JK Rowling's old website - Extra Stuff - Miscellaneous - Squibs)

Spooky Magdalen: who would win in a fight, Mrs. Norris or Crookshanks?
J.K. Rowling: It would be brutal and very close, but Crookshanks' Kneazle ancestry would bring him out on top.

And not that the current Pottermore has any more authenticity than the wiki, but they confirm this in their fact file on Crookshanks.

Crookshanks' type of cat's face is known as a "pansy face.". Based on these markings, Crookshanks would have the characteristics of a hansa Himalayan, or ginger Himalayan cat. He could also be a Persian, but due to his face shape the former is more probable. Many people get these breeds confused.

8
How intelligent/magical is Hermione's cat?
29
Did the Harry Potter supplemental books contain clues relating to the main storyline?
11
Why would Hermione choose a cat for a pet?
20
How does Mrs. Norris communicate with Mr. Filch?
14
How does Sirius Black as an Animagus communicate with Crookshanks?
7
Is there any evidence that Arabella Figg bred Crookshanks?

11
Why would Hermione choose a cat for a pet?
5
Were there any other half-magical creatures in the Harry Potter world?
2
Did Harry ever trim Hedwig's talons?
13
Can Hogwarts students have more than one familiar?
1
When was it revealed that Snape liked Lily?
29
What did Hagrid do to Mrs. Norris/Filch?
3
Was Crookshanks originally owned by the Potters?
24
Did J. K. Rowling contradict herself in the Polyjuice Potion article on Pottermore?
5
How did Crookshanks know how to stop the Whomping Willow?
4
Why did Sirius attack Gryffindor tower the second time?