Is this a production goof or am I just not seeing the connection?

Am I wrong or do the windows of Ten Forward not fit anywhere on the complete saucer section exterior of the Enterprise D? Shots appearing in season 2 episode 1 "The Child" which include a view looking in to Ten Forward seem to create more of a disconnect. Or am I missing something?

Ten forward was originally intended to be on the underside of the leading edge. The location can be seen clearly on the original deck plan by Senior Designer, Michael Okuda 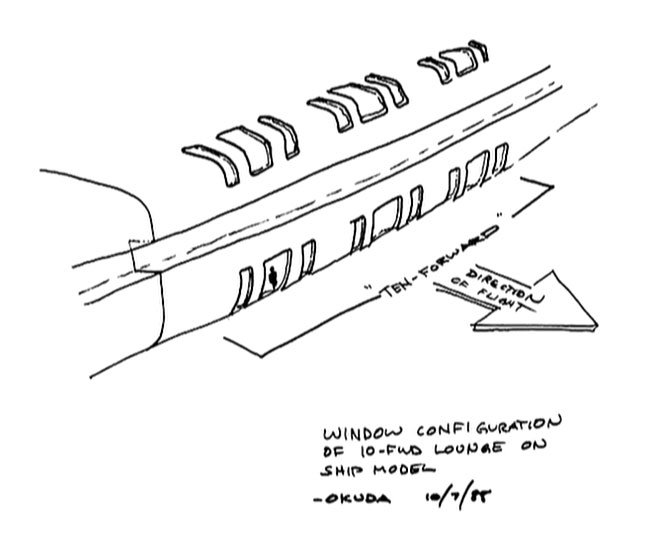 Per Ex Astris, the observation windows were ultimately moved up to top side of the leading edge, presumably so the set could be recycled into bedrooms or observation lounges as the need arose (e..g all of which have windows that slope inwards). 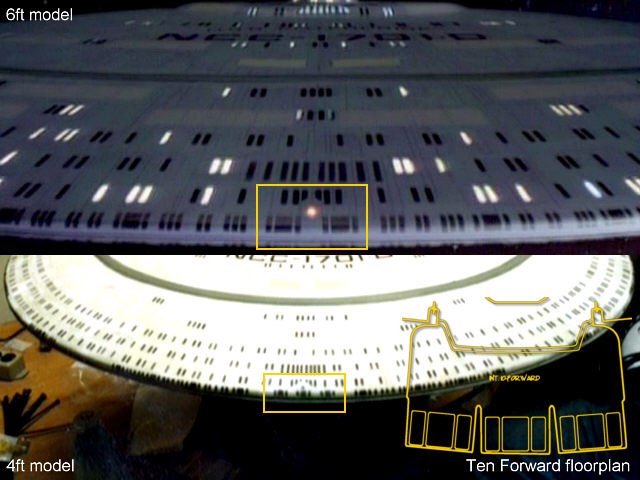 The "disconnect" you're describing may come from the fact that earlier episodes used a slightly different (4ft) model from later episodes. The earlier model matched the floor plan exactly, with three forward windows whereas the later model only had two sets of windows.

You are correct, the first model built for the effect shots of Enterprise D did not have the Ten Forward windows in the right place.

During the third season a second smaller, but more detailed model was built that did have windows that matched up with the Ten Forward set.

The model was first used in "The Defector".

The Star Trek the Next Generation Companion.

Not the answer you're looking for? Browse other questions tagged star-trek star-trek-tng uss-enterprise production or ask your own question.