Was there any canon description of the extent of Barbara Gordon's paralysis?

This question has been nagging at me as I've been reading some Batman comics for the first time. I cross-referenced my interpretation of various things we see her doing with a very informative Wikipedia article (Spinal Cord Injury), and came to a few conclusions.

Clearly, her paralysis affected only her legs. She obviously had use of her arms, and I believe there's plenty of canon evidence that she twisted around in her chair, so she had control of her trunk and abdominal muscles.

The damage (at least to her motor control) was clearly untreatable by conventional medical means (the procedure that she underwent in the New 52 continuity was, I believe, considered experimental). Otherwise, I have to believe that Commissioner Gordon and/or Bruce would have done everything possible to help her recover. It is, however, unclear to me how much sensory function she had in her legs.

Based on the original panel in The Killing Joke, I don't believe she should have been paralyzed at all: the bullet appeared to hit her in the hip, not remotely close to the spine. However, it is possible that the bullet ricocheted off her hip bone; I don't know enough about gunshot wounds to say for certain.

So my question is in the title, but there are a few specific things I'm particularly interested in:

This (cropped) panel from the New 52 reboot of Batgirl answers all three of your questions. 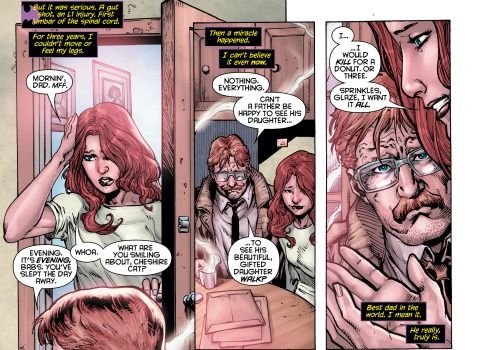 I'll take them in reverse order

3) Her medical condition is described as being an "L1 injury, first lumbar of the spinal cord". Someone with that sort of injury would expect to suffer a loss of

"motor and sensory from spinal region of L1 to all levels below. There is also a loss of bladder, bowel, and sexual sensation."

2) The panel makes it clear that she

"couldn't move or feel her legs"

1) Which confirms that she has no motor control or feeling in her legs or any point below the L1 verterbra. Any twisting would come from her trunk rather than her hips.

As to why the Joker's gunshot resulted in her suffering a spinal injury, Batgirl #1 offers a reverse-angle view of the incident. While the bullet may have entered from the hip, it definitely seems to have exited through her back. 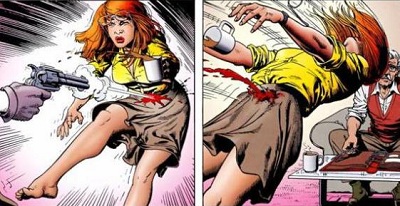 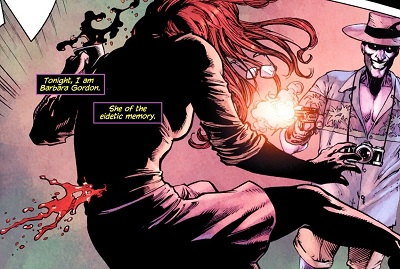 11
In the New 52, did Barbara Gordon become Oracle?
14
Why was Batgirl changed from being Commissioner Gordon's daughter to his niece?
4
Who was James Gordon's father?
13
What was Jim Gordon's original plan and who else was involved in it?
9
Is there any significance behind Joker's aliases?
9
Are there any other examples of a Batman - Batgirl relationship besides the one given in "The Killing Joke Movie"
6
Who is responsible for the scene involving Bruce and Barbara in 2016 "The Killing Joke"?
5
Was there ever an Asian Batman?