Has Marvel commented on the extra Infinity Gauntlet?

Has Marvel commented on this issue at all in interviews? Has the gauntlet been retconned into being some other gauntlet, or some other piece of the Infinity Gauntlet puzzle?

@afiqtobi9 is right about this.

In the Age of Ultron end credits, it’s a left hand glove:

But it’s a right hand glove in Thor: 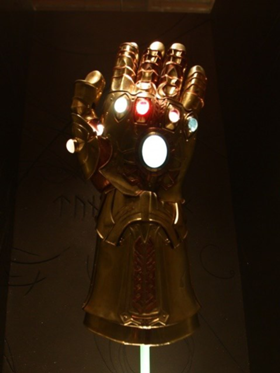 It’s even confirmed by Kevin Feige (from cinemablend.com):

"There are two different gloves. That was not Odin’s vault that you see at the end." - Kevin Feige

Making them a pair of gloves.

Update: But in Thor: Ragnarok, Hela made it clear that it was fake Gauntlet. And there is only one real Gauntlet.

Note: Copied from my own answer from Movies and TV.

They clear this up in Thor Ragnarok.

Hela explains that the Infinity Gauntlet in Odin's vault, like half the items there, is a fake.

We don't know for sure that the MCU version of the Infinity Stones require a gauntlet at all - the one sitting in Odin's vault could have been simply an easter egg for fans, much like the other artifacts seen there.

As far as I could find, no one from Marvel has commented on either the Gauntlet or The Eye of Agamotto, which will probably tie into the upcoming Doctor Strange movie. Therefore, any answer to the question of the gauntlet will require speculation on our part. From the comics we know that the gauntlet itself (below, at right) has no innate power except when combined with the gems. It's simply a vessel used to contain and control the immense power of the six stones. 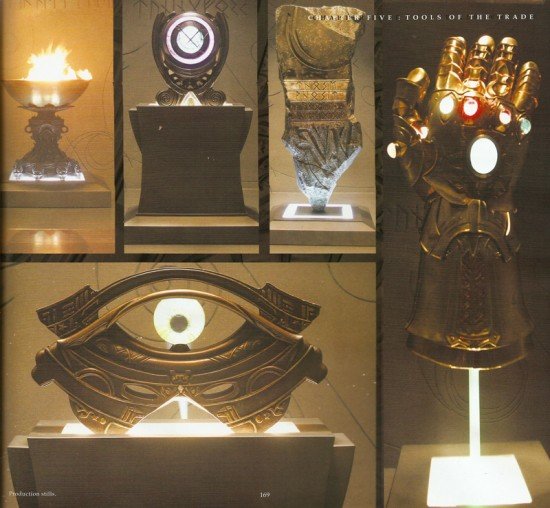 Odin didn't want the Aether on Asgard. Despite the recent incursion by Dark Elves, Asgard is one of the most heavily defended places in the universe. Even so, having the gauntlet plus TWO of the stones in the same place would be just asking for trouble.

Also, in regards to the gauntlet prop already having the "gems" in it, here's my opinion:

The Infinity Stones of the MCU seem to be energy-based rather than actual gems, with each one taking a different form. The "gems" we see in the gauntlet - IF the gauntlet is used at all - are very likely devices which collect the energy of each stone.

And one more speculation, just for the heck of it:

The Eye of Agamotto allows Strange to see anywhere at any point in time. How cool would it be to find out that the Eye (or the gem in the middle at least) is actually the Infinity Stone of Time, which is still unaccounted for as of GotG?

So Asgard has the Tesseract and the Gauntlet. The Collector has the Aether. And the Nova Corps have the Orb. Whatever those colorful things which decorate the Gauntlet are, they are clearly not infinity stones.

This was addressed in an interview with Kevin Feige. Out-of-universe it was merely intended as a background 'easter-egg' for committed fans. There wasn't a plan to have it appear in later films.

You retcon the Infinity Gauntlet in this. Kind of. There’s an Easter Egg in–

Yeah, the first Thor film. And you kind of deal with it here. Can you talk about the story of getting there?

Going all the way back to Phase One, where Infinity War was a barely a glint in our eye, we were working on Avengers and trying to get just put that all together for the conclusion of Phase One. And it’s in one shot. It’s in one shot in the background.

In-universe, there was apparently some concern that someone might have a/the real Infinity Gauntlet, so Odin had a fake made and shoved into his vault.

“Odin has a history of doing what he wants to do to maintain power,” Fiege told /Film. “If the Asgardians knew that there was something that had that kind of power, that could theoretically wipe out Asgard and whatever else with a, in the comics, a literal snap of the fingers. They might question Odin’s ability to protect them,” he continued.

So Odin put a fake and he goes, it’s fine, I got it. Look, it’s fine, it’s in our vault, don’t worry about it. And it’s not until Hela goes down there. It was fun being back in that vault, by the way, for the first time since Thor 1. It was just the opportunity to call it a fake. So for people like yourself, and like all of us at Marvel Studios who were paying attention, that answers that question. And for people who have no idea that an out-of-focus Infinity Gauntlet appeared in the back of Thor 1, it just showcases her knowledge and her sort of disgust with the way Odin had handled things on her way to the true power that is below the surface.

The Infinity Gauntlet in Odin' vault is for the right hand. In the Avengers 3: Infinity War trailer, Thanos is wearing the gauntlet on his left hand.

Hela referred to the glove as fake (in Ragnarok) which was just the studio saying "This is our plan" if you look at all the artifacts. In all art work and comics Thanos is wearing it on his left, left-handers according to old superstition being evil.

34
Which Infinity Stones have we seen so far in the Marvel Cinematic Universe?
11
Why didn't Thanos make an attempt to steal the Aether?
5
Who is guarding the Infinity Gauntlet in Odin's chamber?
15
The original Infinity Gauntlet
63
Were all titans as powerful as Thanos?
21
Was Thanos really waiting for all these characters to die?
9
Whereabouts of Odin's spear, Gungnir, after the events of Thor: Ragnarok
7
Are the Infinity Gauntlets from Avengers: Age of Ultron and Avengers: Infinity War the same?
13
Did Thanos use the full power of the Power Stone to punch Captain Marvel in "Avengers: Endgame"?