Do terminators ever laugh?

Has any terminator ever been shown to laugh? Can they even laugh?

Terminators don't have emotion but they can mimic feelings, such as anger, happiness, etc.

Though since the T-800 had so much trouble with even the concept of a smile, I doubt he (or the other terminators) would feel the need to fake a laugh.

The protector Terminator known as Cameron, from The Sarah Connor Chronicles, has laughed on a few occasions. The first was right at her introduction in 1x01, when she introduces herself to John and pretends to be human.

Another, the screenshot below, is from 1x02, Gnothi Seauton, around 15 minutes in. After Sarah makes a deal with someone, he comments on how quiet Cameron is and then laughs. Cameron joins in, presumably to try and indicate she's normal, after having been so expressionless.

It looks pretty natural and not forced during the laugh, although the sudden change of expression (both stopping and starting) does look a bit odd: 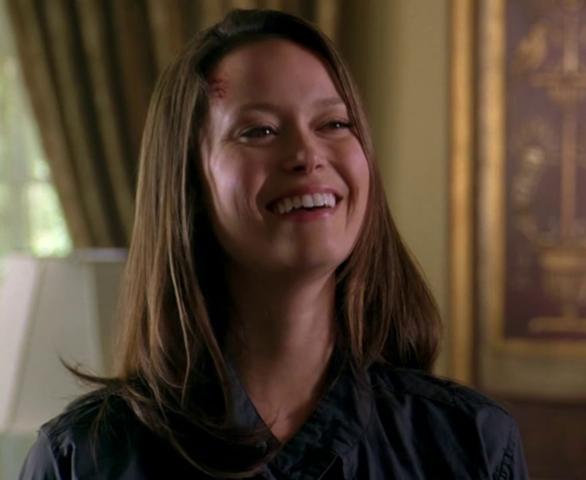 Yes, they can do it.

And once learned, they understand the message smiling gives (0:14)

And he does it later again when John instructs him to avoid killing while preparing for the police assault on Cyberdyne(0:17).

But it is a special case because it is after the second T800 had the chip function enabled which allows him to learn new knowledge. This is shown in a deleted scene where the T800 gives instructions to reset the chip in a garage.

The very good reason given in the movie for the chip lock is that Terminators could learn too much about humans, something like fascination and understanding. That would not help solving their mission.

Later models could, like the other answers indicated, mimic smiles better because of further improvement. Remember that the T600 had rubber skin and the T800 series had real skin.

42
Why don't Terminators have perfect aim?
11
Does Terminator 3 undermine the 'No Fate' concept?
11
How strong are Terminators?
19
Do terminators have a sense of smell and taste?
11
Was Skynet limited in how far into the past it could send back Terminators?
15
How did the police learn that John Connor's foster parents had been killed?
9
Can a Terminator feel affection?
5
When does Sarah Connor begin to trust the Terminator?
22
How did the Resistance manage to win the war and destroy Skynet in the future?
3
Why does Skynet need infiltration terminators?