Is there an issue where Deadpool kills off everyone? 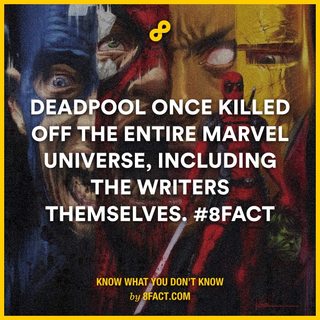 And I thought that if it was real, it would be a good issue.

So, is there any issue where Deadpool kills off everyone, as well as the writers?

This is the primary plot of "Deadpool Kills the Marvel Universe", a four-comic what-if 'killogy' event from 2011-2012. The official Marvel.com site has this to say;

"What if everthing you thought was funny about Deadpool…was actually just disturbing? • What if he decided to kill everyone and everything that makes up the Marvel Universe? • What if he actually pulled it off? Would that be FUN for you? • The Merc with a Mouth takes a turn for the twisted in a weekly horror comic like no other…"

At the very end, he literally breaks (well, cuts) the 4th wall, the suggestion being that he's going to kill the writers. 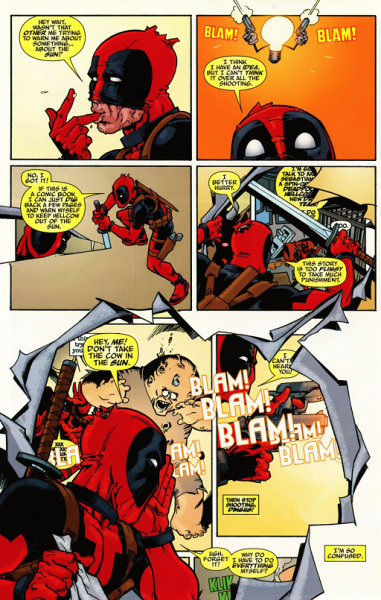 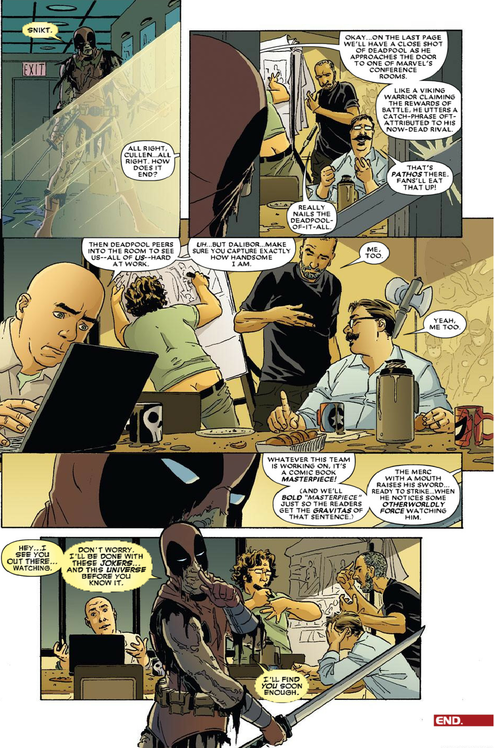 Remember the time Deadpool went a little TOO crazy and killed the entire Marvel Universe? Well, this isn't that. This is a DIFFERENT time. Writer Cullen Bunn and artist Dalibor Talajic (A.K.A. the creators behind DEADPOOL KILLS THE MARVEL UNIVERSE) have reunited for ANOTHER tale of Deadpool taking out all of your faves in the most horrific ways possible! It's gonna hurt him more than it hurts you…and you're gonna love it!

This time it doesn't end with the writers being killed though.

This is referring to the four-issue limited series Deadpool Kills The Marvel Universe.

In the storyline Deadpool Kills the Marvel Universe, the X-Men send Deadpool to a mental hospital for therapy. The doctor treating him is actually Psycho-Man in disguise, who attempts to torture and brainwash Deadpool into becoming his personal minion. The procedure fails, but leaves Deadpool even more mentally unhinged; as a result, he kills Psycho-Man and begins assassinating every superhero and supervillain on Earth one by one in an attempt (apparently) to rebel against his comic book creators. The book ends with him breaking into the 'real' world and confronting the Marvel writers and artists who are currently writing the book. Before he proceeds to enter he turns to the reader, promising that once he's done with this universe, "I'll find you soon enough."

Not the answer you're looking for? Browse other questions tagged marvel comics episode-identification deadpool or ask your own question.

12
Looking for a Deadpool comic where Deadpool poses as Batman
10
Was there a one-off Spider-Man public awareness / anti-drug comic given away with chocolate pudding in the early 90s?
4
Which X-Men timeline does Deadpool belong to (post X-Men movies)
3
Does a New Who Doctor use the “Broken Plate” analogy?
12
Was there ever consideration of a scene concerning Beast in Deadpool?
7
In which comic did Deadpool have the face of Tom Cruise?
15
Which was the comic where a kid mistakenly called Deadpool Spider-Man?
10
Is the Deadpool-caused superhero disappearance ever mentioned elsewhere?
15
Where was Stan Lee's cameo in Deadpool 2?
10
Comic story arc/issue where Deadpool is eaten by zombies and the zombies all turn into Deadpool clones