Why doesn't the Enterprise ever hit an asteroid?

The USS Enterprise and other related starships travel around using fusion engines, and using warp to travel great distances in a short space of time. Thing is, they never actually hit anything (besides from a couple of times, and the obvious exception of the warship in Into Darkness).

One would assume that anything they hit in warp speed would be vaporised, but wouldn't this also cause substantial damage to the ship (assuming no shields are online)? This would certainly be the case if travelling at non-warp speeds!

The Enterprise is far too large to maneuver to avoid small asteroids (or any asteroid when in warp).

So, why doesn't the Enterprise ever actually hit anything?. I'm pointing to TNG here mainly.

One of the primary systems that makes prolonged spaceflight possible in the Star Trek universe is the "Navigational Deflector".

The TNG Technical Manual explains the operation of this device in mind-numbing detail but in brief, it projects a series of low level static shields and deflector shields that, when coupled with a deflector-beam (basically a tractor-beam-in-reverse) is able to repulse all but the largest of objects. 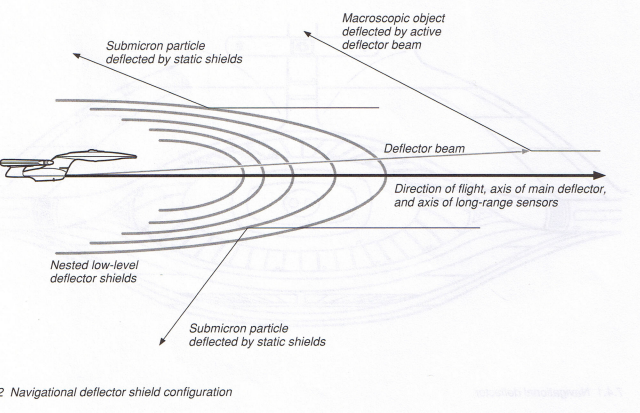 There are two pivotal technologies at play. One is the deflector shield, which as you will find well documented in this answer umm... deflects... any potential hazards away. Of course, what isn't very well documented is what the limits are. For example, you would expect this to be used as a military device if it were stronger. So how big of an object can you move with this?

Luckily, when it comes to faster than light travel, you don't need to worry about that because you're not travelling through space. With a warp drive, the space around you is itself travelling through space. As you ride along this distortion wave, I can't say for sure what would happen if an object happened to get bumped by your warp field, or if your warp field even exists in dimensions that matter would be able to interact with it. But if all we care about is what happens to our ship, then we don't need to worry because nothing is happening to our ship. As long as it stays within its warp bubble, it will be fine. As you can see here, the warp field appears similar in configuration to the field created by the deflector. However, since it is doing the travelling and we, relative to it, aren't moving at all, the dangers outlined above by the deflector dish are mitigated. 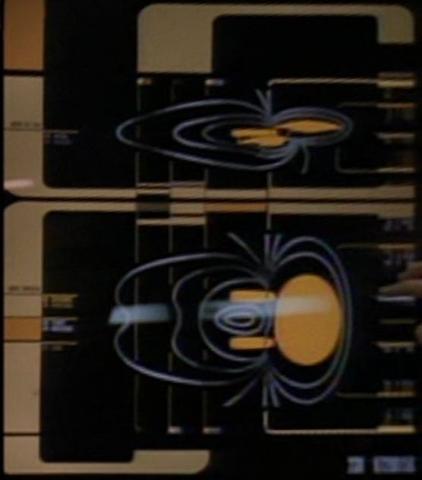 The deflector arrays do as they sound, deflect, they were made for travel to deflect particles away from the ship as something microscopic hitting the enterprise at warp would blow the ship up. They are to my understanding similar to the shields just less intensive. I believe the ship itself makes minute corrections in navigation to avoid anything of substantial size.

a ship traveling in a warp bubble is stationary, so I've read. so there would be no momentum and no equal and opposite reaction to surrounding matter so hell if I can tell you what that implies...

extreme pressure on the forward side as occupying matter gets in the way and extreme vacuum to the rear as the space you just occupied is left empty, right? these forces would try to squeeze you out the rear of your bubble like a Tijuana street taco.

But what do I know..

Because space is so damn big that hitting anything is next to improbable. The distances between stars, planets, and asteroids is massive when looking at cosmic scales. It's the same reason why you can zoom around in Space Engine at light speed and not hit anything.

25
What would be the effects of warp collisions?
13
Why do some Federation ships not have deflector dishes?

17
Are escape pods capable of warp?
2
What does it actually mean to travel in trans-warp?
2
What protects starships from debris floating in space?
90
Was Voyager really significantly slower than the Enterprise-D?
13
When was the Verteron Array built exactly and why wasn't it used against the Xindi when they were about to destroy earth?
2
Could a starship's impulse engine reactor produce enough energy to power the warp drive?
13
Has there ever been a warp / non-warp collision?
8
Were lithium crystals ever actually used in warp drives?