Here's a really hard one — we cannot remember the title of this film.

It's an anime film (probably Japanese), maybe made from 2010 - present.

The very first opening scene is of a female character climbing in or down into the ruins of a building. She finds a plate of spaghetti "frozen in time" because it's so old, the spaghetti and fork is sticking up in the air.

Then the main male lead character is also perhaps climbing in to these ruins. He sees the female lead, who is trapped frozen in a sort of futuristic pod or egg. There are many of the pod/egg things - all the others are dead, only the female lead seems to still be alive. She is frozen in a moment of terror with her hands up.

When he rescues her, there's a scene involving water rushing in, a futuristic corridor ... at the surface there is events involving trees, vines, and dragons.

Some other scenes from the movie:

These are all the facts we can remember about the film. In our house we had the DVD or BluRay around, say, 2011. But I just can't remember what the film was.

It sounds like you're describing "Origin: Spirits of the Past", an anime from 2006

Genetic engineering on trees was conducted at a research facility on the Moon to produce trees capable of growing in harsh, arid conditions. The trees gain consciousness, obliterating Earth's civilizations and destroying the Moon. Three hundred years later, Japan is a dystopia covered by the Forest, a huge expanse of sapient trees, and ruled by the tree-like Zruids, which inhabit the planet and control the water supply of both trees and humans. Agito, a young boy, and his father Agashi, as well as his friends Cain and Minka, live in Neutral City, a city carved out of the ruined skyscrapers which acts as both a buffer and a bridge between the Forest and the militaristic nation of Ragna. While the people of Neutral City co-exist peacefully with the trees of the forest, the nation of Ragna aims to destroy the Forest to restore the Earth.

One day, Agito and Cain race each other to see who can get to the water hole at the bottom of the city first. By disturbing the sanctity of the water hole and angering the Zruids, the two boys are separated. After stumbling upon a large machine with cryogenic pods, Agito accidentally revives Toola, a young girl who has been asleep for the past 300 years, and brings her to Neutral City. The Forest is angered by Toola's awakening, since she carries a Raban—a portable personal electronic device, worn as a necklace, that can be used for communication and a variety of other tasks. The Forest fears that she will fall into the hands of Shunack, a soldier of Ragna and also a person from the past who was awakened from sleep, and that he will use her Raban to locate E.S.T.O.C., an "environmental defragmentation system" with the ability to wipe out the Forest and restore human control over the world. 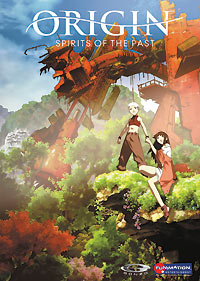 15
Looking for young adult book, possible from the last 10-15 years
14
Movie ID: 50s/60s time travel film with *terrible* plot holes
6
Dystopian anime film where main (female) protagonist is saved from execution
9
Movie with forest eating the moon?
26
Books about dragons and war from a cat-loving author
6
Movie about two people with springs for legs
6
Anime movie about futuristic racing
25
Book in which children escaping London get sent to an alternate reality
5
80s/90s anime/cartoon with grey robot protagonist with elongated head riding a hoverboard