Ships use ice shields to prevent damage from interstellar dust

I'm looking for a collection of short stories, one of which featured interstellar ships that needed huge shaped chunks of ice to protect from interstellar dust while travelling at near light speed. They had to replace the shields after a time and would get the ice from various inhabited planets. The story (I think) focused on one planet and a group of people opposed to giving up their water, somehow in the end the main character was caught on the ice shield when the orbiting ship pulled it up into space and froze.

You are almost certainly describing Songs of Distant Earth by Arthur C. Clarke. Note that TSoDE is a novel, not a short story (see below). 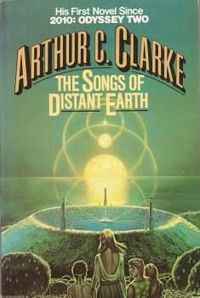 The novel tells the story of a utopian human colony in the far future that is visited by travellers from a doomed Earth, as the Sun has gone supernova. The Songs of Distant Earth explores both apocalyptic and utopian ideas, as well as the effects of long-term interstellar space travel and extra-terrestrial life.

Two hundred and fifty years after the end of Earth the Magellan arrives at Thalassa, the midpoint of a 550-year voyage to colonise the distant ice planet Sagan 2. Though primarily the objective is to replenish the ship's mammoth ice shield that had prevented micrometeors from damaging it during its interstellar journey, it soon becomes apparent that the human colony is still present and flourishing. Thalassa is the obvious choice for this operation, as 95% of the planet's surface is covered by water.

The tragedy with one of the main characters occurred in this story just as you describe.

This story was also released as a short story (of the same name and with many of the same events) which you can read in the Collected Stories of Arthur C. Clarke.

7
SF colony novel, most likely from before 1972