What are those things that the Silent Sisters wear?

In GoT there are those medic ladies who attend battlefields, and also people who have died.

They wear this thing that sticks up behind their head, with a star on it.

Who are these people, and what is this thing's purpose?

I assume you are referring to these ladies: 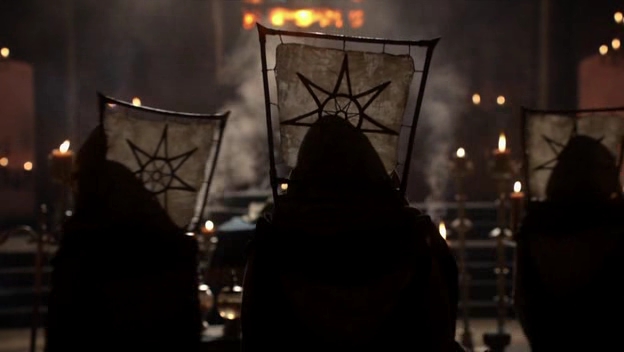 They are called the Silent sisters, they are basically nuns from the Faith of The Seven (As indicated by the Seven Pointed Star insignia they bear) who have sworn vows of silence and chastity in service of The Stranger and they tend to the dead and the dying.

The most likely reason they wear the insignia in such an obvious manner is that as they are sworn to silence, they cannot tell you who they are, so they need a way to indicate it without having someone following them around explaining it. Similar to the slave tattoos which Talisa Maegyr mentions to Robb in The Prince of Winterfell:

Talisa: A man ran over. He had a fish tattoo on his face. In Volantis, the slaves have tattoos. So you know what they are without having to talk to them.

1
Why are most of the main characters White/English in Game Of Thrones?
6
Do fighters in the Game Of Thrones books not wear helmets?
4
Elite troops and Single Combat in Westeros
19
Is it true that the people who live on the world in Game of Thrones are not, strictly speaking, human?
38
Why are there Lords and Sers on The Wall?
0
Do any lords of the Northern Houses know this character returned from the dead?
33
Why were there so many willing accomplices to the Red Wedding?