This book is about an explorer (with robot companion) who walks through a "gateway" into the future/parallel world. In this world, things that are created do not fall into disrepair, instead things get better.

The main character is kidnapped early on in the story and forced to labor by beating the outside of a castle with a spear. It is explained to him that this makes the wall better and able to resist attacks by these weapons. In his cell, he meets a man wearing an extravagant shirt and asks about it and the man explains to him that the shirt has been in his family for several generations, which is why it looks so nice.

To escape from the jail cell, the man tears one of his zippers from his jump suit and uses it like a saw to cut a hole in the wall. He escapes with the man in the fancy shirt and a woman.

The woman, is something special in this world. (She can focus on the change that is happening to an item and somehow enhance or speed up the process)

The man makes a wheeled cart for them to escape in. While the wheels are at first rough and wobbly, they soon "become better" and spin better.

It's David Brin - The Practice Effect.

In this world, instead of objects wearing out as you use them, they improve. This is referred to as the Practice effect. For example, swords get sharper with use, baskets get stronger the more things they carry, mirrors, furniture and decorations look more attractive the more they are looked at. The downside to this being that an object's condition deteriorates over time if not put to use. Under this system, members of society's higher strata employ servants to Practice their own possessions to perfection. 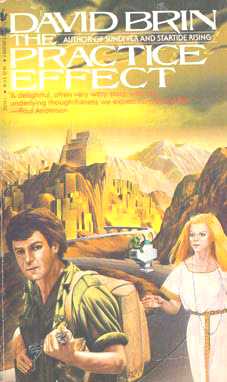 19
Sci-fi book with a scientist discovers and goes to an alternate reality, where items improve with use
3
Book With Vehicles Sliding on Tracks using a Frictionless Liquid

11
Story Identification: 1980s series about four characters who escape a post-apocalyptic city in a bubble
4
Book series where only people with the right ability can do things like operate machinery
20
Earthlings create and interact with a pocket universe; universe inhabitants eventually desire to escape
7
Series set in space with children and teleportation belts
4
Trying to identify a story from a quote - “poke, poke - die, die”
4
Girl finds new world in mere pool?
10
Novel about colonists on new world
13
Dystopian world split in half: rich and poor
7
Book involving children traveling between alternate worlds via switches