I remember I once read 1 or 2 books in this series but I am unable to find any reference to them now. I apologize for how vague this is going to be.

The main characters name was Cat (or Kat)(or he was a cat).

It was not set on earth.

One of the books was about a mining colony. The only specific detail that I remember is that the main character was given an earring with an emerald bead which was very significant. (almost a status symbol)

I believe this is the Cat Series by Joan Vinge (No clue why it has books not part of the series listed there, but the series is 3 books).

It follows the main character named "Cat" who is half-human and has telepathic powers. He starts off-Earth and is dragged back.

The cover of the second book seems to highlight an earring. 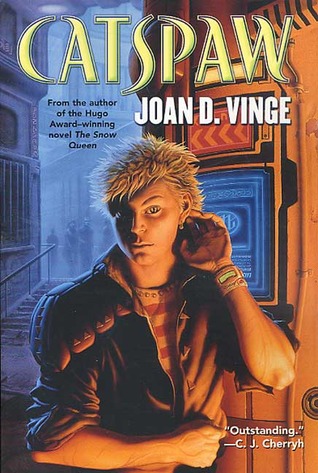 This excerpt mentions an earring which seems to be a relic of some sort.

“Your ear’s bloody,” she said. I touched it with my fingers, remembering, feeling the earring. “Just got this. Supposed to be a relic.”

Might be Joan D. Vinge's Cat series. The books are: Psion, Catspaw, and Dreamfall. The series premise is that there are human-alien hybrids that have telepathy to varying degrees. These "Psions" are treated, well, like pre-civil rights-era Blacks in America. The first book, Psion, is set on a mining colony where the Psions are being used as slave labor. The main character, Cat, gets caught in the middle of a violent conflict between Psions and the "regular" Human coprporate-government. In the second book, Catspaw, Cat is hired by an insanely rich corporate family as an extra security measure (because of his telepathy).

I don't see much about an earring, 'cept for this in the second book (Catspaw):

As I passed the bathroom mirror, a sudden flash of green caught my eye. I stopped, looking at myself, turning my head - saw the light wink again. My ear. I reached up, touching it, with a slow smile starting. There was an earring in my ear, one I’ d never seen before. Green glass, catching the light when I moved, like a cat’s eye. I knew I hadn’t put it there… I figured I knew who had. I stuck a drug patch behind my ear, and went out of the room.

“That earring. I wouldn’t wear it again, if I were you. Particularly not around Charon.”

My hand went to my ear, covering it, protecting it. “Why not?” Not quite able to keep all the tension out of my voice. “It’s only a piece of glass.”

His lips pulled up. “It’s an emerald, you fool.”

I stared at him, still touching my ear. “What-?” He’d scanned its density just by looking at me.

He looked at me now, and shook his head again. “You’re lying about where you got it, too. It carries a taMing registry code; it belongs to Lady Lazuli.”

My hand dropped to my side. I turned and went out the door. I felt his eyes following my back as I crossed the endless, lifeless room beyond.

It's so obviously out of his price range, it causes a fair amount of trouble.

13
old fantasy novel with ravens or crows and magic staff
3
Heretic among the stars?
5
Identification: animated TV series 2000-2005, possibly canadian, using “Right here, right now” music
4
Help identifying a story where kids discover some kind of wormhole in a garden
14
Book series: Minerals crashing into the sun, emigrating cult, and frozen man
4
Help me remember this book from the 90's
7
Scifi novel. Colony on the moon, nanotech, sex changing journalist main character
8
Short story or novella about a man who remembers everything
8
Book: What book was about a virus trying to infect Internet kernels?
19
Fantasy novel/series with young man who discovers he can use magic that is outlawed