Why didn't the Enterprise attempt to fire on Nagilum?

In "Where Silence Has Lease," the powerful Nagilum declares its intention to do experiments on the crew, so that it can learn more about the concept of death. It claims that up to one-half of the Enterprise's crew may be killed.

Captain Picard and Commander Riker decide to arm the auto-destruct sequence, instead of attempting to engage the entity. Granted, photons and phasers probably wouldn't work on a being that can manipulate space and destroy crew members so casually, but would it really hurt to try?

The ship's exploding would kill everyone; phasers and photons may be successful, and even if they weren't, the worst that Nagilum could do is destroy everyone on the ship anyway. 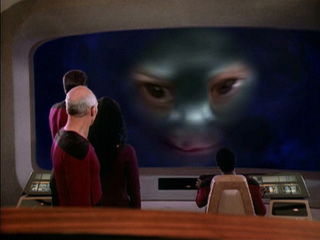 Nagilum did not manifest itself as a target they could lock their weapons onto and fire upon. There was this strange void which encompassed the ship (may have been an artifact created by Nagilum rather than Nagilum itself). The face of Nagilum was simply an apparition on their viewscreen.

The self-destruct ploy was simply to deny Nagilum the opportunity to do the thing it wanted to. It was a statement by Picard that despite Nagilum's power, it's control over the Enterprise had limits, and could not usurp the captain's free will. In other words, it required the captain's co-operation. The destruct order may have been a bluff, gambling on Nagilum's curiosity about these humans and that it might learn more by setting them free.

It does raise the question of why Nagilum didn't simply let the clock run out... so that it could confirm that these humans would rather extinguish themselves than submit to an arbitrary authority. Of course the series would have come to rather an abrupt end if it had.

This is explained pretty well in the show script. The entity known as Nagilum manifests directly onto the viewscreen itself, rather than as a big giant head floating in space that they can take pot shots at:

EMPHASIZING MAIN VIEWER (OPTICAL) : Suddenly, a visage like the bridge crew has never seen! A great human eye is peering in.

Outside the ship, their sensors only show what he/it wants them to see.

DATA : Captain, sensors show nothing out there. Absolutely nothing.

PICARD (V.O.) : Captain's log, Stardate 42194.7. It is obvious that whatever we have met sees no value in our kind of life-form. How do we fight something that both is... and is not there?

On top of that, they already tried firing photon torpedoes at one of Nagilum's illusions. It's clear that they represent no threat to him, even if they could find something to shoot at.

DATA : Captain, sensors can locate no debris from the Romulan ship.

The last thing that Picard wants to do is to give the creature more satisfaction. He views this as a (deadly) game and reasons that the best way to win is to threaten to take his ball home. Firing weapons and/or coming up with ever more innovative solutions simply prolongs the game.

Omnipotent beings are rarely effected by phasers or torpedoes. I think the better question would be why Nagilum didn't just scan the Enterprise computer which would have extensive information on human anatomy, birth, death etc.