Thanks for any help it's much appreciated. The planet had been colonized but they had miscalculated the weather patterns and most of the planet was underwater. The wealthy families had cities built up much like Venice and it was mostly traversable by canal but there were walks that connected building also. The main protagonist was a teen girl who had to infiltrate the city and if I remember right had to steal to do it.

I'm thinking Angel with the Sword (Merovingen Nights, #0) (1987) by C.J. Cherryh because I recall the Venice-like city. I don't recall much of the rest, however.

Against her better judgment, Altair Jones, 17, rescues an unconscious man from a canal near her poleboat. She is fascinated by Mondragon's good looks and elegant ways and begins to fall in love with him. Even though she knows there is no future for a water rat like herself with such a man, she decides to watch over him and rescue him from his enemies; enemies who turn out to be the most powerful people in the upper city. 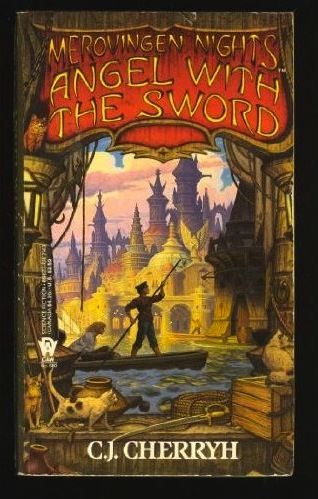 12
SciFi/Horror movie featuring alien city landing in a US desert, forshadowed by cave paintings
4
Looking for a Book about people Called Talents
2
Water planet where people live on organic rafts on the surface while the elites live in a city under the sea
22
Short-story about moving “cathedral” cities on a Mercury-like planet
8
Identify novel featuring aliens living in a spiral building on a colony world
15
Book about a water planet, part of a human empire
8
Looking for a book — purple grass on an “alien” planet
5
Looking for a story about people who live in a giant's teeth
16
Massive city structures that 'crawled' over the plains due to being deconstructed/constructed in one direction