Why didn't Chewbacca get a medal after the battle of Yavin?

At the end of Star Wars Episode IV: A New Hope, there is a medal ceremony where Princess Leia awards Luke and Han each a medal for their heroism. Why didn't Chewbacca receive one?

Note: While Chewbacca's Wookieepedia entry states that he did receive one, this information is not Disney/G-canon since he did not receive one on the Blue-ray version, making the absence of medal canon.

Although not depicted in the film, according to the Star Wars movie novelization ghostwritten by Alan Dean Foster and the comic adaptation, Chewbacca did receive a medal. 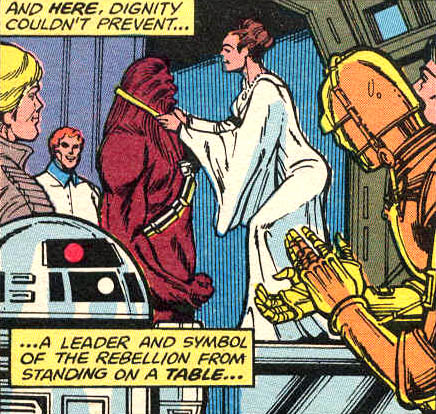 She placed something heavy and golden around Solo's neck, then Chewbacca's--having to strain to do so--and finally around Luke's.

Was the 7'2" Chewie too tall for the petite princess to reach during the ceremony? or...Was the medal too small and not accommodating enough for such a furry Wookiee? The answer? Simply none of the above. It just wasn't written into the Star Wars script. 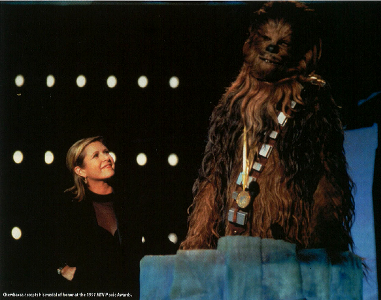 The answer from Star Wars Insider is probably the best answer you will get from Lucasfilm.

It is possible that when it was first filmed, as per aerial military tradition, only the captain would receive a medal of achievement (whatever medals given to people killed in action would of course be received by all). Since Chewie is only a crewman (although he clearly does most of the work), he wouldn't have received one.

This was addressed in the Official Star Wars Fan Club Magazine #002 from 1978. In short, Chewie's people don't agree with medals. He was rewarded with a party instead. 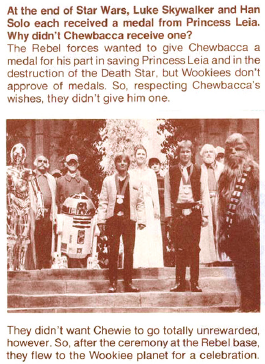 At the end of Star Wars, Luke Skywalker and Han Solo each received a medal from Princess Leia. Why didn't Chewbacca receive one? The Rebel forces wanted to give Chewbacca a medal for his part in saving Princess Leia and in the destruction of the Death Star, but Wookiees don't approve of medals. So, respecting Chewbacca's wishes, they didn't give him one.

They didn't want Chewie to go totally unrewarded, however. So, after the ceremony at the Rebel base, they flew to the Wookiee planet for a celebration

Additional out of universe reason:

As per Bmag's interview with Peter Mayhew:

With our time running out, I have to ask him one question that’s bothered me since I was a kid. At the end of the original Star Wars, Luke Skywalker and Han Solo are given Medals of Bravery by Princess Leia for their role in destroying the Death Star. Chewie, who played just as important a role, stands off to the side without a medal. What gives?

“I think you better ask George [Lucas] about that,” Mayhew laughs. “Actually, I think it was one of two reasons. One, they didn’t have enough money to buy me a medal. Or two, Carrie couldn’t reach my neck, and it was probably too expensive to build a little step so that I could step down or she could step up and give me the medal“.

This sounds like his own theory which may be incorrect in light of some of existing answerd - but I figured given who the source is, it deserves to be posted as an answer as well.

In either the book or the comic book, there was another line that stated Chewie also got a medal, but due to his height, Leia couldn't put it around his neck, so he would get it later.

That would evade the canon issue, since it adds to what's there without contradicting it, but it doesn't explain why he wasn't presented with the medal and allowed to put it on himself.

According to Disney canon, he did get a medal.

THE WOOKIEE SIGHED, a low rumble, and gazed at the medal in his palm. On the humans it looked substantial and solid, fit to be worn around the neck. In his hand the scale was altered, and if he brought his fingers together he could conceal it entirely. A pretty thing, hastily engraved in a stylized flower meant perhaps to recall the emblem of the Republic. At its heart a rising sun, halfway above the horizon, both symbolized the dawn of a new hope in the wake of this victory over the Galactic Empire and recalled the Death Star’s destruction.

He sighed a second time, tucked the award into the satchel that hung from the bandolier of bowcaster ammunition slung over his left shoulder, and leaned forward in his seat to peer out the cockpit of the Millennium Falcon...

Despite all his posturing and swagger, there was a core to Han Solo as golden as the medals they’d all received for their part in the recent battle.
- Star Wars: Smuggler's Run: A Han Solo and Chewbacca Adventure

In Adywan's Star Wars Revisited, a number of changes were made to correct production mistakes in the movie, revert ill-advised changes (e.g. Han shoots first in, the Han and Jabba scene in Mos Eisley was reverted), etc.

Changes #4 and 5 under "Celebration" are related to Chewie getting a medal. (SWR is discussed in Episode #12 of Back to Work: Chewie's medal is non-canonical).

Although the title of the episode suggests that Chewie's medal is non cannon, Benny's answer about it being in the novelization--in a way that doesn't contradict the movies--suggests it actually is, which ironically makes this revisited version of the movie more canonically descriptive than the official revised editions. Plus, Han shoots first.

The canon reason for it was the Wookiee race don't approve of tangible rewards like medals, so the Alliance chose to have a private celebration on Kashyyyk. George Lucas later said he did get a medal, but not during the official ceremony because Leia was simply too short, and it wasn't dignified for either party to stand on a table or kneel, respectively.

According to the Marvel Special Edition Star Wars comic from 1977, Chewbacca did receive a medal but he was just too tall for the Princess to put it on him during the ceremony. 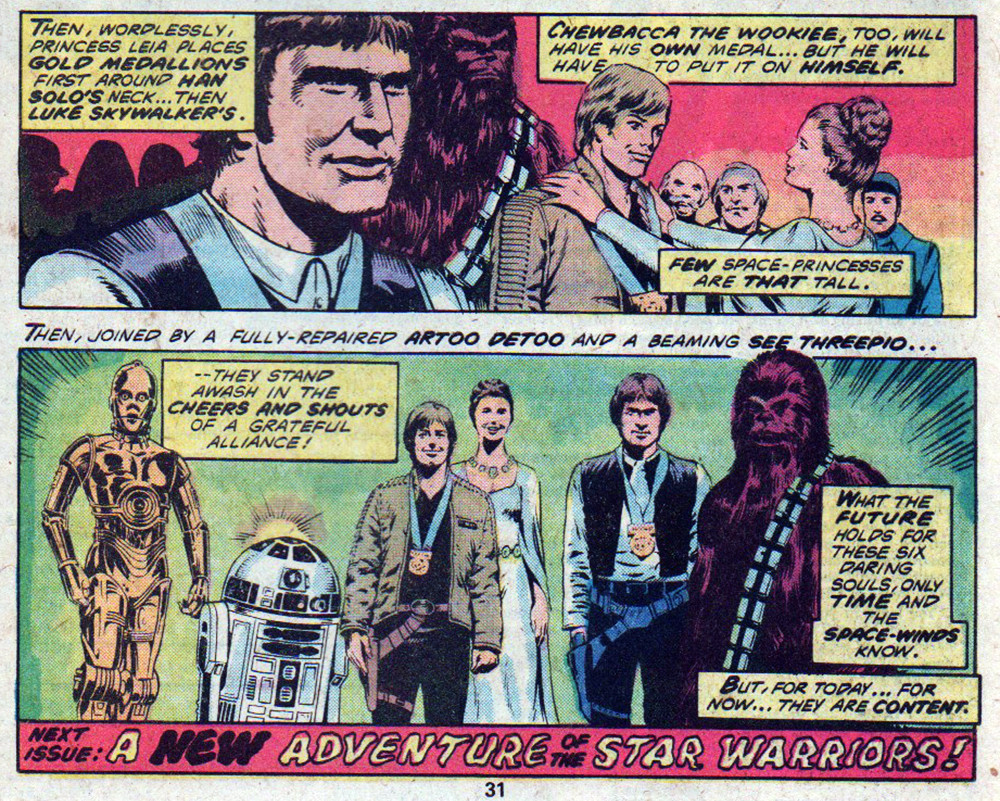 32
Why is it called "Han shot first"?
3
What did Maz Kanata give to Chewie?

30
Why would the Larses need a translator droid that spoke Bocce?
25
Was "a little short for a Stormtrooper" correct?
27
How did Luke suddenly know that Leia was a "Princess"?
6
Is there evidence that Lucas intentionally introduced similarities between Episodes I and IV?
40
Is there really "No Underwear In Space?"
12
Who first had the idea to help destroy the Death Star - Chewbacca or Han?
5
What did Rey and Chewie tell Luke about Han's destiny?
21
Exactly which act of bravery are Luke and Han awarded a medal for?