Why does Data have to use a computer in Star Trek?

In the earlier episodes of The Next Generation is where I noticed it, and I realise he could be inputting commands into the command terminal, but why isn't his positronic brain interfaced with the command console in that case?

I can't remember the exact example but there are episodes where he goes to the computer to look things up despite having encyclopedic knowledge of everything which could be known by the computer. Any explanation?

Because it's complex and not a good idea.

In "A Fistful of Datas" exactly that is tried. 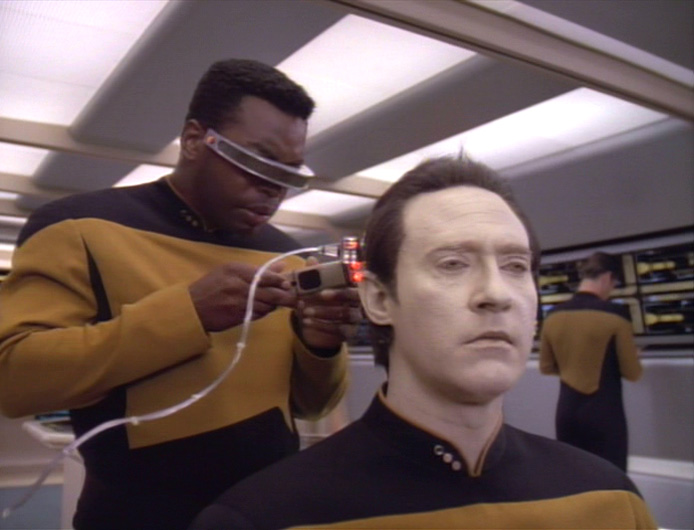 It resulted in a mix-up of Datas thoughts and ideas with the computers database almost crippling the ship. Data in turn was "infected" with gun-slinger personality-traits from a program running on the holodeck.

LAFORGE: We think our interface experiment may have caused one of the computer's core subroutines to be altered.

DATA: When the interface malfunction occurred, subroutine C forty seven was replaced by elements from my personal programming.

DATA: That would explain why your music composition programme began playing The Slavonic Dances. I have been analysing the collected works of Antonin Dvorak.

LAFORGE: It's the same with Doctor Crusher's play, and with the food replicators.

RIKER: The replicators on decks four through nine are producing nothing but cat food.

DATA: I have been formulating nutritional supplements for Spot.

If Data had a wireless link to the ship's computer, his body would mostly just sit there and do nothing. This looks ridiculous to the viewers, because we don't have the cultural context to appreciate it. It's also really boring for the actor.

Also one could speculate that Data's core programming has a preference for using the same input devices as any other humanoid to allow other humanoids to find him less weird. We know that Soong experienced problems with acceptance of his androids (particularly Lore, although with good reason given Lore's behaviour) so he would surely have given them programming to try to help them fit in.

We have seen that Data's capable of using those conventional input devices at great speed when necessary, and also direct interfacing with various computer systems, but this is reserved for when it's really necessary.

As for the episode where Data's subroutines end up inside the ship's computer and all that mess happens, that's either total nonsense or Starfleet's programmers are really, really bad at their jobs. And so was Soong, apparently.

Actually, given what happens to the holodecks on a regular basis, and that it's apparently trivial to make a mistake when flying a shuttlecraft and have the warp core breach without the onboard computer taking any emergency action by itself, Starfleet's programmers really are terrible and should all be imprisoned on charges of reckless endangerment. They certainly have various issues with the idea of network security.

One aspect that I'm surprised isn't mentioned is Data's endeavor to become more human. I'm not discounting the other answers: it certainly is a plot device to have Data acting and speaking to the computer and crew members like any everyone else and they certainly did attempt to explain (or at least hint at) the incompatibility of positronic and isolinear circuits.

However, Data certainly adopted a number of anachronisms for the sake of relishing in the human experience. He paints, learns to dance, tries to be a stand up comedian, sings, plays the violin, emulates sleep (maybe just to get out of doing a 24 hour duty roster? if so, that's his most human conceit), learns to dream and accepts foreign hardware that, to any objective computing standard, is a resource sink and distraction at best and a malicious attacker at worse (the emotion chip from Lore).

In his own words:

TIMOTHY: You sound like you don't want to be an android.

DATA: I am an android. That will never change.

TIMOTHY: But if you could change, would you?

DATA: I have often wished to be human. I study people carefully in order to more closely approximate human behaviour.

In other words, even if he could interface directly with the main computer without inadvertently corrupting both their programming, he would still choose to behave as a humanoid crew member while fulfilling his regular duties.

Also, typing and speaking don't hold him back very much, as his fingers can fly over the keys at super human speeds when required. (I can't believe I can't find a clip of his fast typing.) Ditto for speaking to the computer. Even without a WiFi integration circuit, Data is far more efficient in his duty than a standard issue Star Fleet officer.

Fast-typing/speaking is obviously not on par with an optical connection, but for every day ships operations tasks it clearly suffices. Perhaps a better question is why they even have a crew on the ship; the ship's computer is capable enough to fly itself, if the engineers put a little more effort into it. Unmanned probes could probably explore a lot more efficiently and cheaply than the more limited Star fleet. Of course, dramatic convenience is still the main reason: the only thing that would make for more boring television than a silent android flying through space is a silent unmanned probe flying through space.

Data, like his "brother" Lore, was created by engineer, scientist, programmer, and inventor Dr. Noonien Soong on the planet Omicron Theta, which was stripped bare by the so-called Crystalline Entity — see "Datalore".

If you watch this episode and other episodes of TNG dealing with Data's back story, you will see that the colony on Omicron Theta was not especially technically advanced. Given that Soong's primary goal was to create a fully functional positronic neural net (Data's brain) inside a humanoid shell, and given the general lack of technology elsewhere in the colony, I would say that it was not high on Dr. Soong's priority list to give him the ability to access computers and other electronic devices by non-humanoid means.

One could ask, why wouldn't Starfleet or Geordi later augment Data to have that ability, given how useful it might be? It was emphasized many times in TNG that most members of the Enterprise D crew consider Data to be an autonomous life form, and so they likely would frown upon such suggestions as disrespectful. (Earning this respect was not always easy: Dr. Pulaski, case in point.)

But actually, Data's brain has been directly "plugged" into the Enterprise computer and other computer systems many times in TNG, for various reasons. So it is not true actually that Data always has to "use" a computer manually in Star Trek. (See the nice screenshot in Einer's answer above.)

Furthermore, by interfacing with Locutus in "The Best of Both Worlds (part 2)", Data was able to input commands directly into the neural net of a Borg cube, forcing all of the Borg on board to enter their regeneration cycle. This demonstrates at least two types of interface at once: direct physical connection from Data's positronic brain to other devices (Locutus' Borg implants) and Data's connection, in turn, to the Borg Collective (a "wireless" connection, if you like, over subspace).

Also see: "A Fistful of Datas".

I also wish to explicitly counter the comment by TheSpooniest, made below the original question. Data was not "designed to function as a crew member". He was found by chance on Omicron Theta by Starfleet officers, and his own career in Starfleet came later.

One main reason is that the consoles on Federation Starships (and other non-federation starships) were designed with biological life in mind. Data was a uniquely created and discovered being, discovered long after the designs for the Galaxy class had been implemented across the Federation.

As a result, there are few viable situations for Data to directly interface with the ship's computers, except in either the robotics lab or engineering sections, which contain the specialised diagnostic components to allow electronic parts to interface.

If you look at the bridge of the Enterprise, you'll notice there's no way for Data to directly interface. It would likely involve removing the protective panels, getting out the correct cabling, and then wiring in. This would in turn impede Data's movement, making him less effective as a bridge officer. It'd also pose a trip hazard for other crew members, making it less effective overall.

Given so many computers on so many starships (older designs, notably, but also other races) use physical biological input, and Data has demonstrated an apt ability to type, recite verbal commands (Picard's passcode, for example) and even re-arrange computer chips at great speed, it makes more sense for him to use conventional means to access the systems, given direct access is unlikely to be a standard feature on most ships deployed by the Federation (nor would they retrofit their entire fleet to meet the needs of one android on one ship).

In-universe, the direct connection is only used when running diagnostics of Data's systems (i.e. in Engineering), or in one case where only his head was available during an emergency. So it stands to reason he's only directly connected in exceptional circumstances.

4
Does Data have Bluetooth or similar radio?
-1
Why does Data use a tricorder?
99
Which was the first novel set in universes where P=NP?
39
How can the Next Generation's unfamiliarity with the Borg be explained after Archer's encounter?
39
Why does the EMH use the computer?
9
Why do the Borg have physical computer interfaces?