Why does Data not notice the intruder?

In “Timescape,” Troi, Data, and La Forge beam over to the frozen Romulan ship to try to figure out what has gone wrong. While in the engine room, Geordi asks Data (with the Romulan imposter standing behind him) if the man has “always been here.” The imposter then proceeds to attack Geordi and put him into neurological shock.

Since Data has a photographic memory, why did he not immediately recognize that the Romulan’s presence was impossible to reconcile? After all, he had seen the engine room earlier and would have remembered the positions of all of the frozen individuals there.

Data may have total recall of events, but like any thinking being his brain must not only record information from his senses but also extract features from the raw data that are useful to him as he goes about his tasks. In order to not waste finite computational resources Data won't extract useless features such as how tall everyone in a room is, or ransack his memory to compute useless things, such as how many people scratched their nose in his presence since stardate 41738.6. The particular configuration of motionless Romulans scattered around an engine room might not rise to the level where discrepancies would be noticed, particularly since time had just rolled forward around forty seconds and then reversed again. Data is capable of noticing such details, but there has to be a reason for him to pay particular attention. Otherwise useful cognition would be drowned out by useless detail. Geordi seemed to notice the Romulan because the first time he was at a particular console he had to squeeze past the Romulan. The second time around the Romulan was in a less inconvenient place.

Investigating this question it seems Kyle Jones has the best answer and that out-of-universe it's sort of a plot-hole but, just for fun, some alternatives: Time continued to reverse during the commercial break so that Data may have expected that time was frozen at a different point than previously.

Let's break down the time points (the images at bottom may help).

It's clear that none of the Romulans are in the same position from 6 (re-freeze) to 9 (Away Team re-enters the main compartment). Out-of-universe we'd simply say this is a poor edit (or poor continuity). However, in-universe we could say that there was, in fact, another time reversal during the unseen break (or time continued to reverse so slowly as to be imperceptible).

When La Forge is grabbed, it appears it is supposed to be the same time point as the initial transport, in which case it seems likely all of them should have noticed such a blatant change. They didn't though.

Some even more outlandish alternatives might be: (a) the subspace time disturbance for interfered with Data's positronic matrix so he didn't notice the very obvious additional Romulan or (b) Data's observational programming was unable to cope with the idea of time moving in reverse so it didn't automatically equate the first environment should correlate with the second environment (he would have had to "consciously" correlate the previously viewed scene with the current scene).

A. Shortly after transporting over to the Romulan vessel's engineering section: 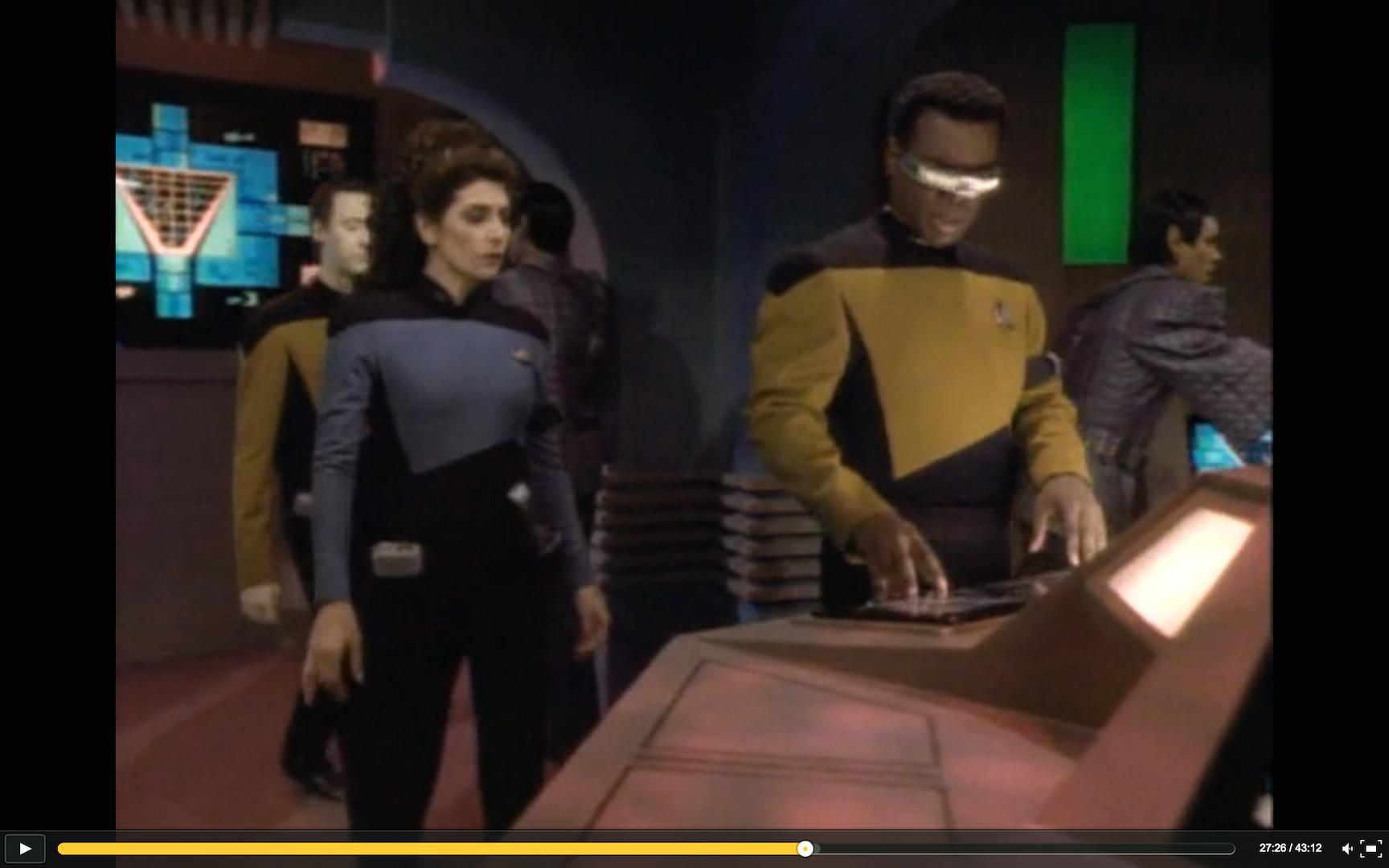 B. Shortly after that (you can clearly see the 3 Romulans obviously present): 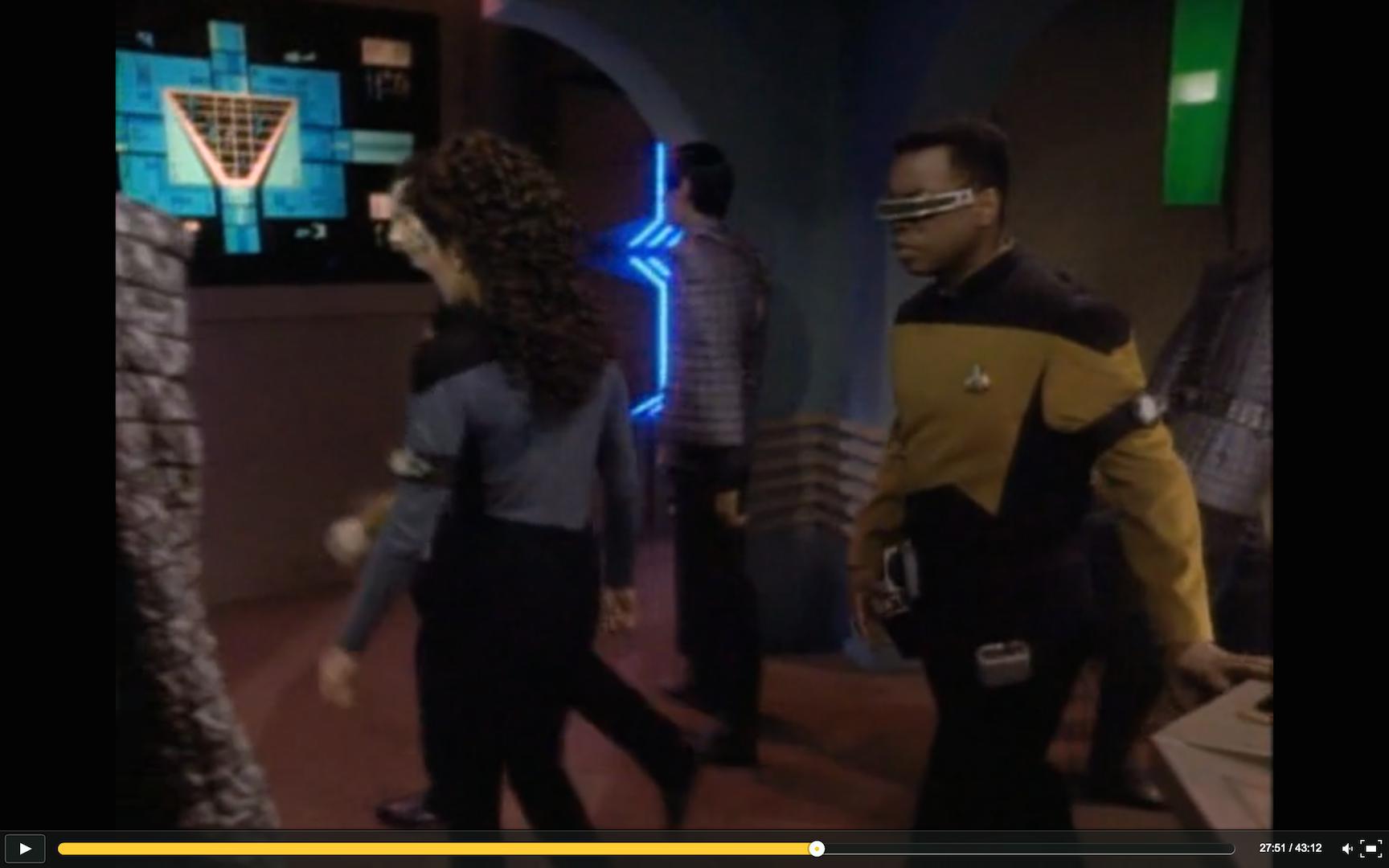 C. The moment time re-freezes, after time moved forward and reversed (just before the commercial blackout): 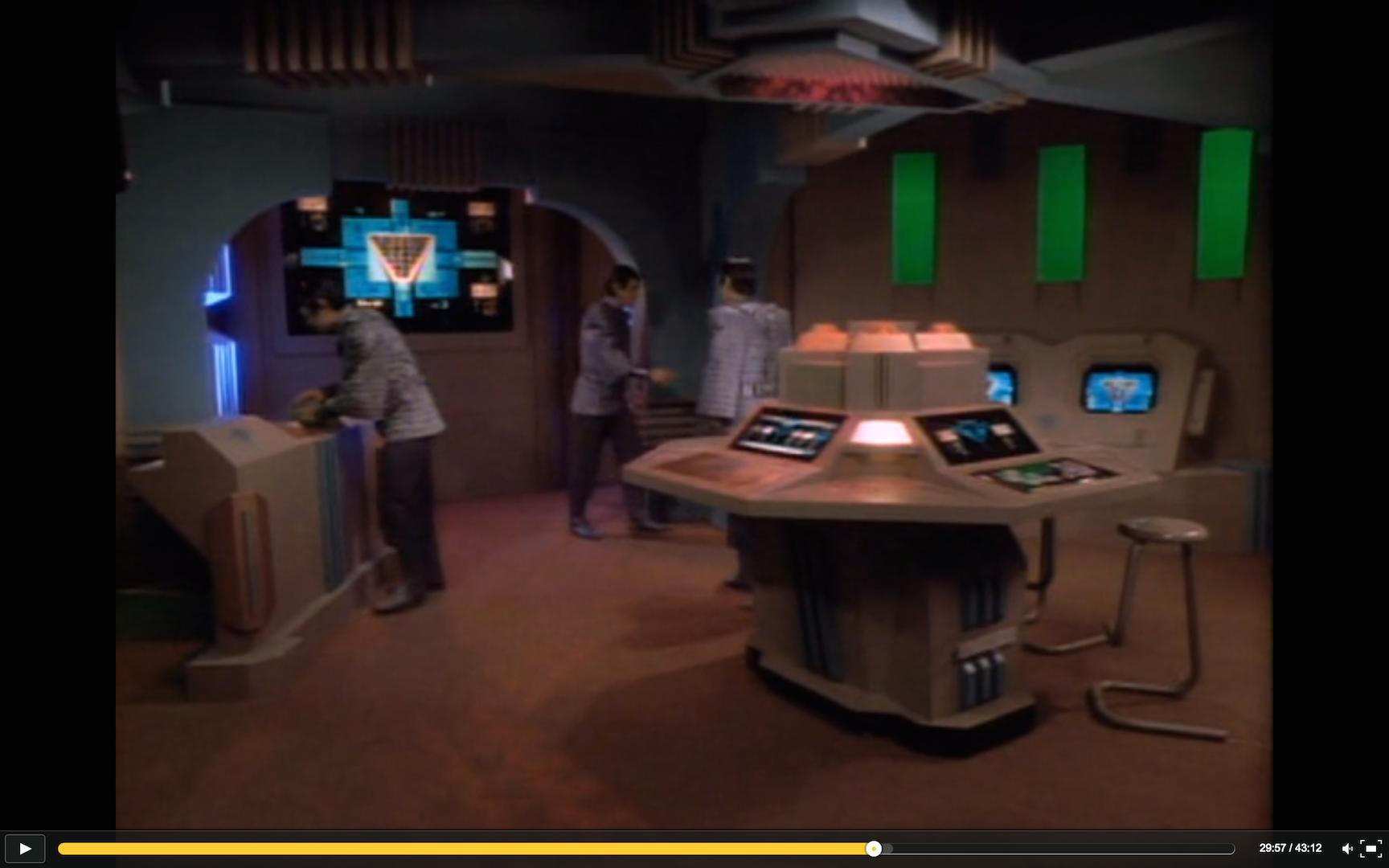 D. After the commercial break, they've left the singularity (after a short conversation with Captain Picard) and returned to Engineering where La Forge approaches the console: 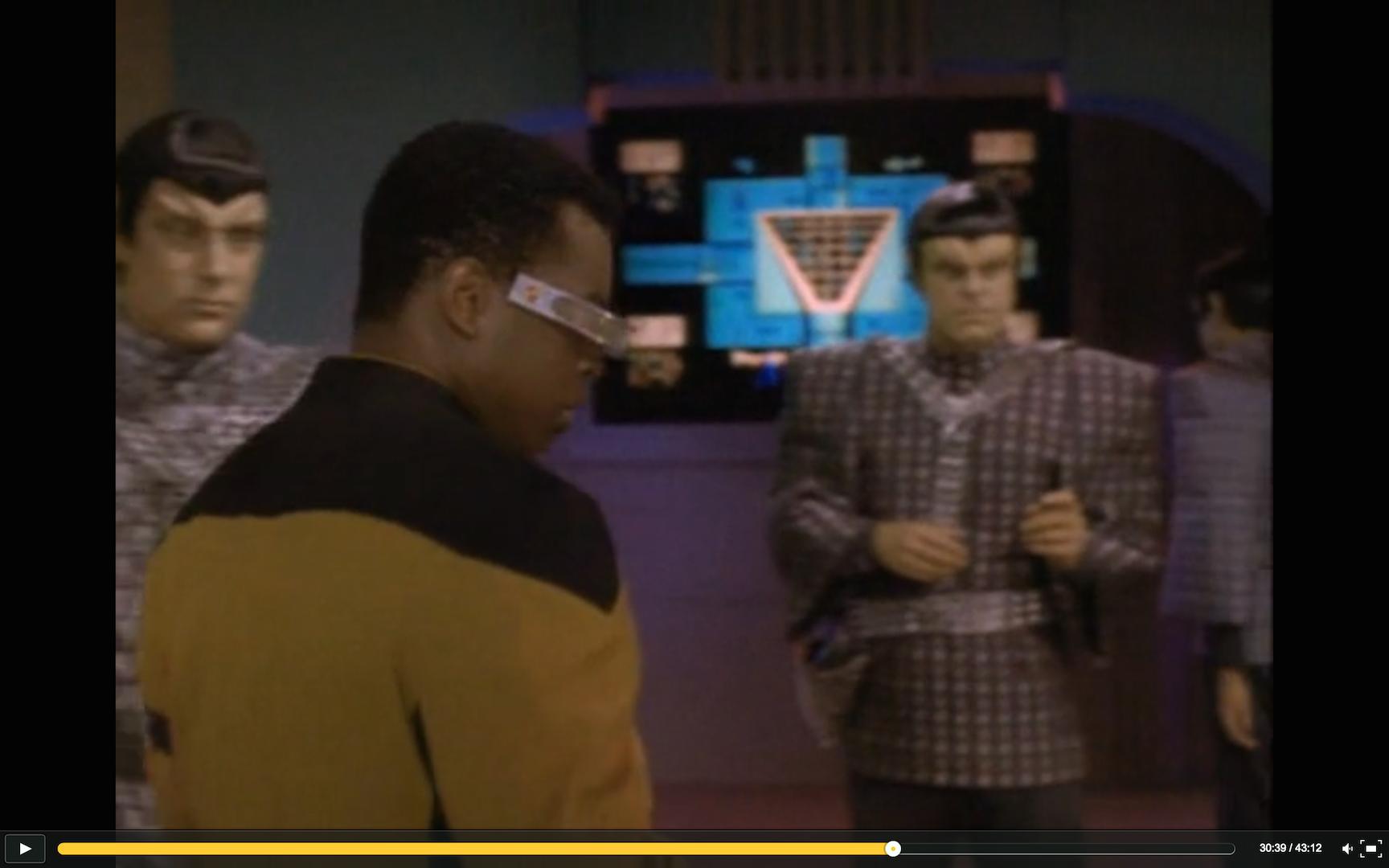 E. Right after La Forge and the alien fall to the floor. The position of the other Romulans seems nearly identical to their position right after initial transport: 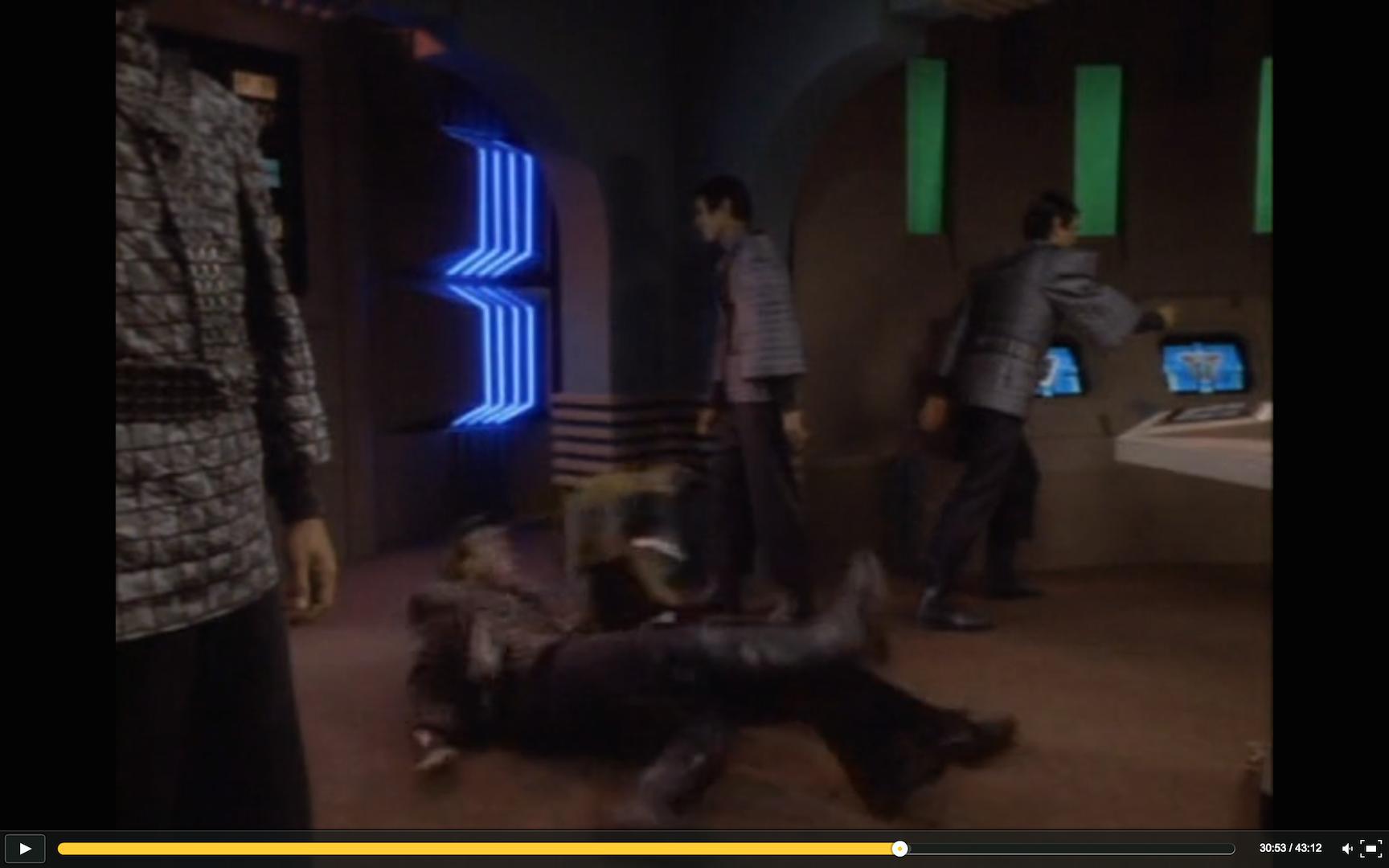