Why was this item left relatively unguarded on a barren planet?

In Guardians of the Galaxy, I couldn't help but notice that

left unguarded on a deserted planet?

There seemed to have been life on the planet at one point (as revealed by Star-Lord's projection equipment), but by the time Star-Lord arrives all signs of life are largely gone, except for the few rats that he kicks. Moreover, the only environmental dangers shown in the movie were huge geysers. Therefore it's safe to say the stone was guarded neither by the environment nor by a society or anything remotely sentient. Since the gem was a source of infinite power, surely someone would've taken it in the time since the prior civilization was destroyed.

The time span was definitely large because the level of destruction on the planet could be caused either by time and natural entropy, or by

but not the one already stored in the force field. But even if a separate stone did destroy the planet, there was still enough time between destruction and Star-Lord's arrival for the evolution of primitive rats to occur from a planet that was wiped of all life.

Why was the stone even there when Star-Lord arrived? It was obviously sought after by the Kree/Nova antique dealer so its whereabouts were known. Why did no one else take the stone?

It is impossible to determine why the Infinity Stone was found on the abandoned world Star-Lord picks it up from. Finding lost or forgotten Infinity gems has a precedence in the canon Marvel Universe. In the comics, Thanos finds one of the gems forgotten because its possessor could not use it. 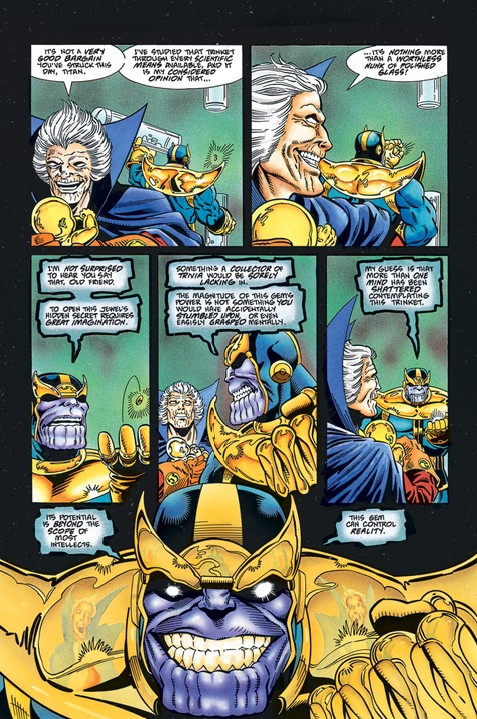 Scene from Thanos Quest #2 (1990), Thanos trades the Runner (another Elder of the Universe) to the Collector for the Reality Gem.

Several of the premises you present are problematic and aren't answered in the movie or in the comic source material. We know the stone is encased because it can't be casually handled. With a sophisticated locking mechanism, it may appear to be nothing more than a beautiful and cunningly-crafted artifact.

As to the Infinity Stone being on the planet in the first place, I posit any combination of these things:

Because the stone was under water and inaccessible until that moment.

Every 300 years, the sea lowers and the Temple Vault, an ancient structure hidden deep beneath the waves, is made accessible. It is here that the Orb was located.

So basically everyone was waiting for the moment when the stone would be accessible and that is also why everybody found the stone at the same time.

From the Guardians of the Galaxy blu-ray commentary:

So this ancient planet Morag had a pretty advanced civilization, and it was destroyed probably through some sort of global warming, and is covered by oceans, but the oceans recede every 300 years. And, so, Peter Quill has been waiting for this time to go and get this Orb. And Yondu found out about it from The Broker. - James Gunn

So, we've established that the world in question, at least the site of the temple, is completely covered in water for 300 years at a time. That doesn't necessarily mean that inside of the site is submerged, but that the entrance is. It's entirely possible, due to various natural (as could happen on earth) reasons, that the entire cavern or temple or however you would describe it is not constantly submerged during some or all of those 300 years. That would explain the presence of non-aquatic life forms.

Assuming these things to be true, it would make sense that if multiple parties knew of the existence and whereabouts of the gem, that they would also arrive at its location at generally the same time given they only have a limited time to acquire it. Quill was almost certainly unaware of what he was retrieving (and honestly, I'm not sure who it actually was who sent him to get it), but Thanos knew what he himself was after. So, I don't think the question is why was it left unguarded, but why was it left there and how was it located by multiple parties.

7
Is Jane Foster superhuman?
18
Why was Drax in the Kyln?
11
How does Thanos know what size slot is needed to hold each Infinity Stone?
4
Was Titan II always unguarded?
3
Why didn't Vision defend himself against Thanos?
2
Is there a specific rule for a socketed Infinity Stone's weapon to be able to unleash the power of the stone?
6
Why was Ultron able to kill this character so easily?