An answer about the Star Wars timeline, uses the appearance of E.T.-like creatures in the Star Wars universe as a frame of reference for dating the sagas relative to our present day.

I remember noticing, and discussing the E.T.-like creatures when I saw the film, too, but is there an in-universe explanation for this, or an in-universe tying of the two stories?

Or is it just a cute Hollywood nod on the part of Star Wars to the E.T. franchise?

TL;DR answer: Yes. As a gag/easter egg/cross-merchandizing/friendly jest/whatever, Spielberg and Lucas have placed enough canon information in their universes to imply that E.T. really is an alien from a species in a Star Wars Galaxy.

The two directors (Spielberg and Lucas) went to film school together (Where they made THX 1138). Since they knew each other and have worked together in the past it is also very plausible they collaborated with each other about E.T. being part of Star Wars.

E.T.'s species were officially called The Children of the Green Planet, their planet was called Brodo Asogi

Background on the cross-over history:

The Children of the Green Planet are a cameo appearance of the famous aliens of Steven Spielberg's 1982 film E.T. the Extra-Terrestrial. These creatures were inserted in the movie to make good on a promise—after Steven Spielberg included a Yoda cameo and Star Wars toys in E.T., George Lucas promised to include an E.T. cameo in the next Star Wars film he made — The Phantom Menace.

Note: in this answer, any quotes are from Wikia article linked above, slightly reworded and improved.

In "Star Wars Episode I: The Phantom Menace", in the Galactic Senate, we see the image of the senators from Brogo Asogi (not named in the movie) - who look 100% like E.T: 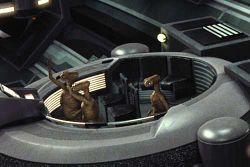 First, the "easter egg - Star Wars in ET" that started the whole crossover:

When E.T. goes trick-or-treating with the children, he spots a child in a Yoda mask and begins to follow that child saying "Home… home…" (Composer John Williams included a snippet of his "Yoda Theme" from The Empire Strikes Back to accompany this scene.). This could be interpreted as E.T. recognizing a familiar species from his home galaxy.

HoloNet News Vol. 531 50 also mentions that Senator Grebleips of Brodo Asogi funded an expedition to another galaxy. This is another reference to E.T., since E.T. visits Earth from another galaxy in the film.

*Several people have made mention of the fact that 'Grebleips' is 'Spielberg' spelled backwards, as another related easter-egg.

To expand upon DVK's excellent answer, I have found a source that confirms that the species shown in TPM are, in fact, the same species as in E.T.: an interview with George Lucas himself (emphasis mine):

A greeting and suggestion from Denmark. In The Phantom Menace, there is a cameo appearance in one of the senate chamber boxes, by some of the E.T.'s. As in Steven Spielberg's E.T.: The Extraterrestrial movie. Since they must be an established race in the Star Wars universe, there wouldn't be anything wrong in having them in another cameo role(s), either in the new Star Wars TV series or in future films. With Spielberg's acceptance, of course. Since they are a race devoted to science and exploration, they could easily fit into the known Star Wars universe.

George Lucas: The problem is that the E.T. design is owned by Universal Studios. Steven and Universal let me show the E.T.'s for a fraction of a second, but we wouldn't actually ever use them in one of the upcoming Star Wars TV shows or the future films. We have plenty of new types of aliens to reveal and don't need to give any further screen time to E.T.'s species.

The evidence for ET and Star Wars sharing a universe is far from conclusive.

Going by strictly canon material from the movies, all we have is a picture of aliens that resemble ET from the waist up, which DVK provided a picture of.

We don't know that they resemble ET in full or that even if they do, they are in fact the same species. It would be easy to mistake a Centari for example for a Human.

Most of the evidence for them being in the same universe comes from the extended universe or non-canon work. For example, Senator Grebleips funding a trip to another galaxy does not necessarily have anything to do with the trip made by ET.

There are enough points there that you can link things together and draw a somewhat reasonable conclusion that ET and Star Wars may share a universe.

On the other hand, a clear example of a mask of Yoda is seen in E.T. This could void any theory on sharing a universe, but could also simply be an easter egg to help viewers make the connection. 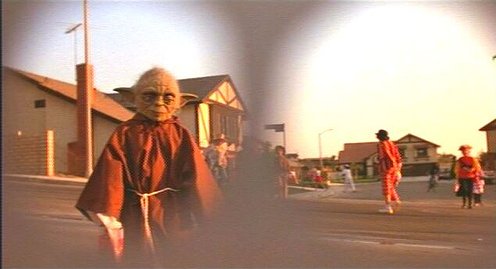 This means that any similarities between ET and an alien race in the Star Wars galaxy is just a coincidence. Star Wars is firmly fiction within the ET universe, so cannot by definition share the same universe.

3
Are the ET like aliens seen in Star Wars Episode 1 ever explicitly named "Brodo Asogi" in canon?
3
What species other than humans and E.T.s managed to survive from the galaxy far far away until E.T. the Extraterrestrial was released?
1
Is E.T's Visit To Earth Considered Canon?
35
What was the first fantasy world/universe without real-world ties?
51
Are any ships in Star Wars capable of intergalactic travel?
32
Is there a difference between a parallel universe and an alternate universe?
37
Is "My Little Pony: Friendship is Magic" canon with Star Trek?
33
Has any reference been made to Earth or the Milky Way in Star Wars EU?
30
Was E.T. a Jedi?
23
Are Star Wars and Indiana Jones in the same galaxy, far, far away?
See more linked questions