What is the flash of light produced when the Enterprise goes into warp? Why don't other ships produce the same effect?

What is the flash of light produced when the Enterprise-D goes into warp? I guess it's the ship entering subspace, but I'm not sure. Also, why don't Ferengi, Romulan, and other non-Federation ships produce this light? 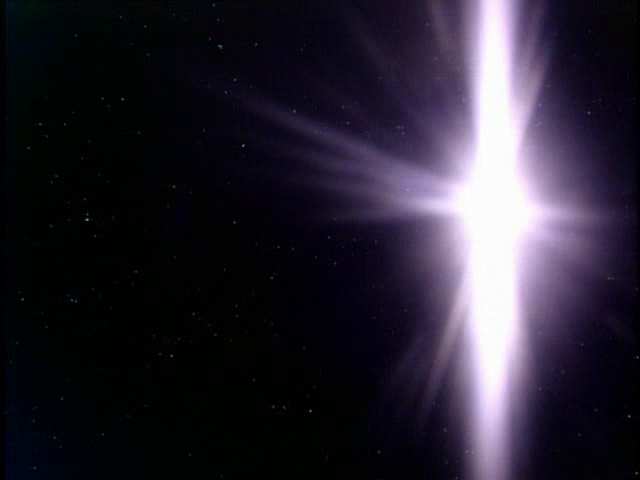 Although it's not explicitly stated elsewhere, the flash of light you see when a ship enters warp appears to be something called a "polyluminous burst".

In the Voyager episode Night, Tuvok used a photon torpedo's warp engine to deliberately create (and maximise) this flash:

TUVOK: ...Do we have the power to launch a photon torpedo?

KIM: Maybe one, why?

TUVOK: Perhaps we could shed some light on our predicament. I'm reconfiguring the torpedo to emit a sustained polyluminous burst.

Since photon torpedoes are known to have Warp Sustainer engines (basically little tiny warp engines), it seems likely that this is how Tuvok is able to reconfigure it so easily from his command console. He simply ordered it to go to warp but in a way that maximised the 'flash', obviously at the cost of the torpedo itself. 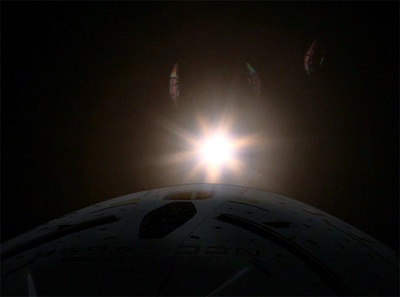 Further investigation would suggest that pretty much all alien ships also emit the same flash (albeit with their characteristic colouration) as shown in this footage from TNG and Voyager.

Out of universe, the reason is slightly more disappointing. The flash covers the transition from a static model (which could be filmed simply moving a camera away from the model) to a dynamic effects-based model

"One of the reasons that flash occurs in the opening credits when the ship goes into warp is because we switched from the six-foot model to the two-foot model. We used the two-foot model for the stretch effect, and the six-foot model for the fly-by. Well, they didn't quite match, so that's why the flash is there – to cover the fact that when we're switching from one model to the other, we kind of used it to cover the discrepancies between the two models." (Star Trek Generations (novel) (hardback), pp. 271-272)

There's an extensive discussion of the effect itself here.

It's just excessively prominent in the TNG opening credits due to differences in rendering the special effects.

Spock's World at one point indicates that all starships generate a flash of light on both entry and exit from warp. This light is said specifically to be Čerenkov radiation, i.e. the electromagnetic analogue of a sonic boom. However, the book implies that starships don't generate Čerenkov radiation continuously during FTL travel, because they are in an "otherspace" (the word "subspace" was not used) for most of the journey; it is only the transition to or from warp that "drags superrelativistic particles" (presumably some sort of tachyon) into normal space, and it's those particles that emit Čerenkov radiation.

No one paid much attention to the view out the windows while a ship was in warp. The otherspace in which Enterprise traveled at such times ...

... So they saw what not too many people have an opportunity to see—a starship decelerating hard from warp, the point of a silver spear piercing through from the far side of the darkness in a trailing storm-cone of rainbows, as Coromandel came out of warp in a splendor of Cherenkov radiation from the superrelativistic particles she dragged into real-space with her...

... Coromandel accelerated away on impulse, then flung a cloak of spectrum-colored fire about herself, leaped away, and was gone from sight on the instant.

Caveat 1: The book only shows this happening with Federation starships, but it's my impression that all of the starfaring cultures at roughly the Federation's tech level are using substantially the same FTL technology (for instance, it's universally referred to as "warp drive" as far as I know, and ships of different navies can encounter each other at FTL velocities) so I'd be inclined to assume it applies across the board in the absence of evidence to the contrary.

Caveat 2: Spock's World is an official tie-in novel, but not an adaptation of a TV episode or movie, so this is probably not 100% canonical; I don't know exactly how that works. However, I doubt a more detailed in-universe explanation is available.

In Enterprise, Season 2, Episode 16, when the Tholian ships go to warp, they produce similar flashes (although differently colored). This happens around 38:54 into the show (Netflix timing) 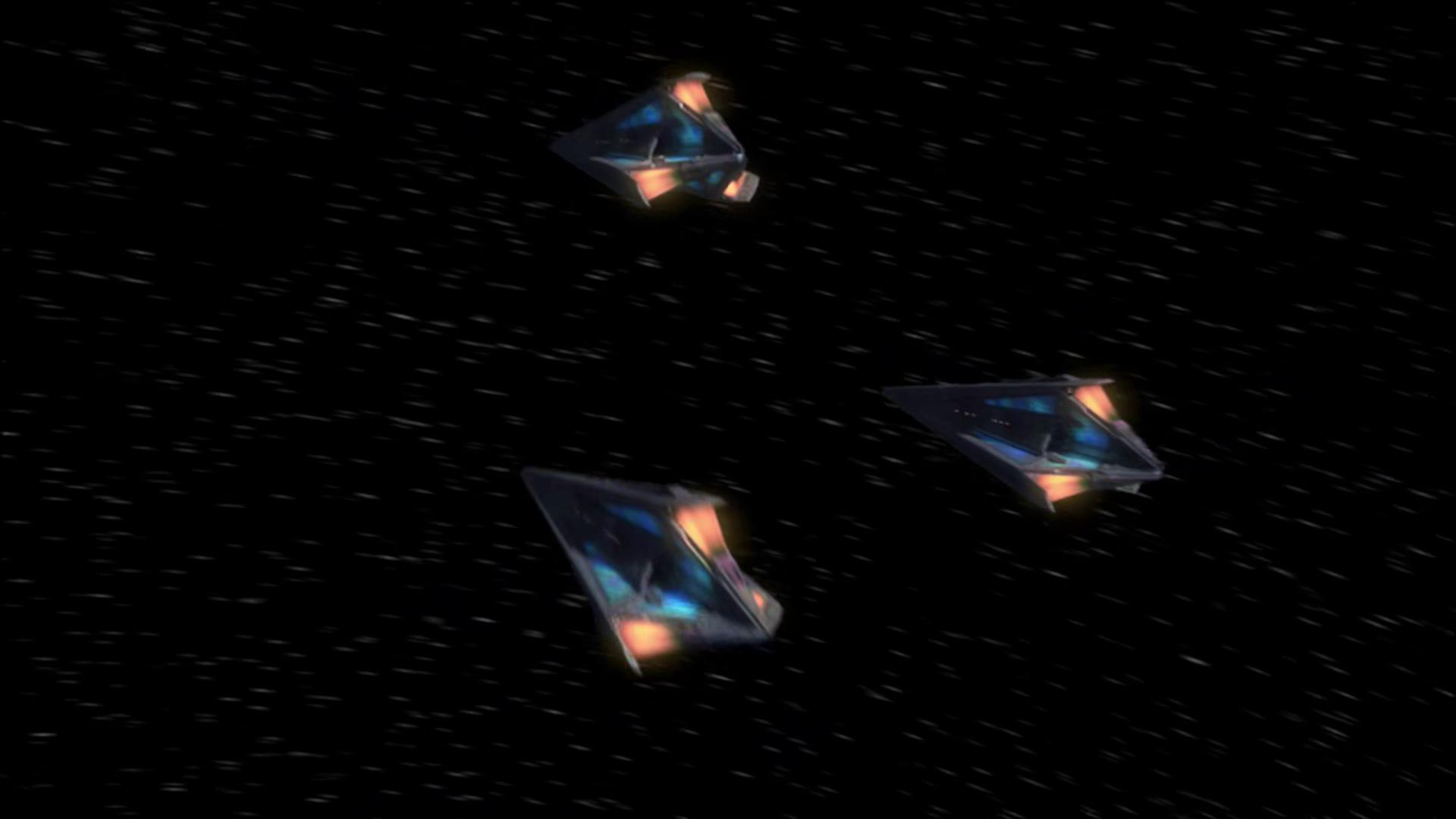 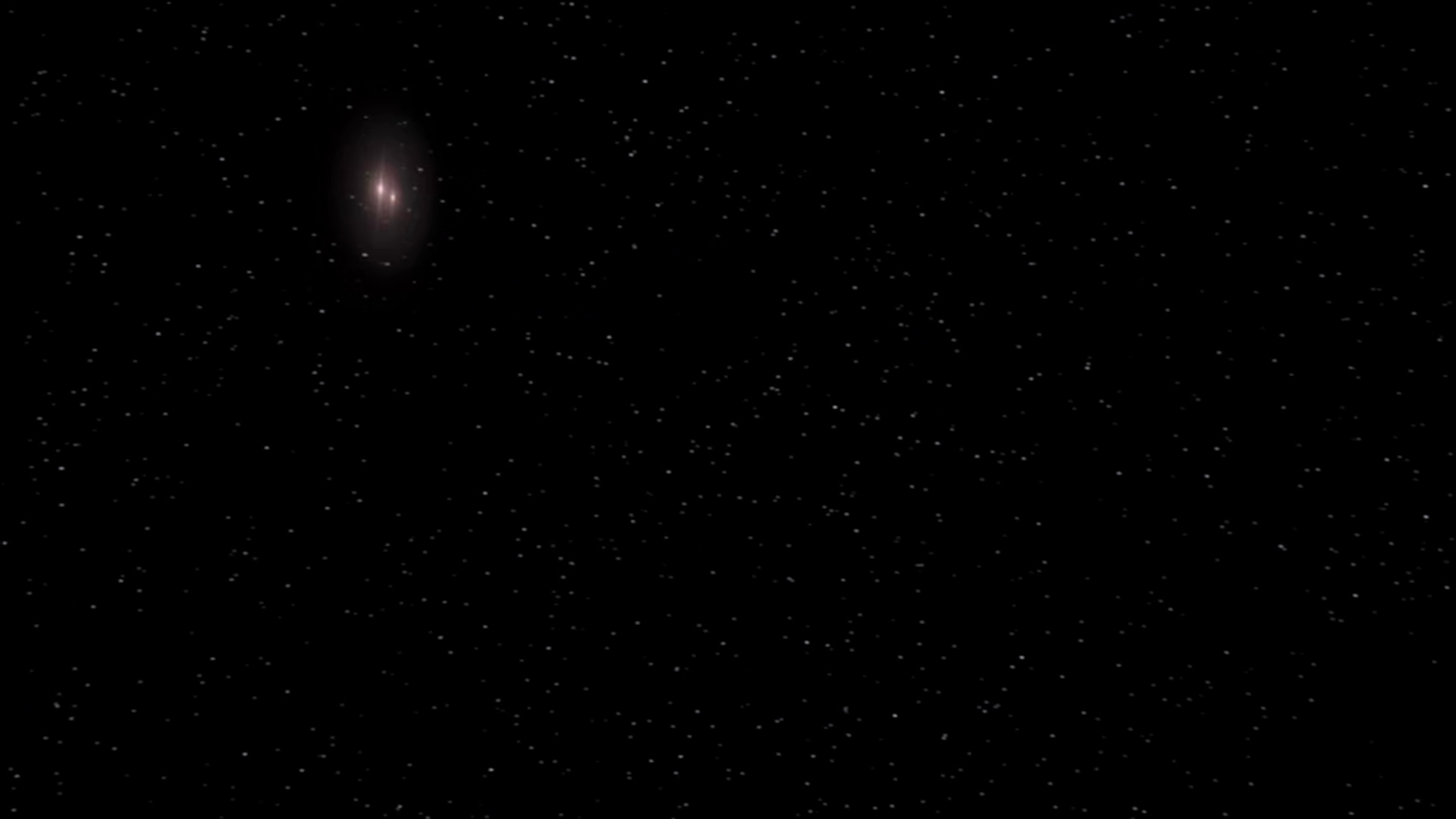 I've always seen it as a light barrier equivalent of the sonic boom when a craft crosses the sound [speed] barrier.

I can't think of how else to explain it. Other ships don't not doing it seems to me like artistic license.

The polyluminous burst is to warp speed what the sound barrier is to Mach speed. It's a visual burst that signifies an object has moved from subluminal to superluminal speeds.

So why do we not always see one when an object goes to warp? As it happens -- not all warp drives are created equal! (or at least, not all warp drives are depicted equally) The warp effect has not been consistently depicted throughout the series - even within TNG-inspired spinoffs. Here's a brief revue of the various ways the Enterprise (and a handful of other ships) have been shown going to warp over the last few decades.

Ships in TOS-era movies don't really 'stretch and boom' like TNG ships; their warp drive mainly consists of showing that any light-producing sources on the ship leave afterimages as the ship moves. Meanwhile, TNG typically shows the 'stretch and boom' effect, probably visually suggesting that whole squishy-squashy Alcubierre effect that people are fond of pointing to when dealing with "real" superluminal travel. Nemesis is an odd duck here; Enterprise-E apparently no longer needs to stretch before running, instead emitting twin smoke trails with an initial puff before creating a light burst.

But even within TNG, there are instances of ships playing by different rules. Take a look at the opening shot of Redemption, Part II:

The Klingon ship apparently uses the old TOS-movie era light-trail effect. Now, the scene itself leaves a lot to try to discern -- but I believe this is an indicator of older technology at work. Indeed the Klingons are not usually known for their warp drive innovations, so it's somewhat believable that they prefer to employ the same ancient junk. (this would render Birds of Prey as way, way slower than TNG era craft - though it's not really hinted at onscreen, old warp was the cube of the warp factor times c whereas TNG era warp speeds are the warp factor to the power of 10/3 times c. this would make a BoP laughably sluggish at high warp speeds!)

Additionally there's a moment where the Borg cube from Best of Both Worlds Part 2 jumps to warp speed. The cube doesn't stretch or create a burst or leave a light-trail or anything, really -- but then again, it's only onscreen for a second.

So what does it all mean?

The only real constant is change with the warp effect. Given the majority of the visual cues as being "era-specific" - TOS looks a certain way, TNG looks another, and JJ-verse looks like a trip through slipstream from Gene Roddenberry's Andromeda - really the only thing worth taking away from it is that it can (somewhat) point to the craft's make, model, and year of manufacture.

A thought... could it be the relativistic passage of time (us not moving versus the ship moving at and beyond light speed. Would photons reflected off the ship be occurring over a longer period of time (again to us) the faster it travels? They would not slow down as they always travel at the speed of light, so there would be a lot more of them. A friggin' lot of them when the ship hits light speed, hence the massive flash.

It's a rendering gimmick to give the effect more snap. It catches the viewer's eye and engages them to the show. It aids in the suspension of disbelief. More engaged viewers, more advertising viewed, more revenue. They do it for the exact same reason Seven of Nine was added to Voyager.

If you want physics: It imparts momentum on the cash in your pocket toward the studio's coffers.

45
Why aren't Federation ships built with two warp cores?
23
Who is bound to the Prime Directive?
9
Has the Enterprise-D really travelled twice as much as other Federation ships?
6
What happened to the rest of the crew from Enterprise-C?
2
Could a starship's impulse engine reactor produce enough energy to power the warp drive?
12
Has there ever been a warp / non-warp collision?
31
Why are Starfleet vessels designed with nacelles so far away from the hull?
2
Is it likely that the Nexus can destroy any ship in the Star Trek Universe?
4
Where are the warp nacelles on the new Romulan ships in Picard and the Klingon Birds of Prey seen throughout the series?
10
How did Lt. Stiles know that Romulan ships are painted with a bird of prey?