How does Grevious get his first lightsaber?

I understand that he takes them as trophies from defeated opponents, but how does he get his first one? Does he defeat a Jedi without a lightsaber? If so, who? Or is he given one by a Sith? Or does he make his own (without force assistance)?

According to Wookieepedia, Count Dooku presented him his first lightsaber:

The cyborg project was funded by San Hill to create a military leader that could counter Dooku's growing political influence in the Separatist Movement, although he presented the finished General Grievous as a twisted gift to Dooku. Though taken aback by his appearance, Dooku was pleased, and bestowed upon Grievous the title "Supreme Commander of the Droid Armies," planning to use him in his efforts to conquer the Republic. He presented him with his first lightsaber, the weapon of Sifo-Dyas, an old friend of Dooku's.

This information comes from 14-page comic The Eyes of Revolution, from Star Wars: Visionaries, in which a fully cybonic "Sheelal", wounded and mind tempered with, receives his first lightsaber from Dooku (reporting to Darth Sidious) and, after reacting with anger and violence at being called a "droid", announces himself to be General Grevious. 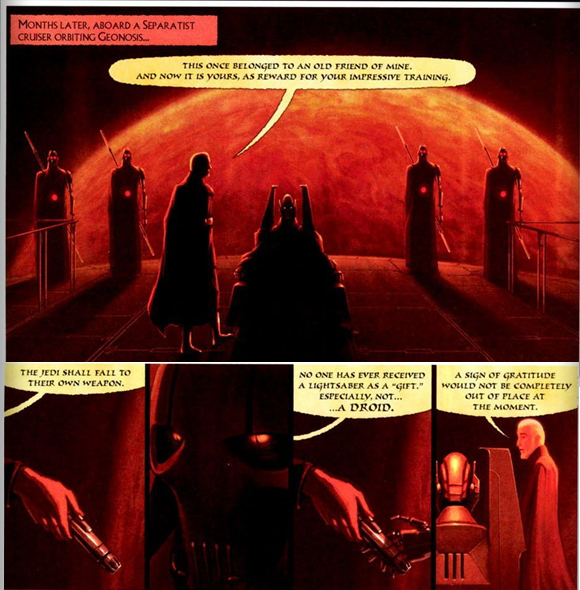 Grevious gained his first Lightsaber after killing a Jedi. The Muk were invading his planet and he became a master with a gun, he met a female of his race, the Kaleesh. When she was killed he changed his name to Grevious from Qymaen Jai Sheelal.

Then the Jedi became involved in this fight and took the side of the Muk, since the Kaleesh had invaded the Muk's home planet. The Jedi forced the Kaleesh back and basically stopped them from leaving their planet. Since Grevious was not on his planet at the time, he hurried back as his planet was being invaded by The Muk again. This time, the Jedi were helping the Kaleesh. Grevious didn't know this and killed the first Jedi He saw. He spotted the Lightsaber and took it.

Not the answer you're looking for? Browse other questions tagged star-wars lightsaber general-grievous or ask your own question.

31
How do Jedi (and Sith) practice lightsaber duelling safely?
28
Why did Luke use a synthetic crystal in his lightsaber and what were the implications of this choice?
9
Are the Sith always trained in lightsaber combat?
1
Are young Jedi more in tune with the Force than Sith and older Jedi?
47
How is it possible to do round swings with a lightsaber?
9
Who taught Kylo Ren to bleed his lightsaber?
12
How many lightsabers does General Grievous have?
4
How did Savage Opress obtain his lightsaber?
10
How did Luke get his lightsaber back from Raynar Thul?