After giving a look at Dark Tower's world maps and reading "Wizard and Glass" I wonder:

Because if you read "Wizard and Glass" you will see all people referring Mejis toward WEST. When Jonas catches Roland, he said Jonas was banned to WEST, lives and will die there. But in all maps Mejis is at EAST (or SOUTH in some others).

Just after set CIT-GO on fire, is some reference to smoke, wind and direction too.

Roland passes his test and is sent East to Mejis as a gunslinger with Alain and Cuthbert; not West.

As @Magno C quotes in the comments:

She closed her eyes as if struck, drew in a breath, let it out, opened her eyes again. "Bad," she said, "yet maybe not as bad as I thought. And if thee doesn't come back? Sheemie and I go west, as thee said before?"

"Aye, to Gilead. There'll be a place of safety and respect for you there, dear, no matter what . . . but it's especially important that you go if you don't hear the tankers explode. Thee knows that, doesn't thee?"

You are correct Jonas was "sent West" for failing his test; but that doesn't mean he has to stay in the West.

If the apprentice fails his test, he is "sent West" out of the courtyard the same way he came in. If he passes, he is "sent East" and allowed to exit the East end as a gunslinger.

TL;DR - no, those maps are not correct, and are not "official".

There isn't a comprehensive canonical map of All-World, but the closest we can get may be Bev Vincent's map from his book The Dark Tower Companion: 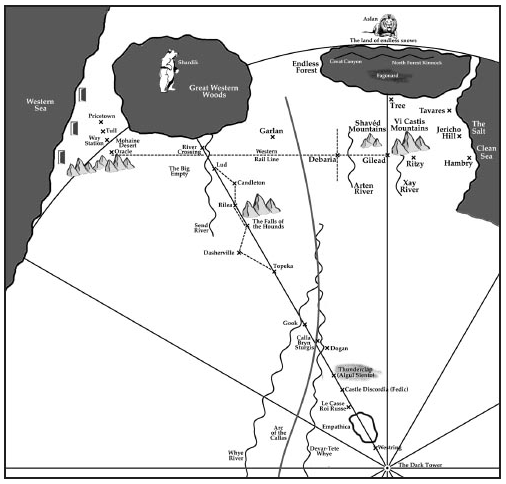 However, Vincent admits that even this map is partially unreliable:

NOTES CONCERNING THE MAP OF MID-WORLD:

This map assembles the known geography of Mid-World. Few distances are known, so the scale is arbitrary and probably wildly different in different parts of the map.

For a long time, the relative placement of Gilead was unknown, but in The Wind Through the Keyhole we learn that Tree is on or near the Beam of the Lion that ends in the north, and that Tree is north of Gilead.

After Roland saves the Beams, he believes that Shardik’s Beam has snapped into an eastward direction, which might lead one to assume it was the one that begins in the ten o’clock position. However, we also learn that the Western Rail Line used to run from Gilead through Debaria all the way to the Mohaine Desert. This is possible only if the Mohaine, which is south of Shardik’s Beam, is relatively far north. Closer to eleven o’clock than ten o’clock, in other words. This also means that Roland crossed only one Path of the Beam before reaching Tull, and not two. How he ended up near the Western Sea without reaching it before he visited Pricetown is another mystery.

There are other issues. According to Roland, the Western Sea used to be only a thousand miles from Gilead. We have only his word on this point, and there’s a lot about Mid-World that he doesn’t know. The distance from Lud to Topeka is around eight thousand miles, and this is only a segment of Shardik’s Beam. Mid-World has expanded a great deal if both pieces of data are accepted as fact.

We also know that the Arc of the Callas extends all the way to the region where the snow falls. That means Roland must have crossed it at some point. Perhaps the Callas are widely spaced and he went between them.

Garlan’s position on this map is arbitrary. It is to the west of Gilead and Debaria. But how far? No one knows. Presumably not near the Callas.

Here’s the bottom line: if you ever find yourself in Mid-World, you probably shouldn’t stake your life on this map, even if directions and distances are no longer drifting.
- The Dark Tower Companion: A Guide to Stephen King's Epic Fantasy

Still, this map does have a lot going for it: Vincent is probably the world's third greatest Dark Tower expert (after Stephen King and Robin Furth); Vincent interviewed King for his analyses of the Dark Tower; Vincent had the help of Robin Furth (King's research assistant, the author of the *Dark Tower comics, and the author of Dark Tower: The Complete Concordance) and Marsha DeFilippo (King's personal assistant); and so on. None of this means that Vincent's map is canonical or official, but it does mean that it is very likely to be the best anyone can do.

The map linked in your other question:

In the map you added in a link in an edit on your other question, there are many problems - for starters, it calls the entire place "Mid-World", when in fact, Mid-World is a region of All-World. Gilead, where Roland was born, is in "In-World". The Dark Tower books follow a course through Mid-World into "End-World". Also, Gilead, Mejis, Hambry, and several other locations are in the wrong places.

Not the answer you're looking for? Browse other questions tagged stephen-king the-dark-tower map or ask your own question.

7
Completion of Dark Tower series
17
The Dark Tower and existence
7
Dark Tower world map
4
Why didn't Eldred Jonas take Roland's guns?
2
Why did Roland wander away from the Dark Tower in "The Gunslinger"?
15
Reading order/reading plan for the wider Dark Tower universe?
2
What is the Real Scale of the Breath of the Wild Map?