70's to 90's werewolf horror novel, witch turns a boy's brother into a werewolf who eventually kills her but keeps her corpse as he loved her

This was a book I'd found on my brother's shelf, and he's quite a bit older than me. We narrowed it down to probably being a book from the 70's or 80's.

I only remember a few scenes of this book, and countless Google searches using them have turned up nothing. The last time I read this book had to have been about seven or eight years ago.

It's very disjointed, but I've been looking for years on the internet to try and find this book myself, but have had no luck. 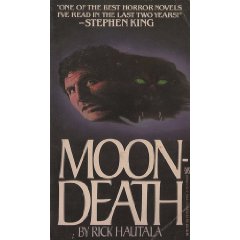 Not the answer you're looking for? Browse other questions tagged story-identification novel horror werewolf or ask your own question.

5
Looking for short horror story about graveyard and family of ghouls
6
Novel about a high school student werewolf meeting a girl (Elise) who becomes a vampire
7
Book: Young man attacked by wild animal (bear?) and rescued by shifted werewolf-woman (princess?), changed to be rescued, existing betrothal
3
Book about boy with the genetic ability to see present and past timelines of living things as color
2
Novel about a woman who wakes up turned into a robot with no memory of her past life