How do we know that the First Doctor was indeed the first?

How do we know that the First Doctor portrayed by William Hartnell was indeed the first Doctor, and not a reincarnation of a previous one, that for example the Doctor wanted to forget (something already seen with the War Doctor), and that's why he never talks about it?

Was this fact (that the first was actually the first) actually explicitly stated anywhere during the show, or it was only implied (like when talking about the number of reincarnations the Doctor already had) during the course of the show? When was the first time this was stated?

There have been a few instances on the show that seem to indicate he was the first. The Third Doctor story "The Three Doctors" (transcript here), in which the Third met up with the Second and First, has the Time Lord President tell an underling to "Show me the earliest Doctor", after which they cut to a shot of William Hartnell's First Doctor. The Fourth Doctor story "The Deadly Assassin" established that Time Lords can only regenerate twelve times (so they can only have thirteen bodies over the course of their lives), and in the Fifth Doctor story "Mawdryn Undead" (transcript here), the Fifth Doctor says "I can only regenerate twelve times. I have already done so four times." So, if he's telling the truth this would indicate the first five Doctors seen on TV really are his first five incarnations.

A little later in the Fifth Doctor's run there was "The Five Doctors", and from the transcript here, there was this exchange where the First Doctor met the Fifth:

SUSAN: Is he really

DOCTOR 1: Goodness me! So, there are five of me now!

Shortly after this, the First Doctor introduced himself to the Fifth Doctor's companion Tegan by saying "As it happens, I am the Doctor. The original, you might say."

That said, a possible element of doubt is introduced in the Fourth Doctor story "The Brain of Morbius" (transcript here), in which the Doctor challenges the evil Time Lord Morbius (who has been reduced to a brain controlling a Frankenstein-like body) to a "mind-bending contest", which the Doctor describes to his companion Sarah Jane as "Time Lord wrestling". Once they are strapped into the machine, they seem to have a mental battle which involves pushing back through one another's previous regenerations, and there is a sequence that seems to show versions of the Doctor before William Hartnell's "first":

Fans commonly suggest that the faces shown in this sequence were actually Morbius' earlier regenerations, and it's shot in a somewhat ambiguous way so I think this is a perfectly acceptable retcon given how much other evidence there is from other episodes that William Hartnell's Doctor was really the first. But several people involved in the production of the episode have indicated that their intent was that these faces were earlier regenerations of the Doctor, as discussed on this page:

The answer to which Time Lord these extra faces belongs rests in the production team. When questioned directly about who owns the faces writer Terrance Dicks answered, "I have no idea who the faces in the mind battle were. You would have to ask [co-writer] Bob [Holmes]." [9] The answer is instead revealed in an interview with producer Philip Hinchcliffe who commented on the mindbending sequence, "We worked out what period we wanted each image of the Doctor."[10] It was production team members that were dressed in period costumes to be the Doctor in photographs used for the sequence. He also added more specifically:

We tried to get famous actors for the faces of the Doctor. But because no-one [sic] would volunteer, we had to use 'backroom boys.' And it is true to say that I attempted to imply that William Hartnell was not the first Doctor.[11]

Hinchcliffe echoed this concept in yet another interview adding, "There was no subversion of the mythology of the series intended, but I just reasoned that it was entirely possible that William Hartnell may not have been the first Doctor Who. So yes, as far as Bob [Holmes] and I were concerned, the other faces were meant to be past Doctors."[12] Robert Holmes, the script editor for the show when the story was made, also supports this as the production teams intention:

'[The Doctor] is mortal, and has only so many regenerations,' he commented in later years. 'We don't know which one Hartnell was, whether he was first or not. In the phantasmagoric scene where they are mind-wrestling, we see the Doctor forced back through a number of regenerations.'[13]

It is quite obvious that when the story was made, the faces on the screen during the mindbending contest were to represent the Doctor.

The "Myths" section of the wiki article on The Brain of Morbius lists some additional stories other than the ones I mentioned that have indicated that William Hartnell's Doctor was really the first:

The mindbending contest at the end of part four proves conclusively that the Doctor regenerated multiple times prior to William Hartnell's Doctor. While this was apparently what the production team intended to imply, the overwhelming weight of evidence offered throughout the rest of the series contradicts this. For instance, Time Lord dialogue in The Three Doctors specifically establishes that the Doctor as portrayed by William Hartnell is "the earliest Doctor"; further evidence provided in Mawdryn Undead, The Five Doctors, the 1996 TV movie, The Next Doctor, The Lodger, The Name of the Doctor, and The Time of the Doctor) (among others) establishes that all of the Doctor's incarnations are accounted for in his televised adventures.

The First Doctor continued to journey across the universe even after Susan had remained on Earth and Ian and Barbara had returned to London. A pattern had been set. This mysterious traveller could arrive at any point in time and space in his battered blue box and two things were certain. He was bound to find injustice and he was sure to fight it! But following his first battle against the Cybermen, the ageing process finally caught up with him and he reflected, ‘…this old body of mine is wearing a bit thin.’

The Doctor was about to regenerate for the very first time. The change signalled the end of the First Doctor, but as he himself noted, ‘It's far from being all over... 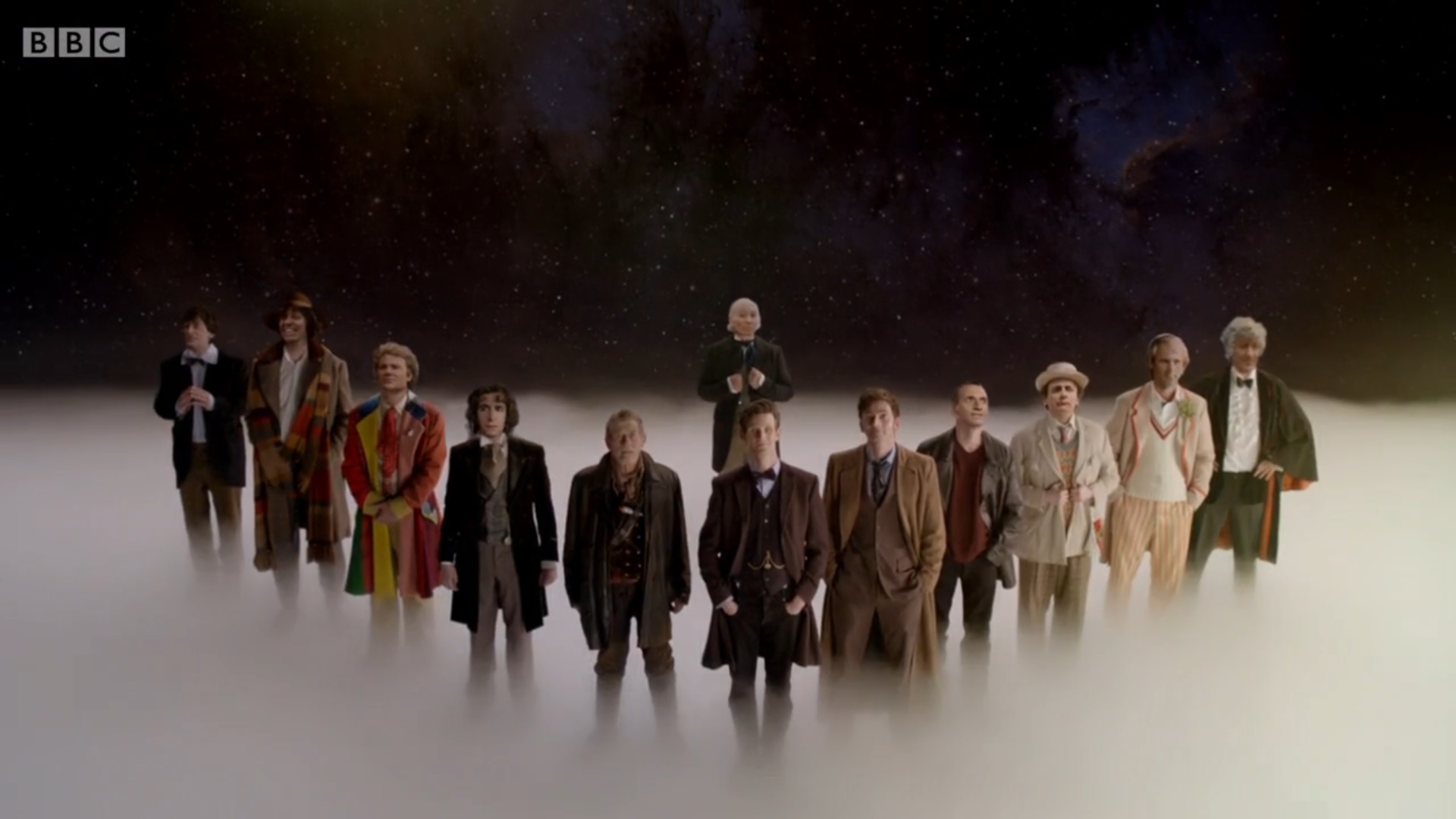 There's already a lot of great research here, but perhaps there's a theory that fits all of this together if it comes off as plausible. Many things in reality can be represented by harmonic systems, progressing a period and repeating or evolving. Perhaps each regeneration cycle is less of a full life span and more of a single period in a much longer wave. So at the end of each cycle, the Timelord reaches a point of unity and will take on a new "title" or name. It's a larger regeneration with less continuity. This doesn't account for everything, but it's food for thought, though.

From episode 239 "The Name of the Doctor" Inside The Doctor's grave, we are shown a beam of light which is said to be "the scar tissue" of his journey through time. The Doctor describes the light as both his past and his future.

But after Clara travels down the time tunnel, and sees the forgotten incarnation, she says:

"But I never saw that one. I saw all of you. Eleven faces, all of them you! You're the eleventh Doctor!"

Why was she unable to see the Peter Capaldi doctor or any other Doctor that followed?

This would make sense. Counting The War Doctor and Ten's regeneration into himself, Eleven has already gone through twelve regenerations. If each cycle has only these twelve regenerations, the reason that Clara couldn't see any farther to Peter Capaldi is that he is the first in a new cycle. Again, this doesn't reconcile everything, but it's some speculative evidence at the very least.

The Doctor has said or implied several times that the Harnell The Doctor is the first. At least one is what judges call an "excited utterance".
Hartnel The Doctor in The Five Doctors: Goodness me! So, there are five of me now!
The Matt Smith The Doctor is at least the eleventh. The mind-bending game included more than two "pre-Hartnell" images. Since they could not all be pre-Hartnell images, I infer that none of them were. Morbius did not recognize them, so they were not his images either. Morbius had believed that the Hartnell The Doctor was the first The Doctor, but the images persuaded him otherwise: "How many of you are there?" At the time, the answer was four, just what Morbius had thought it was. From the preceding, I infer that The Doctor "cheated". The images were things made up by The Doctor to avoid losing the contest. That The Doctor or anyone else could do that was not something that Morbius had considered.

Edit: I viewed the Morbius clip. It seems I was wrong about Morbius's knowledge and beliefs about The Doctor. That said, the conclusion still stands. The "pre-Hartnell" images could not all have been pre-Hartnell images and they were not Morbius images. They were "cheats" generated by The Doctor.

The Time of the Doctor firmly establishes that Hartnell's Doctor was indeed the First.

In dialogue with Clara, The Doctor explains that he is the 11th Doctor, not including the War Doctor. This makes twelve total incarnations. The Doctor further explains that the first time the Tenth Doctor regenerated, he didn't change his face for "vanity reasons", totaling twelve regeneration cycles. By deduction, Hartnell is the First Doctor.

20
Why couldn't Clara see future incarnations past the "11th" doctor?

12
How does River Song know when and how she died?
8
When did he become just "The Doctor"?
19
Was Gallifreyan history really changed in The Day of the Doctor?
12
Was the Doctor’s TARDIS inside Clara’s?
12
Why did the TARDIS take them to the Doctor's childhood and why didn't she want the Doctor to know where they were?
7
Was Clara's "I love you" directed at the Doctor?
9
If the Doctor was the last of the Time Lords, what happened to Susan?
9
When was Peter Capaldi's Doctor in "Day of the Doctor"?
6
In-universe reason for Peter Purves having two distinct parts in "The Chase"