Excerpt from A Dance with Dragons ahead:

The old Valyrian road glimmered ahead of them like a long silver ribbon winding through wood and dale. For a little while Tyrion Lannister felt almost at peace. "Lomas Longstrider told it true. The road's a wonder."

"Lomas Longstrider?" asked Duck. "A scribe, long dead," said Haldon. "He spent his life traveling the world and writing about the lands he visited in two books he called Wonders and Wonders Made by Man."

"An uncle of mine gave them to me when I was just a boy," said Tyrion. "I read them until they fell to pieces."

"The gods made seven wonders, and mortal man made nine," quoted the Halfmaester.

A Dance with Dragons, Tyrion III

Tyrion and his companions mention seven wonders of nature and nine wonders crafted by men. The roads of Valyria are the fourth of the nine. Do we know what the other fifteen wonders are? I would assume The Wall to be another of the nine made by men.

The wonders made by man

Only a few have been named. According to westeros.org as my source:

And less canon, but still notable.

It may be implied in the text that the ruins of the Great Pyramid of Ghis, which we're told Lomas Longstrider visited, may also number among them.

Speculatively, fans have considered the possibility of the Hightower of Oldtown, Harrenhal and the Five Forts being among the other man-made wonders.

The above text was from westeros.org as well.

Wonders made by nature

The books don't talk about this to my knowledge. But the non-canon links touch upon them a bit.

Out of the seven Wonders we only know of one for sure but have a handful of other possible ones but nothing confirmed.

A cavern system near Norvos

One cavern system, some hundred leagues northwest of Norvos, is so vast and deep that legend claims it is the entrance to the underworld; Lomas Longstrider visited it once and counted it as one of the world's seven natural wonders in his book Wonders.
The World of Ice and Fire, The Free Cities: Norvos

The A Wiki of Ice and Fire page on the Wonders gives two possible examples The Bones and the Mountains to the east of the Dothraki Sea.

A group of islands in The Summer Isles are listed as being a potential. 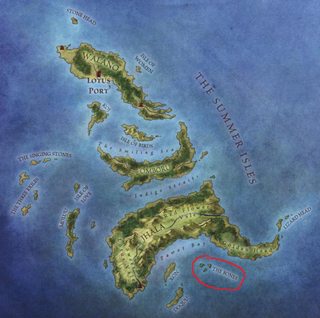 The Lands of Ice and Fire, The Known World: The Summer Isles

Mountains to the east of the Dothraki Sea

East, beyond Vaes Dothrak and the Mother of Mountains, the grasslands give way to rolling plains and woods, and the earth beneath the traveler's feet turns hard and stony and begins to climb upward, ever upward. The hills grow wilder and steeper, and soon enough the mountains appear in the far distance, their great peaks seeming to float against the eastern sky, blue-grey giants so huge and jagged and menacing *that even Lomas Longstrider, that dauntless wanderer (if his tales be true),*lost heart at the sight of them, believing that he had at last reached the ends of the earth.
The World of Ice and Fire, The Bones and Beyond

Personally I'd suspect that Vaes Dothrak, The Lands of Always Winter and the Lands of the Long Summer are among the Wonders too but that's just speculation.

The Citadel also speculates on the following being amongst the Wonders.

The natural wonders are not known, though readers have suggested that Casterly Rock and perhaps the Giant’s Lance might fit, as well as the Rhoyne, the Shadow, the Mother of Mountains, and the Fourteen Flames, among others.
The Citadel, Which are the 16 Wonders of the World?

Wonders Made by Man

Out of the nine Wonders Made by Man we have seven known ones and quite a few potential candidates for the last two spots.

"The gods made seven wonders, and mortal man made nine," quoted the Halfmaester. "Rather impious of mortal man to do the gods two better, but there you are. The stone roads of Valyria were one of Longstrider's nine. The fifth, I believe."
"The fourth," said Tyrion, who had committed all sixteen of the wonders to memory as a boy.
A Dance with Dragons, Tyrion III

It was not always so. Whether the legends are true or not, it is plain that the First Men and the children of the forest (and even the giants, if we take the word of the singers) feared something enough that it drove them to begin raising the Wall. And this great construction, as simple as it is, is justly accounted among the wonders of the world.
The World of Ice and Fire, The Wall and Beyond: The Night’s Watch

The Titan of Braavos

The following quote implies the Titan is one of the wonders, however, apparently George R. R. Martin states it is in this interview but I don't have time to watch it yet.

Lomas Longstrider marveled at the Titan of Braavos—the great fortress of stone and bronze in the shape of a warrior that bestrides the main entrance into the lagoon—but the true wonder is the Arsenal.
The World of Ice and Fire, The Free Cities: Braavos

The triple walls of Qarth

"We could sail to Qarth," Penny went on. "The streets are paved with jade there, my brother always said. The city walls are one of the wonders of the world. When we perform in Qarth, gold and silver will rain down on us, you'll see."
"Some of those ships out on the bay are Qartheen," Tyrion reminded her. "Lomas Longstrider saw the walls of Qarth. His books suffice for me. I have gone as far east as I intend to go."
A Dance with Dragons, Tyrion XI

The three bells of Norvos

No account of Great Norvos is complete without a mention of the city's three bells, whose peals govern every aspect of city life, telling the Norvoshi when to rise, when to sleep, when to work, when to rest, when to take arms, when to pray (often), and even when they are permitted to have carnal relations (rather less often, if the tales be true). Each of the bells has its own distinctive "voice," whose sound is known to all true Norvoshi. The bells bear the names Noom, Narrah, and Nyel; Lomas Longstride was so taken by them that he named them one of his nine Wonders Made by Man.
The World of Ice and Fire, The Free Cities: Norvos

The Long Bridge of Volantis

Those same tides and currents, and the river's width, made the building an epic task, requiring more than forty years and many millions of honors. Triarch Vhalaso did not live to see what he had wrought...but once completed, the Long Bridge had no rivals save for the Bridge of Dream in the Rhoynar festival city of Chroyane. Strong enough to support the weight of a thousand elephants (or so it is claimed), the Long Bridge of Volantis stands today as the longest bridge in all the known world. Lomas Longstrider named it one of the nine wonders made by man in his book of that title.
The World of Ice and Fire, The Free Cities: Volantis

The Palace With a Thousand Rooms in Sarnath

Even in the Seven Kingdoms, the glory of Sarnath of the Tall Towers was celebrated, and Lomas Longstrider included the Palace With a Thousand Rooms amongst his nine Wonders Made by Man.
The World of Ice and Fire, Beyond the Free Cities: The Grasslands

It's worth noting though that this wonder was destroyed by Khal Loso and his Dothraki.

Bereft of defenders, Sarnath of the Tall Towers fell to Loso the Lame less than a fortnight later. Not even the Palace With a Thousand Rooms was spared when Khal Loso put the city to the torch.
ibid

The wiki page speculates the following as possible Wonders Made by Man.

Speculatively, fans have considered the possibility of the Hightower of Oldtown, the tallest structure in the Seven Kingdoms, Harrenhal, the largest castle in the Seven Kingdoms, and the Five Forts, a massive fortress along the northeastern boundaries of the Golden Empire of Yi Ti, as being among the other man-made wonders.
A wiki of Ice and Fire, Wonders Made by Man

It also lists the following two which seem more likely to fill the remaining two spots as Longstrider is known to have visited them.

The Great Pyramid of Ghis

The festival city of Chroyane

Lomas Longstrider, in his Wonders Made by Man, recounts meeting descendants of the Rhoynar in the ruins of the festival city of Chroyane who have tales of a darkness that made the Rhoyne dwindle and disappear, her waters frozen as far south as the joining of the Selhoru. According to these tales, the return of the sun came only when a hero convinced Mother Rhoyne's many children—lesser gods such as the Crab King and the Old Man of the River—to put aside their bickering and join together to sing a secret song that brought back the day.
The World of Ice and Fire, Ancient History: The Long Night

Of the Wonders made by the gods, none so far have been mentioned. But of the man-made Wonders, we know of four:

13
Which Wonders and Wonders Made by Man has Tyrion visited?