How does Elsa resolve the practical problems of living in an ice palace?

While Elsa's ice magic is aesthetically effective on a superficial architectural level, the choice of ice as a fundamental building material presents a number of practical difficulties. How, for example, does Elsa's construction manage its water supply? Pipes of ice would freeze the liquid they were made to transport. How does she dispose of sewage? How does she cook food when the introduction of heat would melt the building?

All these questions were posed to me by my precocious six-year-old daughter. My son, who wants to be an architect, now taunts us about it every time we watch Frozen. Does anyone have any possible solutions, in or out of canon?

The original concept art for Frozen shows a few additional features that were ultimately removed from the film: 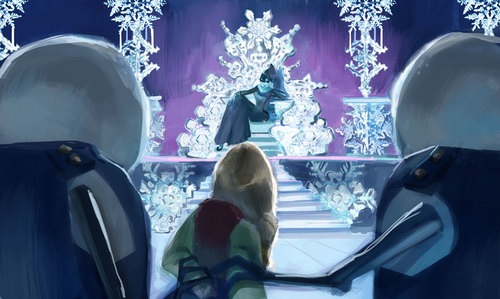 Marina Vickery : What does Elsa eat in her ice castle? Serious question lol my son wants to know

It seems reasonable that she could simply melt some snow when she gets thirsty.

History doesn't record where the Ice Queen poops but I suspect that there's an ice toilet somewhere in the palace, complete with an ice bidet. Well, she did say that the cold doesn't bother her...

If you consider the technological state of Frozen to the late medieval period, you'll find that these questions are largely not problems.

In medieval castles, you pooped (sorry, disposed of sewage) into a hole in the wall. Covered with appropriate furnishings, but basically its a hole in the wall. Some peasant had the unenviable task of coming along to the base of the castle walls to shovel it up and take it away for (presumably) crop fertiliser.

Food was also cooked elsewhere in the castle and brought to table. The high risk of fire in those days where most things were made of wood and cloth, with lots of flammable materials such as straw and hay for livestock were lying around meant your kitchens were built reasonably far away from the main hall. Sure, this does raise the issue of heating in an ice palace where deep-set, stone fireplaces were used, but I guess anyone living in an ice palace wouldn't feel the cold like most.

Water supply would also have not been piped running water, but brought to where needed in jugs, sourced from a well. Hot water would have been heated in the communal kitchen and brought to you.

If your son wants to be an architect, you should encourage him to come up with solutions to these problems, not taunts! One day he might be the most famous architect of all Norway for his imaginative architecture

Elsa could have dealt with the food issue by conjuring up snow cones and ice cream, or making snowmen to hunt and gather for her. It's possible that she may not have gotten hungry yet when Anna came to visit. Sure, it had been a couple of days, but (a) she could have over-indulged at her coronation dinner, and (b) she may have a lower body temperature than normal humans, and thus not need to eat as much.

But in general, I think the best explanation is that Elsa wasn't thinking long-term. Running away from Arendelle and building the ice palace was an impulsive decision, and she was too blinded by the euphoria of being “free” to think too hard about mundane concerns like maintaining a septic system, or even official-izing her abdication from the throne of Arendelle.

Many fairy tales mention that ice, created by magic, especially evil one, does not melt from simple heat. Or may be Ice Queen has body temperature below zero. Any of which would make ice the perfect building material.
In reality, lying covered with snow, or even better, in a tight hole in snow, is much warmer than on the surface of the snow at night. Both animals and travellers know that.
Then, ordinary humans resting release only 60 joules of heat per second. And you need 1 500 000 joules to melt 5 kg of ice. So you will not damage ice castle. The more interesting question is how to protect either yourself from cold air or small items from warm air. There are some chemicals, that look and behave like ice, but freeze at different temperatures.
Finally, if ice was created and kept under enormous pressure, it can withstand temperatures up to 400C. May be Ice Queen knows how to make that ice without pressure?

If you recall the ending, there is an obvious canonical solution. She simply has to project love onto whatever she wants to thaw. For full effectiveness, it is recommended to direct the love toward indoor plumbing in general, not the sewage itself. As far as cooking goes, she would just have to keep putting energy into keeping the surroundings from thawing. Apparently her abilities allow her to do this with no conscious effort, or else Arendelle would have started to thaw naturally after she left.

As a thought exercise for your son, consider that your freezer is likely close to your oven. Ask him why the ice in the freezer doesn't melt when the stove is on and how the ice maker manages to be supplied with water. It's a combination of insulation and continuous input of energy to transfer the heat. In something made purely of ice, the energy input would be the dominant factor.

Let's take the idea of practical magic and run with it, shall we? A quick glance into Thermodynamics allows us to see that there is no such thing as "cold", just lack of heat. Elsa (and Frozone, and Iceman, etc) can NOT actually "project" ice and cold. Instead, she has a magical ability to selectively absorb energy from her environment. Control over this energy absorption can lead her to be able to create ice sculptures as long as there is water in the air to condense. Remember when she took her gloves off and held the metal objects for the Queen ceremony? Water immediately began condensing and freezing on the metal surface, because metal is a good conductor. It stands to reason someone who has this ability would likely have conductive objects have energy drawn from them faster, especially via contact.

I'm building up to the following answer: Elsa can, in fact, rely upon her magic to not need to worry about solid waste removal, water collection, and food preparation. She is taking the energy out of the environment, and it's gotta go somewhere. Likely she is absorbing it directly in to herself (she was locked in a room with no visitors for many years since her parents croaked, the guards were not allowed to visit). She is, in essence, "eating" the energy she requires right out of the environment itself, so it stands to reason that she wouldn't get hungry. And, if she is not consuming solid foods in any way, there's no reason for her to need a system for solid waste removal. Her water intake can be explained by water in the air directly condensing in her lungs (also, she can condense large quantities of water right out of the air, so more if necessary is available on demand), at a rate which can be absorbed into her blood stream, leaving only the issue of liquid waste removal. Due to her unique metabolic situation (she absorbs energy from her environment) there is likely less waste and more efficiency. But as an engineer, I'm not going to handwave this away with magic, because Thermodynamics might explain the reason for everything else, but Thermo also says the scant waste has to go SOMEWHERE. So, Ice Chamber Pot for peeing, and that's it.

Elsa and her Ice Palace are not governed by the laws of nature, but instead by the vivid imagination of Disney artists.

SamSam
21
Add a comment  |
Highly active question. Earn 10 reputation (not counting the association bonus) in order to answer this question. The reputation requirement helps protect this question from spam and non-answer activity.

Not the answer you're looking for? Browse other questions tagged frozen architecture or ask your own question.