Story about the devil's note

Okay the question may not be very clear as it is hard to explain this book in brief.

Basically it involves a schizophrenic person who is constantly seeing a little thing/person/demon (maybe a leprechaun; I don't remember) who is kind of like a twisted version of the Great Gazoo 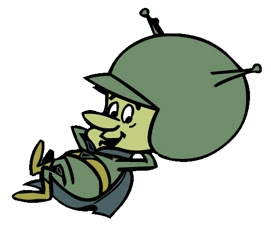 He then stumbles upon a conspiracy based around the legend of Robert Johnson's deal with the Devil. It extended to include a lost 30th song recorded by Johnson before his death and something to do with the devil's note.
It also showed that Elvis was alive at the time (early 2000s) by means of a symbiotic alien/bug.
It was set in England if that helps.

You'd think that with all the weirdness I'd remember the name of the book.

The Da-Da-De-Da-Da Code, by British author Robert Rankin? Here's the blurb, as quoted on amazon.co.uk (emphases mine):

Jonny Hooker has been picked as a WINNER! and all he has to do to claim his prize is to solve the Da-da-de-da-da Code. Jonny knows that beat; it always turns up in popular music - like 'Waltzing Matilda', or the National Anthem. And it has something to do with the Devil's Chord. And with Robert Johnson (who sold his soul to the Devil), whose blues influenced a generation of musicians. And it definitely has something to do with Elvis, who is still alive and rocking (of course). And with the Secret Parliament of Five, who meet in Gunnersbury Park to dictate world affairs.

And when he solves the Da-da-de-da-da Code, Jonny will also discover why all the most famous rock musicians die aged twenty-seven, the truth about raising an ancient god, and the destruction of the world. It's all right there in the music. All Jonny has to do is to crack that code. Before he dies on Monday.

19
Story about demons in the ethernet
10
Looking for a short story involving a Devil's Tuning Fork - 1995ish
3
The Devil's or Death's daughter running a bar for supernaturals?
5
asteroid pirate; the devil's wife
9
The Devil's Keep
6
Story of the devil's deal with a man to have riches and status