How big is the Marauder's Map?

The size of the Marauder's Map always bothered me. I assumed it unfolded into a large but still manageable piece of parchment. However, the fact that it shows the entirety of Hogwarts - every floor and the grounds - but also showed a miniature Harry dot holding a miniature wand to instruct real Harry on getting into Hogsmeade, seems impossible.

How big would the map have to be to include that much detail? (Especially given that Harry's eyesight isn't great.)

The books don’t give much description of the size of the map. This is how it’s described when Harry first sees it:

Fred pulled something from inside his cloak with a flourish and laid it on one of the desks. It was a large, square, very worn piece of parchment with nothing written on it. Harry, suspecting one of Fred and George’s jokes, stared at it.

The book seems to imagine it as a single plane: I can’t find any mention of flaps or folds like in the films, there’s talk of Harry “rolling up” the parchment (imagine what that would do if it was a folding page), and everything seems visible at once.

We don’t know how large a desk is, and how well it fits on said desk, but it gives a rough idea of how big it might be.

This map is much more intricate, with folds and flaps and fiddly bits. I suspect this is more realistic a design for mapping most of Hogwarts Castle.

The Noble Collection will sell you a replica map based on the prop, and their product page gives us the dimensions:

When they say “open”, this means the largest folds: there’s additional area because it doesn’t count some of the smaller flaps, such as right at the centre of the map itself: 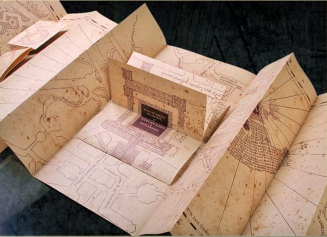 That seems like a more realistic size, if you suppose that the different floors appear in a horizontal row across the map.

J.K. Rowling has drawn her own map of Hogwarts, which appears on the Prisoner of Azkaban DVD extras and can be seen on the HP Lexicon. The detail is impeccable and I feel it could easily substitute for the Marauder’s Map, yet it fits on a single sheet of A4: 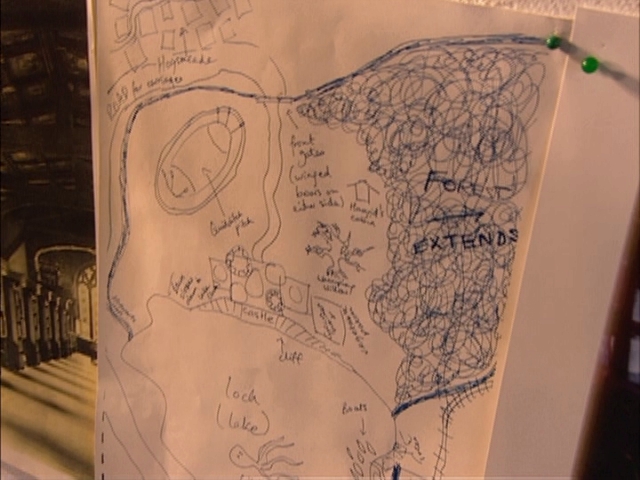 I always imagined the Marauder's Map as being able to fold up to have about the same surface area of a normal piece of printer paper, but obviously when you unfold it for use it would be much larger. Harry is able to store it in the pockets of his robes, and when he drops it in Goblet of Fire after his bath, it is unobtrusive enough that the professors do not immeadiately notice it sitting on the floor, so the folded version can't be very big. I do, however, own the prop replica from the movies, and it's enourmous! It's 15.5'' by 72'' when unfolded, and it has a few other flaps to show more. There's nothing on the back, though, and it doesn't appear to be the entire castle, even if it is what they used in the movie. When I read the books, I imagine that it wouldn't open to be quite that big all at once, but it would have more layers and flaps. As for detail, it does seem like that would be a challenge. Yet, it is noted that the writing the names and speech bubble appear in are miniscule, so the map was clearly made to be as small as possible.

Not the answer you're looking for? Browse other questions tagged harry-potter magical-items marauders-map or ask your own question.