How does Lava Bending work?

I was wondering but how exactly does Lava Bending work? 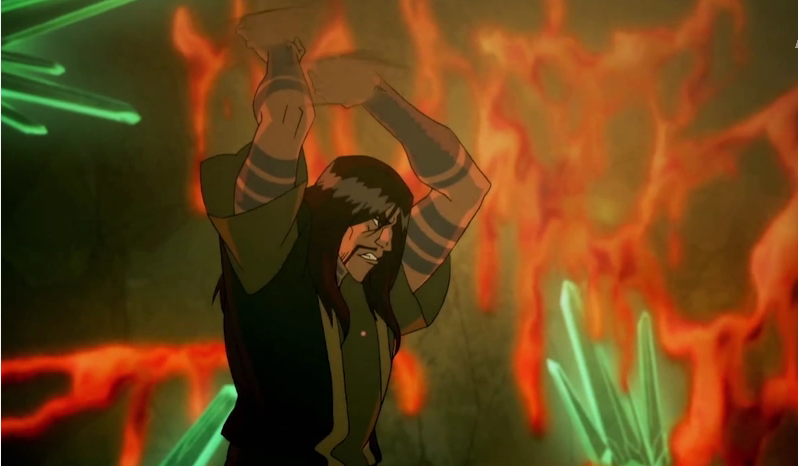 In The Legend of Korra it didn't seem to be explained at all. I was wondering but isn't Lava supposed to be a firebending ability?

I don't have a picture, but remember back in Avatar: The Last Airbender, when Roku destroyed the Fire Sages temple dedicated to Avatar Roku himself, that he used a combination of firebending to bend the lava to destroy everything.

So how is it possible to do Lava bending if you're an Earth Bender? Does that mean that a Lava Bender could bend fire as well as earth? Wouldn't Lava Bending require bending heat/fire?

Lavabending is a technique which involves the manipulation of molten rock. The technique is typically only performed by fully realized Avatars while in the Avatar State in order to accomplish complex feats of bending. The first known user of this technique was the Fire Nation Avatar who preceded Yangchen, who used it to cause the simultaneous eruption of small four volcanoes. - ↑ Ehasz, Aaron, Ehasz, Elizabeth Welch, Hedrick, Tim, O'Bryan, John (writers) & Volpe, Giancarlo (director). (March 17, 2006). "The Avatar State". Avatar: The Last Airbender. Season 2. Episode 1. Nickelodeon.

From its rarity, it can be assumed lava-bending is not a common ability. We have only ever seen 5 people (Kyoshi, Yangchen, Ghazan, Bolin) and Avatar Roku perform it. Lava-bending appears to be an extension of the Earthbending technique. This would be the second such extension of Earthbending with Metal-bending being the first. 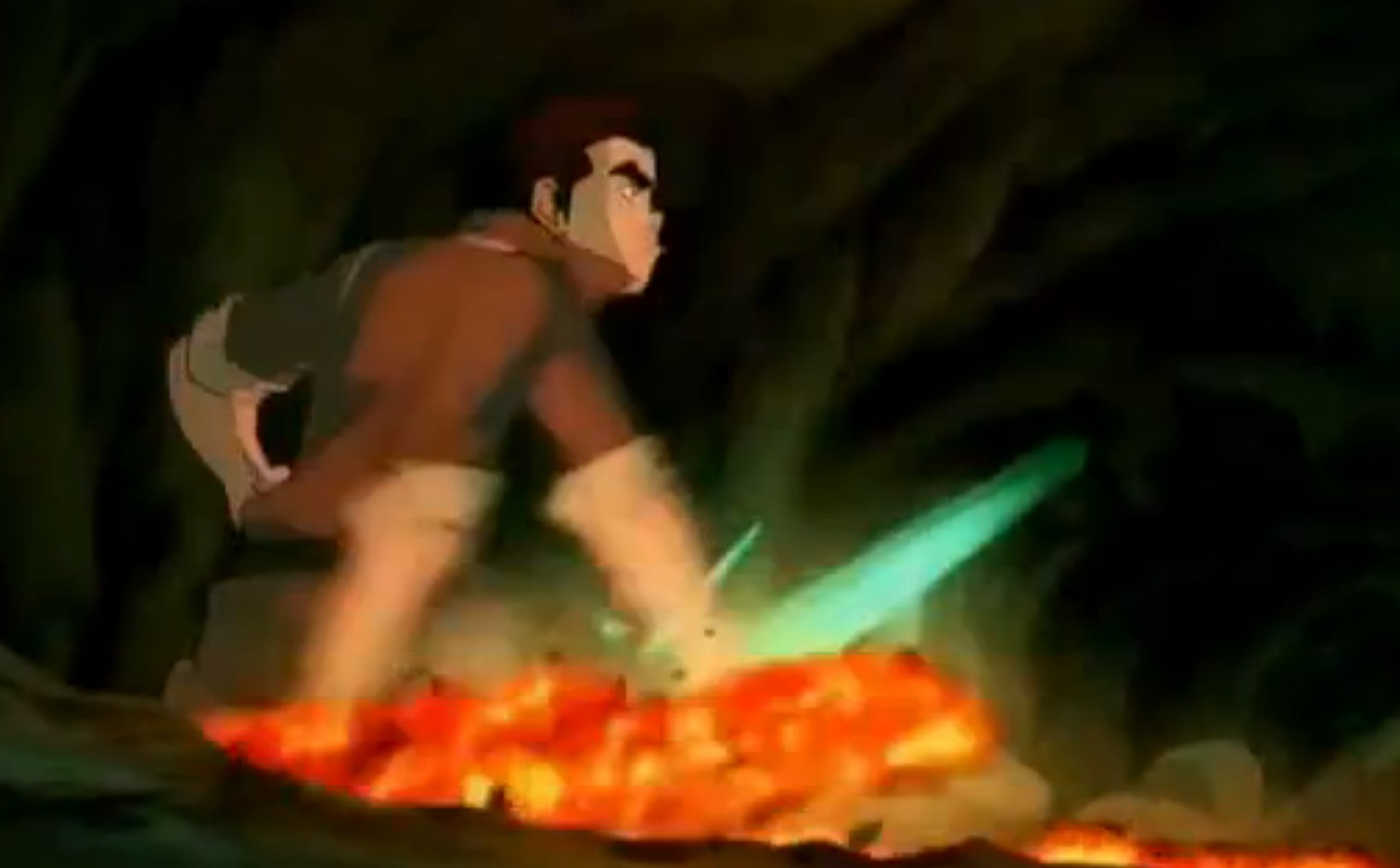 Bolin lava-bending, apparently dipping his hand into molten lava to throw it at his opponent, Ghazan, with no fear of being burned.

Bolin's brother Mako is an accomplished fire-bender and since there have been questions regarding heritage and bending, perhaps this is an indication that capacities in bending may have more to do with genetic heritage than previously supposed. Bolin had no capacity for metal-bending at all, so the two advanced abilities may be mutually exclusive.

Lava bending is literally just the opposite of ice bending, water benders are able to cool water down into ice and some earth benders (Gazon and Bolin) are able to heat the earth up so it melts into lava.

Lava bending isn't available to fire benders as lava is molten earth, lava can cause fires, but lava isn't fire itself. However, I do remember Fire Lord Sozin turning lava back into solid earth by extracting the heat from the lava. Knowing this, I'm questioning why Mako didn't use this technique when Gazon trapped him and the others in the air temple. The only reason I could think of is that he didn't learn the technique.

Why lava bending is so rare and ice bending is a skill that basically every water bender has confuses me quite a bit as the techniques don't really differ that much.

Stand back. I'm going to try science. Let's recall the mud wrestling scene with Toph and Katara. Neither of them had a problem with the mud. They just found their element within it and went nuts. Metal is a form of earth. Really, really pure, processed bits of very select earth. Easy enough to bend if you concentrate hard. Oddly enough, one would think lava would be even easier since it's just plain earth. Raw, unrefined, completely mixed up earth. Have you ever really looked at a piece of igneous rock? Especially an intrusive one? It's got a bit of everything in there. If you're lucky enough to get a bit that's happened to cool very slowly you don't even have to look so hard. Try your granite counter tops, or your wealthy friends' granite counter tops. OK Now, on to the mystic. Lava is earth + fire. Since the Fire Nation were some big baddies, I imagine the rarity of lava benders is more of a cultural aversion. If not, it would simply be a matter of "Oh, this is just rock. I'll stop it now." Lightning is fire + air. Among Firebenders, lightning bending is unusual. Not exceptionally rare, just unusual. Then we have, among the Firebenders, Combustion Man and that woman who I am to tired to recall her name. At least a couple different variations among the Firebending people. They're not hug up on themselves.

I think that lavabending is simply liquid earthbending. It could be rare because, as with metalbending, people did not realize the connection between metal and earth and, in this case, lava and earth. Once they did, the ability became common. Again, this is simply a hypothesis but metalbending was once considered rare only because there were no good teachers of it until Toph. Furthermore, I posit that firebenders can CREATE lava, but they are not able to BEND it. For example, I am confident that any firebender could heat up a piece of earth until it liquefied. The masters could presumably do this rapidly and produce hotter lava. However, it will simply remain that: a pool of lava. Great for short-range defense but, without the ability to actually move the lava, it does not serve as an offense for firebenders.

In my opinion both would be able to bend lava. Moreso earthbenders than fire since there is a direct connection as earth and lava are elementally the same. I think only super powerful firebenders would be able to connect with the energy within lava to bend it. Firebending is the connection with one's chi, energy within one's body, that is creating fire. We see firebenders using the outside fire which is energy and Iroh demonstrated that by connecting his energy with another's incoming lightning he could manipulate it and redirect it giving us an instance where a firebender is capable of connecting with outside energy. It stands to reason that a powerful enough firebender with enough control of energy within himself to connect to the energy of lava to be able to bend it. Looking to How Sozin made the lava solidify, I hypothesize that he was in fact connected to the energy of the lava and was draining the lava of its energy slowing down the molecules to solidify. So the connection in essence is the difference to how the two benders would bend the lava. Earthbenders with a direct connection to the lava itself and Firebenders to the energy of the lava

Lava Bending is 100% not Earth Bending. The writers explicitly show lava bending as an immensely powerful form of fire bending in Season 2 Episode 1 of Avatar: The Last Airbender. Aang is trying to figure out how to control the avatar state with the earth kingdom general, and Avatar Roku decides:

It is time you learned. The glow, is a combination of the knowledge and power of all of your past lives.

As Roku is saying this line, we are literally given 4 separate images of avatars performing powerful feats of bending for each element. We see Kioshi, the last earth kingdom avatar, perform an incredible earth bending feat. We then see the last water bending and Air bending Avatars perform their own huge feats, then the second to last fire bending avatar bends lava out of four volcanoes (The last fire bender being Roku which they didn't want to show for some reason).

On top of this, in the first season of Avatar the Last Airbender, in the double episode 'The Solstice' Part 1 and 2, we see Avatar Roku lava bend to destroy the FIRE NATION, FIRE SAGE TEMPLE. This all takes place in the Fire Nation, with a ton of fire benders around, and there is just a lot of fire going on. It would not make sense that they would have Avatar Roku do an advanced form of earth bending to destroy a Fire Sage temple in the Fire Nation with plenty of fire benders to witness it.

Lava is made up of crystals, And crystals are rock,Crystals are most definitely rocks, but not all rocks are crystals.
Crystals and rocks form in similar ways, either with heat, or time and water or oil. The ability of lava bending is a form of Tophs seismic sense. The weilder uses it to find the tiny crystal inside the Lava and manipulate them.

My guess is that works in a similar way to how waterbenders are able to alter the state of the water they control, able to turn it into ice or steam. However, while almost all waterbenders are able to utilise ice or steam I believe the number of lavabenders is much lower because it would take much more energy to turn rock into lava that it would water into steam. Due to lava's liquid nature, you'd also need to completely change your fighting style: normal earthbending moves are typically rigid and stiff, whereas Ghazan's technique was much close to waterbending than standard earthbender.

As for turning the earth into lava, I think it works by pressuring the rocks, as we saw Ghazan spinning the rocks very fast when we broke out of prison, and he always seemed to punch downward when making lava.

Firebenders are able to "bend" or redirect the heat from the lava. Avatar Roku did this while trying to save his hometown from being destroyed by the volcano. Lava is however molten earth so is a sub skill of Earthbending.

Lava bending is an Earth bending skill. It requires the Earthbender to cause the molecules in the earth to vibrate rapidly, creating heat and liquefying the rock into lava. They would then bend the rock that was just liquified.

Lava bending is so rare because of it’s difficulty, you may have to simply be born with enough bending potential.

Not the answer you're looking for? Browse other questions tagged avatar-the-last-airbender the-legend-of-korra bending or ask your own question.

7
Why aren't there any airbenders in Profession Tournament Bending?
11
How does each bender produce his or her element?
13
How can Wan's history be reconciled with legend?
5
Could Vaatu's release create a second Avatar?
3
If an avatar goes into the avatar state while being poisoned, do they still die?
15
In the Avatar world, what exactly are they bending?
4
What exactly is the Avatar's ability to turn into another Avatar?
3
What are all the types of bending?
3
How come Korra could bend three elements so young before training?
8
How were people first born with bending abilities?