During the production and screenwriting of Empire Strikes Back, was it Leia who was planned to be "The Other"?

In Empire Strikes Back, Yoda says to the spirit of Obi-Wan:

Obi-Wan: "that boy is our last hope"
Yoda: "There is another"

And in Return of the Jedi, they reveal that he was talking about Leia. That's all well and good in an in-universe sense.

But from the production perspective, Leia being Luke's sister was only put in when Return of the Jedi was being written because.. 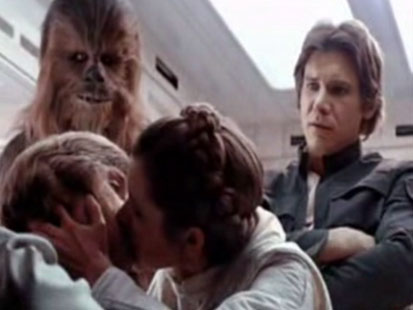 So who was supposed to be the other hope?

Just to be clear, I had read the question Who was Yoda refering to when he said “There is another”? before I posted mine. But while there the person is looking for an in-universe answer, I am asking more from the production and writing point of view.

Obviously, it's impossible to say exactly what Lucas was thinking, but there are some hints in very early drafts of The Empire Strikes Back that when he originally wrote the line he didn't think it would refer to Leia.

The very first Empire draft was written by Leigh Brackett in 1977 and annotated by Lucas. In this draft, Vader is not Luke's father, he actually killed Luke's Father. In one scene, Luke summons the spirit of Ben, and he brings the spirit of the elder Skywalker: 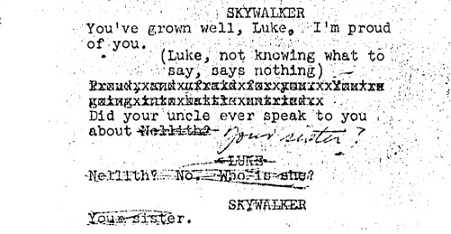 Brackett named this sister "Nellith", and Luke's father says they're "far apart" for safety, so there's the impression this isn't a character we've met.

In the very next draft (wholly written by Lucas), Vader became Luke's father, and this scene vanished. But there's a quote from an interview with Empire producer Gary Kurtz:

"[Leia]'s not his sister that dropped in to wrap up everything neatly. His sister was someone else way over on the other side of the galaxy and she wasn’t going to show up until the next episode."

So perhaps Lucas was still thinking about this idea -- a sister hidden on the other side of the galaxy -- when he wrote the "there is another" line in the final draft. This is probably the closest you'll get to an answer.

A little more detail and scans of the entire scene from that first draft available here. And there's even a PDF of Brackett's entire draft, complete with Yoda named "Minch", Han never being frozen, Lando "Kadar", and other weird stuff.

Lucas certainly didn't share with the cast/crew what his thoughts were about "the other". Mark Hammill seems to have felt that the line was thrown in an a trapdoor, allowing Lucas to make a third film without necessarily including him, in much the same way that Han Solo was left in carbonite.

In an on-set interview during the filming of Star Wars : Empire Strikes Back he told Alan Arnold that he didn't know the identity of the other potential Jedi:

MH : So George has given himself the option. Han is not vital to future stories. It's up to Harrison, I guess, as to whether Han comes back into the saga.

Alan Arnold: Do you feel you, too, could be written out?

MH: It's already been taken care of. Ben Kenobi says to Yoda: "Luke is our only hope." Yoda shakes his head: "No," he says, "no, there is another." So, you see, George could write me out.

AA: Does that worry you?

MH: Well, it shows they're not going to let me become what Sean Connery was to the James Bond movies. If, for some reason, I don't want to do the next one, or gave them so much trouble that they didn't want to use me, then they could easily discover a long-lost sister or brother of Luke's living in another part of the galaxy.

49
To whom was Yoda referring when he said, "There is another?"
93
Why couldn't the Jedi detect Senator Palpatine as having powers?
43
Is it important for the plot that Leia is Luke's sister?

48
Did Yoda Intend On Training Leia As a Jedi?
49
To whom was Yoda referring when he said, "There is another?"
28
Did Yoda definitely know who the other hope was?
46
Who/what exactly does Darth Vader believe taught Luke between the events of “The Empire Strikes Back” and “Return of the Jedi?”
2
Why were Luke and Leia the Jedi's last hope?
71
Was Luke in “Return of the Jedi” really “better” than Obi Wan in “Revenge of the Sith?”
49
At the end of Return of the Jedi, did Darth Vader learn that Princess Leia was his daughter?
9
Do Obi-Wan Kenobi and Yoda know these characters are alive during the time of the Original Trilogy?
7
How did Obi-Wan not know about Leia in Episode 5?